This was a low key trail build day.  On the February build day we’d shifted 20 tonnes in record time and ended up with stock piles of material in strategic locations round the trail.

The plan for the day was to finish and open the wood section in the triangle.  This had been almost finished back  in January.  Jez, Ricky and Gary (Gary 5) got straight on with wood task.

Meanwhile Phil, Tom, Pawel and Sarah marked out the entrance path, dug it out and then filled it with limestone. The short section off the end of the first logs to the start of the extended raised section was also filled in. Chris came along with a broken gas stove and then Kate arrived to help too.

With the wood section officially opened then a lot of OCD pothole filling was done in the area. Some serious water damage was discovered in the back alley and  it was necessary to shift material from a more remote gravel stockpile to fill this.  The distance was around 300m and three people did about 6 journeys each. That means they walked 1.8km pushing a wheel barrow. Good training for something. The Garmin log from the build day shows 7.5km total distance walked. 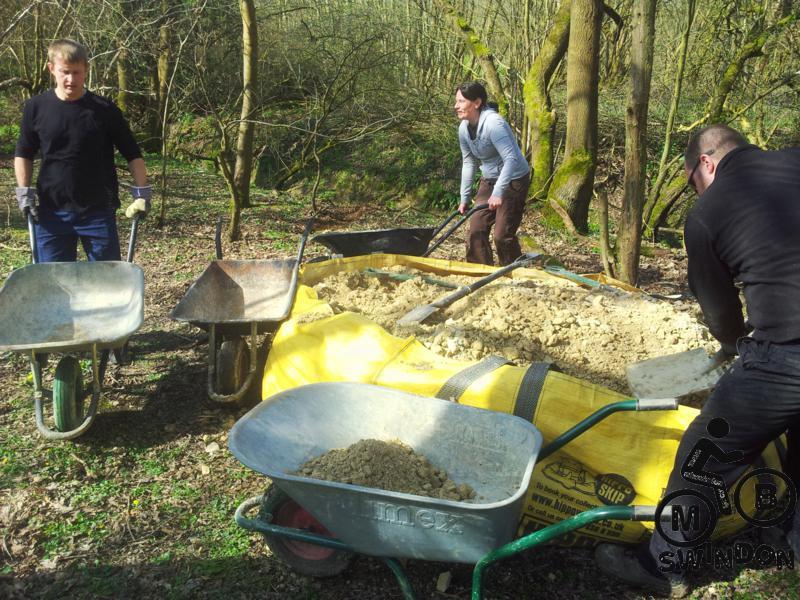 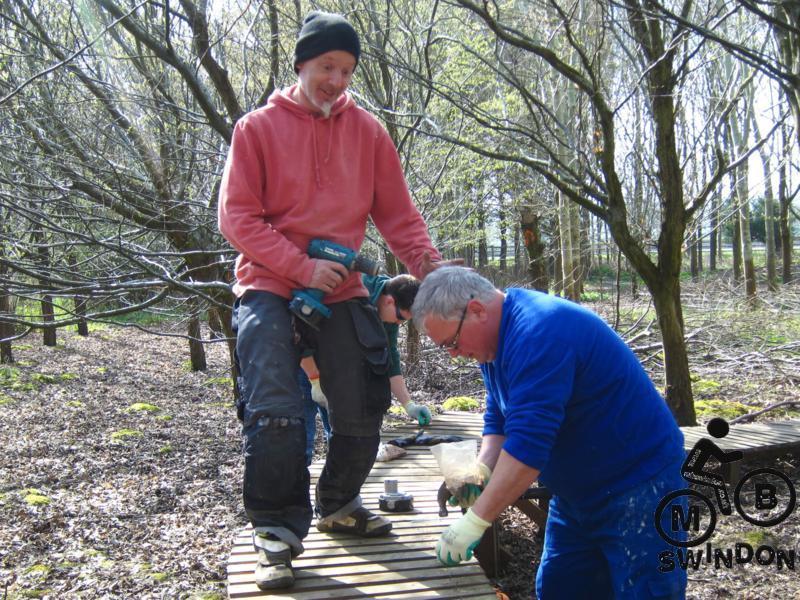 After months of rain and cold it was pleasant to be out on an early spring morning. Small patches of green were appearing on trees and the birds were tweeting (they haven’t mastered hashtags yet though).

Pothole filling kept the group occupied for most of the afternoon. It was very satisfying to see a damaged patch of trail be turned back into something robust.

In general we’ve been very pleased with how well the trail has stood up to a very wet winter.

Thanks to everyone who came along and helped keep the trail in good shape. Future build days will be advertised on the events calendar.

The original triangle was closed in late 2010 (see the plans from August 2010).  The first attempt at marking a simplified route was done in Sept 2010. The bulk of the work was done during 2011. It carried on into 2012 with it opened ready for the April open day.

The entrance and exit lines had been scouted in May 2010. The entrance link was marked out in Aug 2010. The logs were moved in Nov 2010. The triangle entrance was cleared in 18th and 28th of Dec 2010. The 2011 build history covers the triangle activity.  The 2012 work consisted of more surfacing on the 14th and 15th of Jan. More material was moved on the 4th ready for the 5th  of Feb. The final connecting berm was built on the 4th March and a few minor details finished on the 24th March.

The wood section was mainly built in 2011…it’s just taken a while to finish it properly.

The alley history is covered in this update from  May 2012. It was further patched up in April 2013