The Croft Trail has existed in Swindon since mid 2008 (see the history).  Over the years the route has been adjusted and new features built. A dedicated group of volunteers have worked in their spare time to create the trail as it is today. All of this has been recorded in the  trail build diary.

A guiding principle has been to make the most of the limited space and elevation that’s available. This has involved many hours of discussion over the years, countless diagrams, test digs, trial runs and rebuilding of parts that didn’t work. The end result has been a trail that’s received positive feedback from many riders.

When the club took over the trail development some basics were already in place. The start and finish points already existed and an evolutionary design process was used. Recently a radical question was posed to the committee: would the trail actually make more sense if it was ridden in the opposite direction?  The inspiration was a cyclocross rider who was found riding the wrong way round and said “I’ve always done it this way!”.

Some members thought it was worth investigating the idea. Others were dead against it for various reasons. In the end  the whole committee assembled in the early hours  on a Sunday morning and rode the trail in reverse by torch light. After three laps votes were collected. By a very narrow margin the vote was a yes. 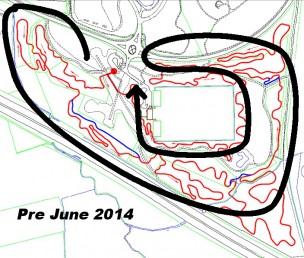 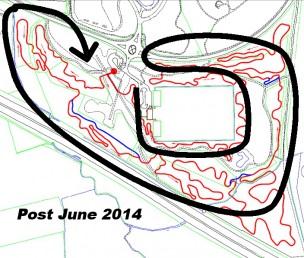 Club chairman Phil Mayger is very excited about the possibilities “it actually works a lot better this way round.  Some things come up a lot sooner  such as the bit near the end (start) round the pond. The triangle is still in the middle of the lap and the bits near the start (end) now happen later. The woodwork at the end (start) is still one of my favourite features and the berm just after (before) it flows a lot better.”

Surprisingly many of the jumps work well as step ups and can be left alone. Two are going to be moved from the climbs (descents) onto the new descents (climbs). Pete’s steps, long a source of frustration to riders, will now be a fun descent. 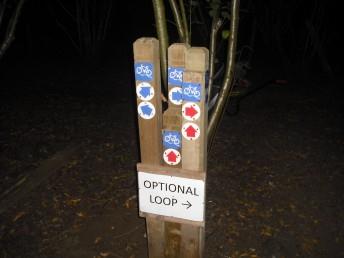 “We discussed our ideas with one of the guys from Architrail and he said that we’ll get more life out of the trail since the gravel actually beds in directionally with use.”

The camp fire will now be at the end of the laps on Friday nights rather than the start.

A small oversight was made regarding the notice board, but, as Phil says “no one ever reads it anyway and this way round then can look at the map of where they’ve been rather than where they’re going.”

A benefit of the change is that all existing Strava segments will be voided. Since the trail has changed many times over the years many of the existing times are for old layouts which might have been shorter and easier.

Technically the only work required at the trail is to swap the arrows on the sign posts around. This is going to be done overnight on the longest day of the year, Saturday June 21st.

So be prepared to be a bit confused with the new look trail after the swap date.  It really will be like visiting a new trail centre. Hopefully riders will appreciate the new look.