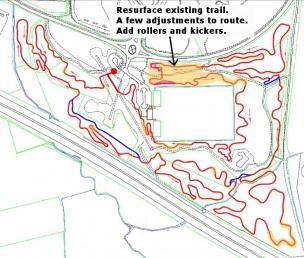 Our plans for the weekend were to repair the section on the north side plus topping up various areas of trail that either had pot holes or had suffered over the wettest summer in 100 years. The section on the north side was one of the oldest remaining areas, having been surfaced in early 2008 before we took over the trail. The area after the crossing was out first piece of trail, back in October 2008 and was surfaced in February and March 2009.

We’d already had 20 tonnes of material delivered on the previous day. This was our first trial with using 100mm down rocks as well as the type 1 limestone.

Brandon hire arrived at 9am with the power barrow, compactor and two new wheelbarrows. A few minutes later than the first few volunteers had arrived and were raring to go. This set the scene for the day: a brilliant turn out of keen workers and a lot of new faces.

We immediately got started on fixing up the trail on the north side just after the crossing. The rocks went straight into the puddles and clearly worked in terms of giving a solid base for the trail. This patch was originally surfaced on the 2nd of March 2009 (no build diary entry yet).

The route was adjusted slightly to remove the temptation for taking a short cut. Nothing is more annoying to trail builders than seeing a short cut developing. The thought is always “why not take the ultimate short cut of staying at home”?

As soon as Rafe arrived with his Land Rover then we were able to start a second team loading up sacks and delivering them to the triangle area.

Material was arriving more quickly than we could use it at the north side. A third team started filling in pot holes along the rest of the section.

It was a case of looking for enough work to keep up with supply, so another job was tackled. A section of trail that had been missed out when we were resurfacing back in March was quickly filled in. This had originally been built back in November 2008!

Another set of potholes was fixed, this time on an area that had never been surfaced. With more reasonable weather and lower traffic levels then we’d found that non-surfaced sections under pine trees were fine. Not so over the summer of 2012. This area had been build in Oct 2009.

Whilst this was happening then material in the triangle was being tipped onto the trail to raise the trail level by a few inches. The endless rain of 2012 had shown up a few weak areas and it was great to fix these. This area had first been surfaced in January.

The pot holes on an old section called the roller coaster were fixed plus a section that had become muddy after a lot of rain was filled in with more material. The roller coaster had been built and surfaced way back in February and April 2009 (not uploaded to diary yet) and the following section on the East side was just under a year old.

Meanwhile the last of the rocks and chippings were moved from the car park and stock piled near the crossing on the north side. Kat did some litter picking too.

By 3:45pm then all 20 tonnes of material had been shifted!

Facebook/Twitter updates from the day

11:11: Amazing! We almost can’t cope with the rate of gravel delivery.

12:31: It’s looking alright. 4 or 5 Land Rover loads of bags to the triangle. North side after the crossing filled in and new bit done. Pot holes filled. Just filling in the short section after the two berms by the tennis court. Hopefully we can start on the big bog and triangle filling soon.

18:08 All finished for the day. Thanks to everyone who came along! Loads done today.

Those present…(apologies if anyone is missed):