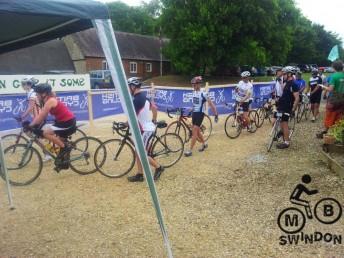 Since I’d wanted to do the 80 mile off road route route at the Elan Valley Challenge I thought that 90 miles on road would be reasonably easy. Even the night before the event I was in two minds about doing this though. My other option was to meet up in the Forest of Dean and do a fairly relaxed ride around the trails there.

I prepared my kit, went to bed at 01:45am and set the alarm for 6:15am. I reasoned that if I got out of bed in the morning then I wanted to do the Sizzler. If I reset the alarm for 9am then it would mean a trip to the Forest.

At 6:25am I got out of bed in the mood for some Sizzler action. Part of the appeal was to prove that I could do it. I also liked the simplicity of just concentrating on keeping moving on a waymarked route with no real technical challenge. Just me, my fitness and the road. I also hoped I could be faster than at least one road rider out there.

I took my full suspension Specialized Camber with 26″ wheels, locked out the rear suspension and pumped the 2.2 tyres up to 50psi (I normally run between 25 and 35 psi). I had been offered some slick tyres but opted to leave them behind. 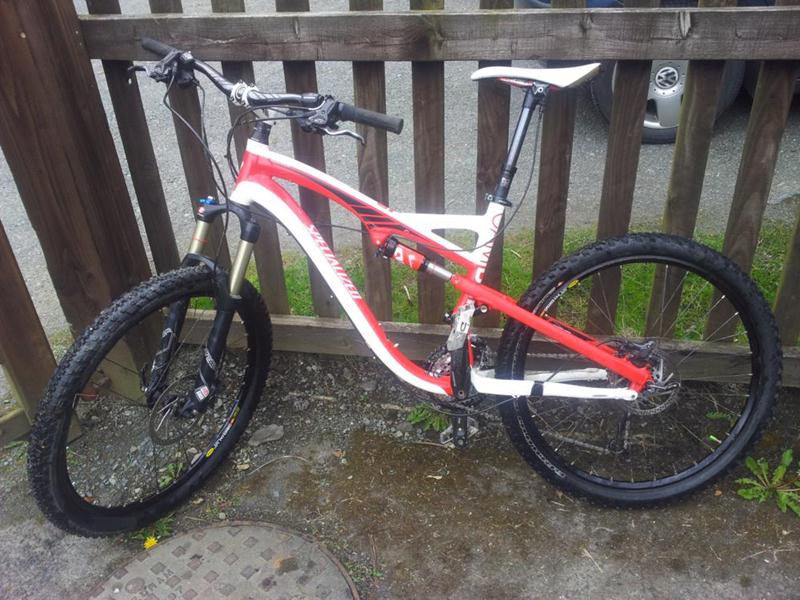 The event opened at 7:30am but I didn’t make it on site until 8am and then did some special pre-ride faffing. The guys in the car next to me looked at my bike, heard that I was aiming for the 90 mile option and said “good luck, you won’t be back before 7pm”. Also spotted in the car park with their road bikes were Matthew Kerry and Debbie Davies, both MBSwindon club members. I found out later on Facebook that Hazel Ross and Helen RA Rabello were also at the event. Hazel completed the whole route of around 90 miles by 2:10 (6.5 hours, 14mph average).

It was another brilliant summer’s morning as I set out with my free 9 bars safely in the bag. The bike felt light and I really didn’t seem to be having to work hard. This was good since the lane had a lot of small hills. I passed my first roadies. Mind you they were stopped and fixing a puncture.  Not long later a few overtook me properly.

I had the upper hand on the optional avenue route through the Savernake forest (there are mtb trails, see Bertie Maffoon ride).   The track gave me a proper win over a roadie plus one who punctured. This wasn’t a battle or anything! We met up at the end though since a lack of any signpost gave us a map reading or gambling challenge. The map wasn’t detailed enough for proper map reading and the signs had been a bit small and scant. Signs can go missing too.  My choice to turn right and meet back up with the proper route paid off. 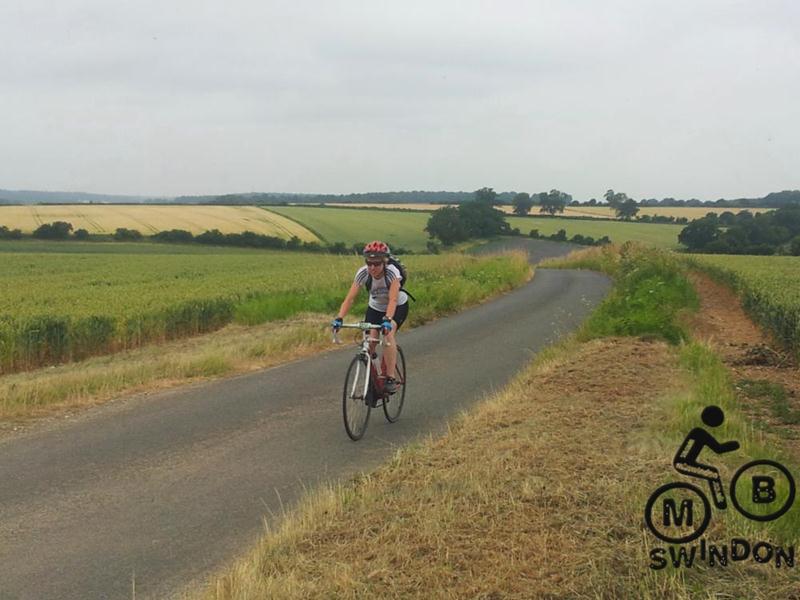 Riding the lanes through the countryside in the early morning was as much fun as mountain biking. It was high speed, low effort mountain biking.  I discovered that road bikes were a lot faster at rolling along and down things. When the speeds slow down on steep hills then I could hold my own on the mountain bike. Everyone assumed that the mountain bike was harder to ride so I received much kudos for attempting it.

I was caught by a very nice woman on a road bike on the big descent towards Ramsbury. I remembered the benefits of slip streaming as I pulled in behind my cycling companion. Hmm, a lot of nice women seem to ride road bikes. I was quite warming to the idea.

I’d say that this section was the best for me on the route. Speeds picked up and I found myself part of a big group of riders. It really didn’t seem to be taking a lot of effort to keep the bike moving. I felt fit. One rider said to me “the only place we can have to you is on the downhills”. So I proved that one quite fit mountain biker is a bit faster than a slowish road rider. 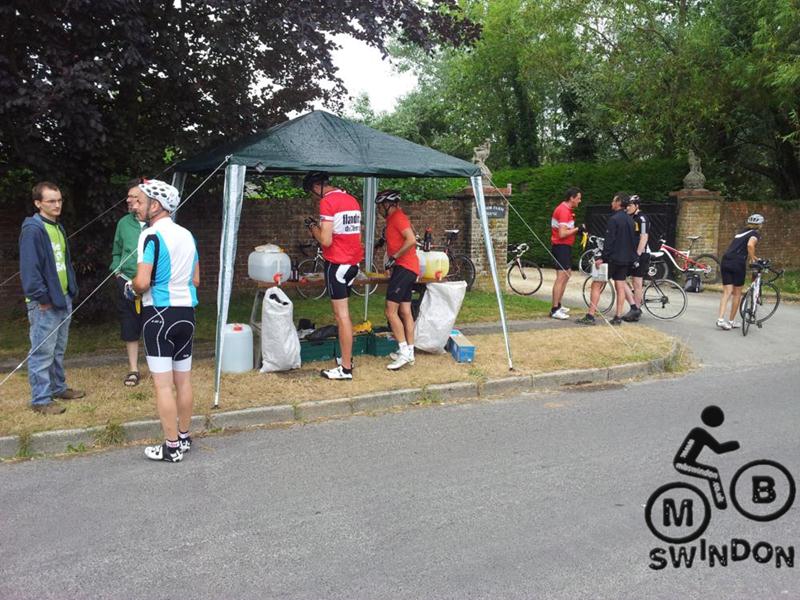 It was a positive feeling to have the first loop finished as I arrived at the food stop. The route was arranged as three loops, each of about 30 miles with the food stop as the common point in the middle. I heard that a few groups had gone out from the food stop, followed the signs and then turned back up at the food stop ten minutes later. I rode off, followed the signs to the top of a hill and then found another sign which I followed….back to the foodstop. I wasn’t too happy really but I saw the funny side quite quickly. It cost me ten minutes at most.

It’s fair to say that this was something of a navigational challenge. The map didn’t have a massive amount of detail and the sign posts were small and easy to miss. These two limitations had be to be balanced with a mixture of judgement, guesswork and plain old luck. In this case a bit of trial and effort was added to the mix. We saw a lot of riders coming towards us and assumed that they were following some sort of return loop. But they weren’t! Everyone agreed that the route was great though.

The second loop had a steep climb up to Martinsell (as used on the Bertie Maffoon ride and the Wansdyke epic) , followed the road towards Marlborough and then spent a long time climbing up to the Wansdyke. The road had a lot less trees and the day was hotting up. So the level of exertion went up. 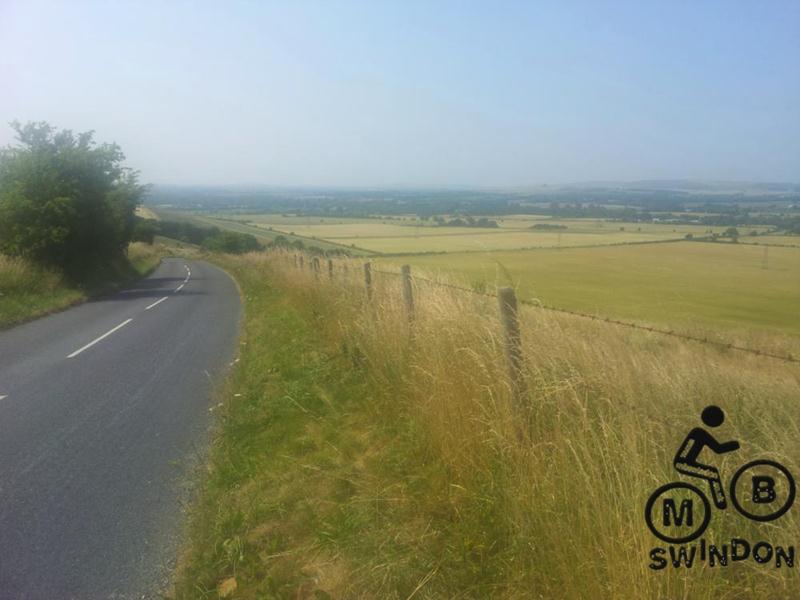 I was using Shimano MTB shoes on studded flat pedals. I found that at various times I would get a numb foot or a hot foot. I assume that the flex in the shoe was heating my feet. I had to move around a bit to keep it at bay. More concerning was the numbness in my glutes aka arse cheeks. I assume that the thin shorts and knackered saddle were to blame for the onset of deep vein thrombosis. I had to stand up from time to time to deal with it. On the plus side I didn’t have any back ache.

I discovered the downside of road riding: morons in cars. About one in ten drivers are mentally challenged with the idea of driving around a bike rather than over it or as close as possible. The problem is that you don’t know if any vehicle is part of the ten percent so you have to assume that they are. Every sight or sound of an approaching vehicle leads to a tensing up in preparation and then, when they do go past, the noise is quite aggravating and then a load of fumes from a knackered camper van or some badly tuned motorbike spoil the occasion a bit. Fair play, the majority of drivers were fine. 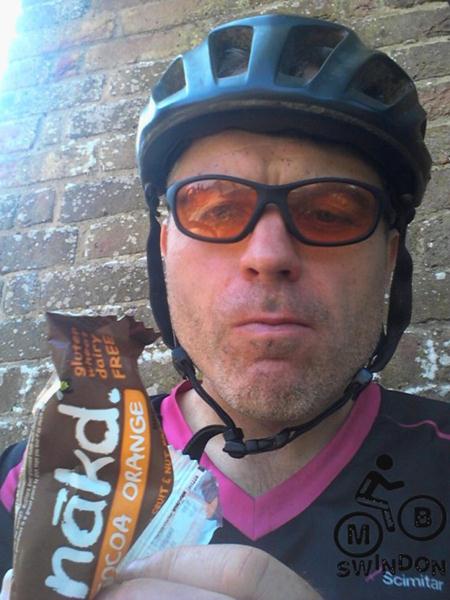 Continuing in a negative outlook, the return part of the loop seemed to go up the whole way and the wind was blowing quite hard and giving me ear ache. I lost track of the sign posts too and when I found one I couldn’t work out if it meant to turn left onto the road or to turn right and then follow it round to the left. So I guessed for a bit and eventually found some more signs. The road should be flat to Pewsey right? Wrong. We weren’t going to Pewsey…we were going back up to Martinsell. I’d recced this bit now so I knew where I was going.

The second trip to the food stop was very, very welcome.  I had done 100km aka 2/3 of the distance at an average of around 18 km/h (including the stops). All I had to do was load up with flap jacks and water and then nail the last 30 miles which should take about three hours.

Some riders who I’d seen earlier arrived a the food stop and one of them had lost his keys  so they were going to ride the route again and look for them.  Codeword “keyman”.

Taking a guess on where the route went I rode off until I found some arrows. I must have gone off route quite soon after that. Or maybe not. I’d started to realise that the route on the map didn’t necessarily represent the route that was marked out. I’ll never be sure. Either way, knowing roughly where it went meant that I picked up the trail at Pewsey. This lead to the southern most point via  a very big hill. It wasn’t actually that bad to ride up. More annoying was to find that the land undulated at the top.

I came out onto a major road and passed a turning thinking “that looks like the sort of place that the route would go”. A few miles later I stopped to rest my glutes, looked at the map and realised that the route possibly did go down there. By this time I was well versed in splitting the difference between the map and the signs so carried on to Upavon where I found a sign post that looked just right for where I’d come from. 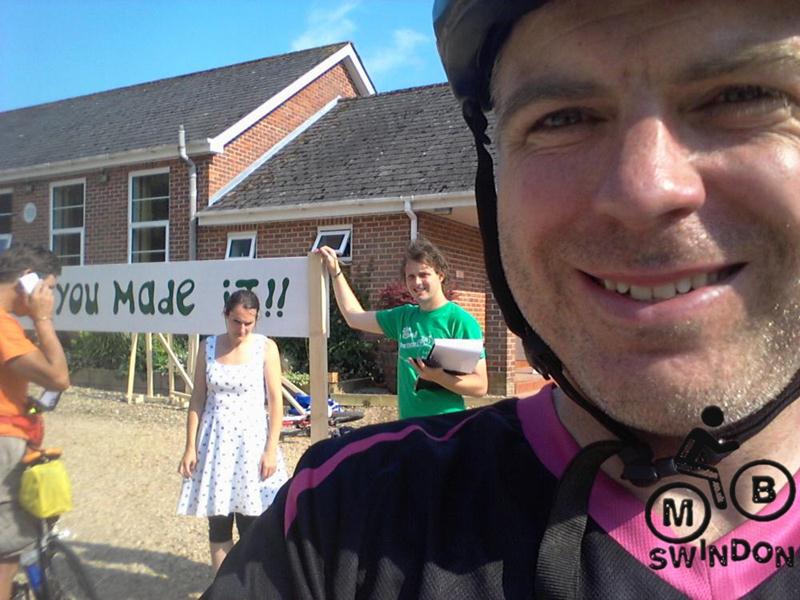 With 125km on the Garmin I reckoned that another hour of riding at about 20km/h would take me to 145km aka 90 miles. Once again the road seemed to up all the way and the wind was in my face. I arrived at the road junction near the finish with 130km (80 miles)  showing on the Garmin. I wasn’t happy with this: the target was 90 miles. So I turned the other way with a plan to add some extra miles via the lanes. I rode up the point that had sent me back to the food stop earlier. I did the triangle of lanes twice and then did some maths. This showed that riding back to the event finish would be 1 km short on total distance. So I rode up and down the lane and then back to the finish. That still wasn’t quite enough so I rode the lane back and forth. I arrived at the finish an hour after my first arrival with 145.1km showing. 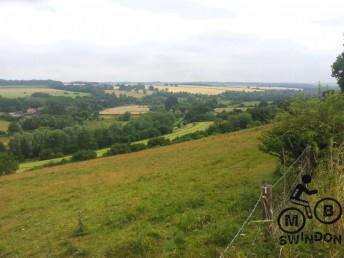 There were about 5 cars left in the car park at this time. I don’t know if everyone else did 80 miles or whether I’d missed some distance out somewhere. I need to see the log for another rider to be sure.

I was really chuffed to have the 90 mile target completed. My average moving speed was 21km/h (13mph). Considering how hilly the route was then I was quite pleased with that. I’d love to find out how much quicker I’d have been on a road bike.

There was still food and drink available in the hall so  I had a few cups of tea and stuffed my face with falafels. I got talking to the organisers. They were well aware of the signposting and map issues and had big plans to sort it for future events. Every rider made it back and they had good records of who was out.

Overall a great fun day out. The route made great use of the countryside and the event had a charm to it courtesy of the organisers.