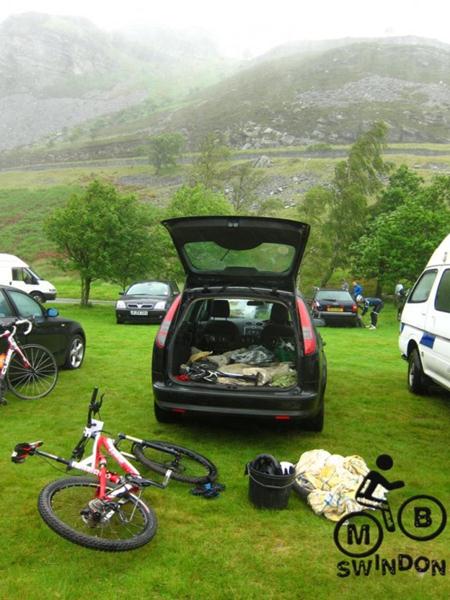 The Red Kite Events Elan Valley Challenge offered several on and off road routes plus a running  event. I’d already been to the Devil’s MTB in April 2013.  I had intended to the do the monster 130km off-road route (85miles) and had spent a week resting and psyching myself up for it. I reckoned that 10 hours at 8mph would do it so if I started at 8am I would finish at 6pm. The plan was to pace myself and just keep moving. I had a sadistic fascination with finding out how painful it might be.

This was my third trip to the Elan valley  in five weeks (following from Mountain Yoga breaks and the “A Cycling weekend tour”) and the fourth if you include the Easter Trans-Cambrian ride. Neil from Red Kite Events had shown us around on the 2012 Jubilee bank holiday weekend too! So it’s fair to say that I’ve got to know the area pretty well.

The weather was looking promising on Saturday evening. It stayed light until 10pm due to it being very close to the longest day of the year. The weather forecast was for two showers which didn’t sound too bad.

At 6am on Sunday morning the ground was wet and clouds were overhead. Rain fell as I drove up from Llanwrtyd to Rhayader.  When I arrived at the Elan Valley visitor centre I found a proper Welsh rainy day situation.  Two showers – both six hours long. That was my expectation.

Two guys in the van next to my car saw my MBSwindon shirt and said “we’re from Swindon!”. They’d camped there overnight.

I ran from the car to the centre to register. Inside the organisers were considering their options. The overnight rain was causing concern in the Doethie Valley regarding rescue vehicles (the valley is a classic ride). It was annoying because the ground  had been rock hard over the previous days.  Finally a decision was made: the long route was not happening. Looking out of the window at the rain lashing the building I can’t say I was too sorry. 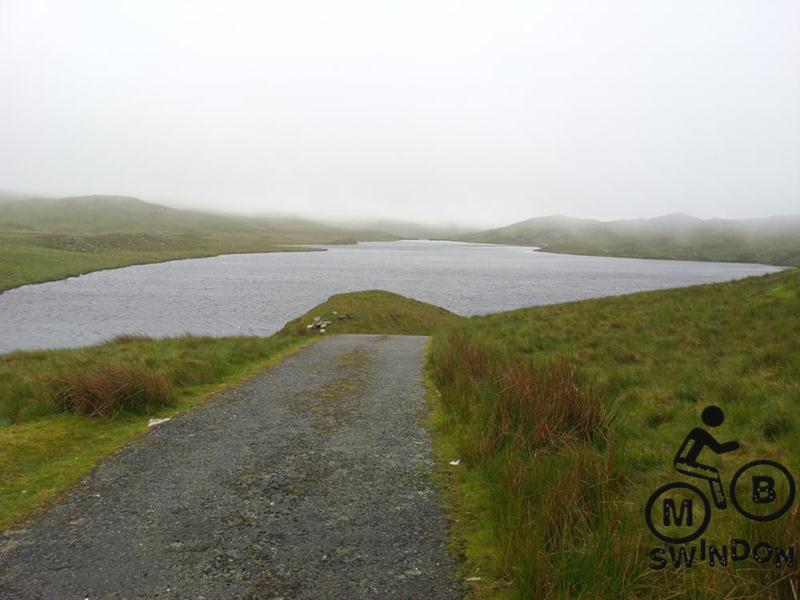 I knew from past experience that once I was moving then the rain wouldn’t seem so wet. I took a quick look at the route map,  got onto the bike and started pedalling. I knew that the route headed up to the Claerwen reservoir so followed the road up there. At the end of the event I realised that I’d been too hasty, ridden past the first sign and  missed a section out. Oh well, I’d already done the missing bit on the Mountain Yoga Breaks weekend. That saved me a bit of effort but also some of the fun.

I’m not a particular fan of the long track along the side of the reservoir and with rain and a strong headwind I knew  I just had to grind away and keep moving. The bike seemed to be moving along well enough. The noise of the wind was quite annoying and it was a relief at various points to be sheltered by the rocks and have some quiet. At one of the river crossings I discovered that the water was warmer than my feet. 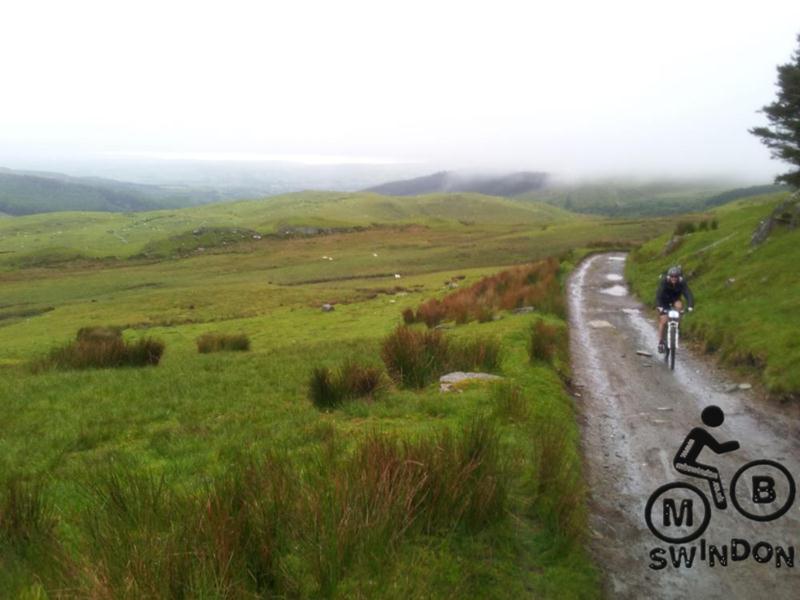 Two hours into the ride I started on the first big descent. This dropped down in Strata Florida, the most Westerly point of the ride. The rain had eased off a bit and it was a relief to be out of the headwind. I knew that I would soon be turning and faced the interest of some new trails. The monster climb up from Strata followed an interesting, rocky track and took me past some Land Rover enthusiasts who shouted encouragement. 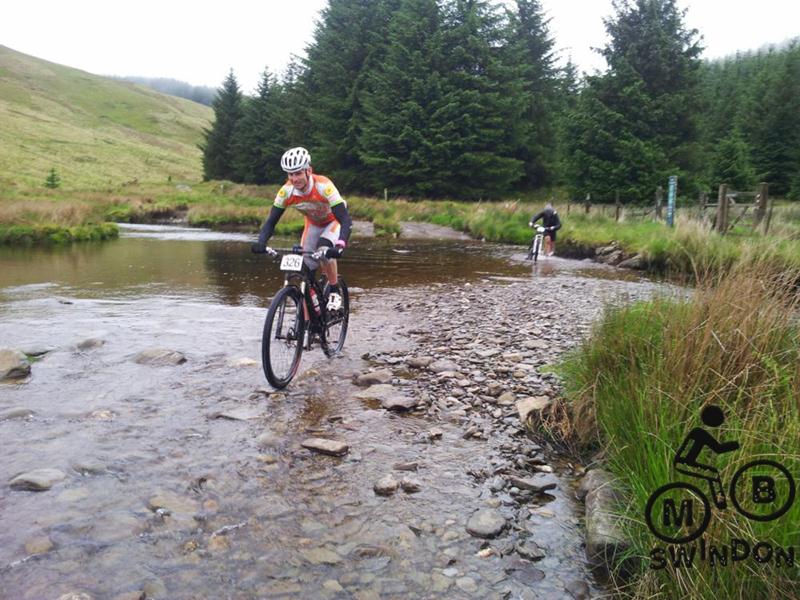 When I stopped at the top of the hill to take a photo of the view  two riders caught up with me. The Red Kite blog post reports that 8 riders had passed this point by midday and I think I was number 3 out of that group.

We had a great three way race down the bridleway through a series of deep puddles and fords. They took a dry walk round one massive puddle and I overtook them by running straight through it. It was knee deep but I was soaked below the middle anyway. The air temperature wasn’t too bad, all things considered. I’d almost call it warm.

Without a doubt, the ongoing series of river crossings and rocky obstacles was the best part of the ride. I think it had stopped raining, I was warm, route choice was interesting and we were having a good mini race. I was keeping an eye out for sharp rocks as I’d wrecked a new tyre on the previous trip in the area. One of the other guys ripped a hole in his tyre so we stopped to fix it. Another rider went past us at this point.

There was a food stop at the bottom of the Devil’s staircase. The staircase is a well known steep road climb. After a fast track descent the other side it was time for big slog up onto Drygarn.

I was suffering my regular lower back pain at this point and cursing being caught by yet another rider as we exited from the woods onto the open hillside. Still, I had four people in sight as I started out on the boggy, tumpy grass. I noticed that a rider ahead of me who was pushing had caught another who was cycling. I took the message on board and started walking myself. This was definitely the fastest method of moving on the terrain. The wheels would just sink too hard into the soft grass when riding.

Despite the conditions I was really enjoying this. I actually felt quite sprightly considering that we’d covered a fair amount of ground already. Things really weren’t as bad as you might expect, all things considered. 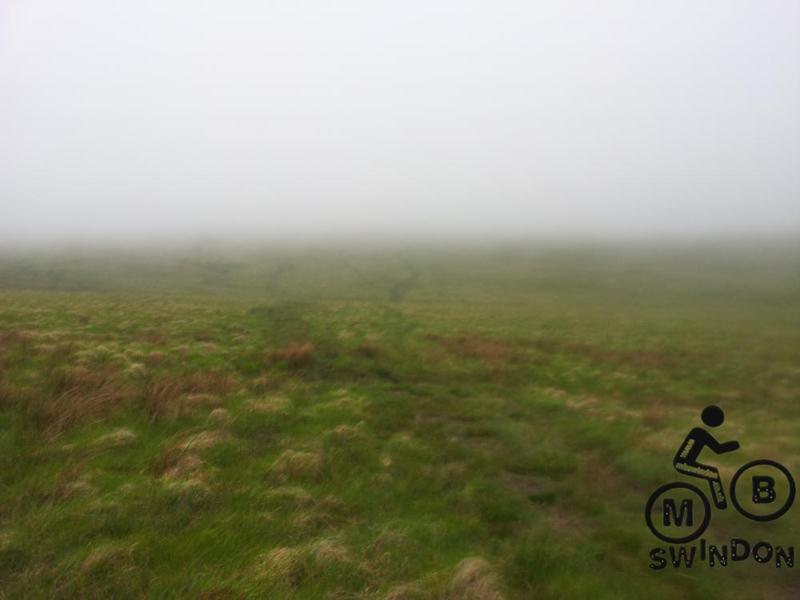 I caught the “rider in black” at the beehive rocks on the top of the hill. It has been pointed out that the beehive looks like a big nipple on the breast shaped hill.  He passed me on the descent and then gained a load more time when I crashed. I’d taken a slight diversion round  a rock and my front wheel had located a perfect wheel shaped hole in the boggy peat. I had a slow motion moment before being thrown over the front of the bike and landing hard on my thigh on a rock. I lay on the ground for a few seconds to assess the pain. When I got up the back ache had completely gone and my slightly numb thigh actually felt quite nicely anaesthetised. 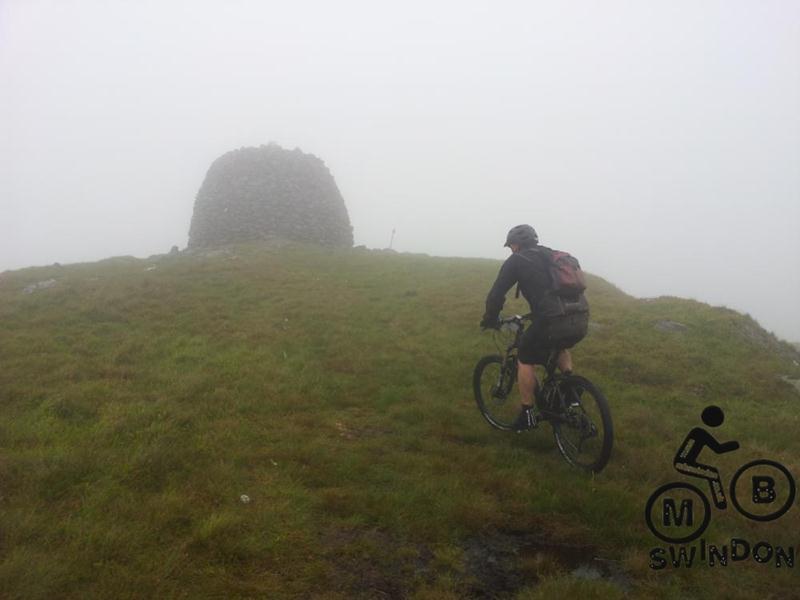 After a good while riding on the boggy peat the mist cleared slightly and suddenly there was a view of the Elan valley. I’d often wondered about the route from the Drygarn into the valley so it was good to finally ride it.  I caught back up with the rider in front when he stopped for some food. Two faster riders appeared out of nowhere and then disappeared down the hill in front of me. Why are some riders so fast?

So, after my cheating start I’d been caught by four or five riders. I was feeling good though and had hardly eaten the big stash of energy bars I had on board. The fastest descent of the day (34mph) was on the farm track at the bottom of the hill just before rejoining the road that I’d started out on.

I knew what was coming next – a ride up the road and then the steep climb up onto the radio mast hill. I stopped to eat and waved goodbye to the rider in black who I’d chased all the way from the previous food stop. As I chomped on energy bars my final companion for the ride appeared. We had a bit of a chat as we rode the last climb.  The descent to the chapel is definitely better in the dry. 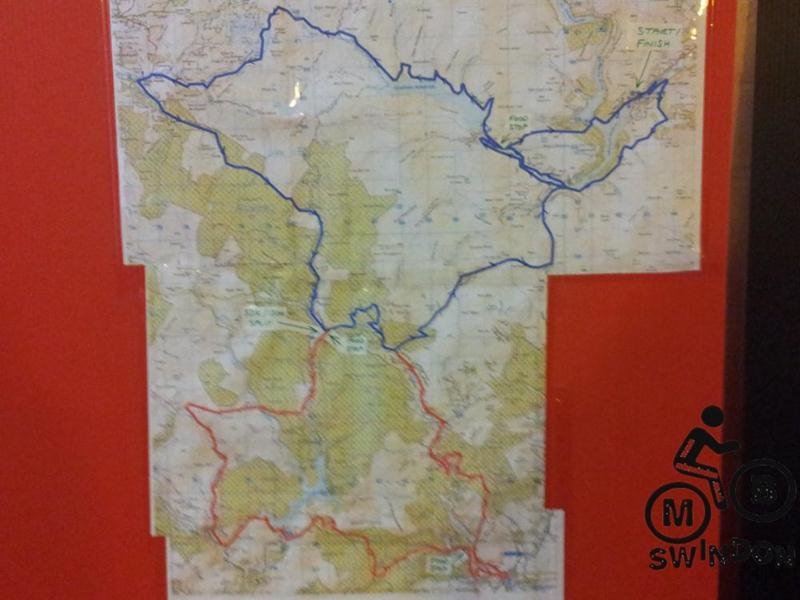 At the bottom the route split and I was quite pleased that the long option turned right and back down the road to the visitor centre. We both agreed that we’d probably had enough for the day.

Overall a great day out in wild Wales. I’m definitely up for doing the 130km option if it’s ever dry. 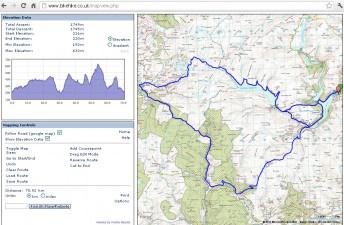 The missing bit from the start is shown on this route (OS Map, GPX) from the Mountain Yoga Breaks weekend. My Garmin computer box said 71km/44miles in 6 h 31m (5h 42m moving). That’s 11km/h and 12.6km/h respectively.  In terms of elevation:

See also the Red Kite report from a medic’s point of view and on the 29gears blog.