This was a riding trip based around Llanwrtyd Wells in mid wales. It was held over the royal jubilee double bank holiday.

Taking this route meant that we had to ride a few sections twice which seemed to work quite well. We made a serious attempt at the steep climb near Coed Trawllym, doing it in sections and climbing all of it except about 10m. The view from the top was worth the effort. Sadly, one of the best bits of the trail had been bulldozed out of the way for a new track junction.

We called in at the Cafe for some welsh rarebit and tea.The route then took in more classic ale wobble action: up the track to the farm and then the rock slab climb onto the top of the hill. A bit of a road section before the final, long fire road climb back to the bottom of the lava flow. We rode up a fair bit of that too.

Things were finished off with a bit of a blast down the track that we’d climbed in the morning, a short climb up another steep slope and then a fun descen back into the Irfon valley.

We stayed at the Neudd Arms hotel, though the Drover’s Rest is also worth consideration.

There were concerns that the weather was going to turn on Tuesday. It was a bit drizzly but looked quite promising. We joined Neil from Red Kite Events who took us on a classic route in the Elan Valley. 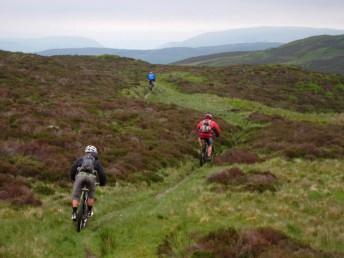 Our previous attempt at riding there in 2010 was turned into a Nant Y Arian ride due to heavy rain and poor visibility.

We opted to start with a climb, so parked on the outskirts of Rhayader. A light drizzle was falling as we started on the long road climb. This went on a for a while but wasn’t too steep. Eventually we turned off the road and onto a narrow path that continued to higher ground. As we reached the top then the climb turned into a traverse on bouncy grass. As we worked our way round the mountain some great views came into play.

The only way from here had to be down.The downhill consisted of a series of rock steps, about twice the size of a cattle grid and between them a sloping, grassy track. This meant that speed could be maintained at all times and the rock drops were an ideal size for airtime. Neil had told us that it was good.

After reaching ground level then the only way was up. We like steep climbs but this one broke us. Steep with a narrow line between grassy tumps that meant catching the pedals and it went on for a long time.

The second descent was looming. We started with a step drop over a river, a small climb and then the big down. This had some really fun angled rocky steps at the top. We had a good look at the funnel rock at the top. This looked pretty intimidating and in light of the drizzle that was falling we opted the easy way down. The view onto the reservoir was impressive. Even after the big rock the trail was steep and tricky. 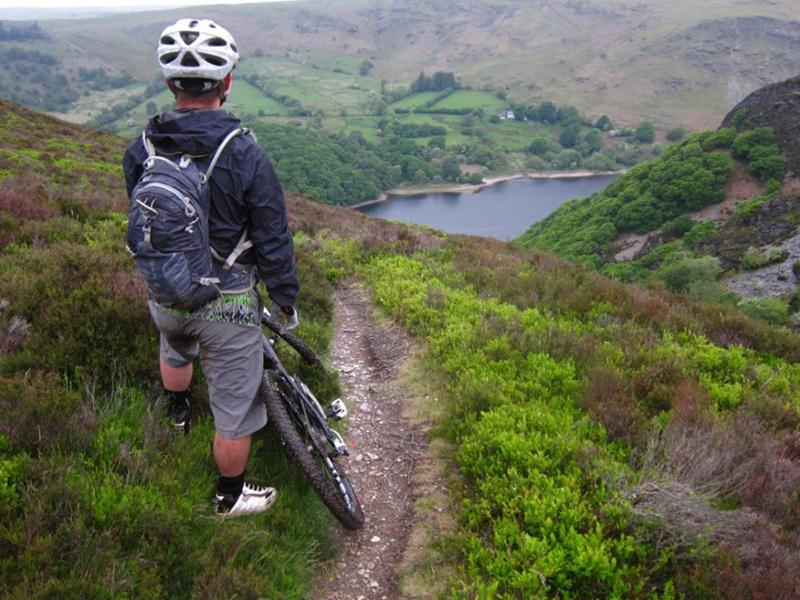 At this point we were offered the chance of a short cut back to the start. We opted to keep going. A long and gradual climb took us up past two reservoirs before rising up to higher ground. As fans of steep climbs we weren’t dissapointed. This bridleway followed the top of the hills before eventually bringing us out back at the top of our first climb. 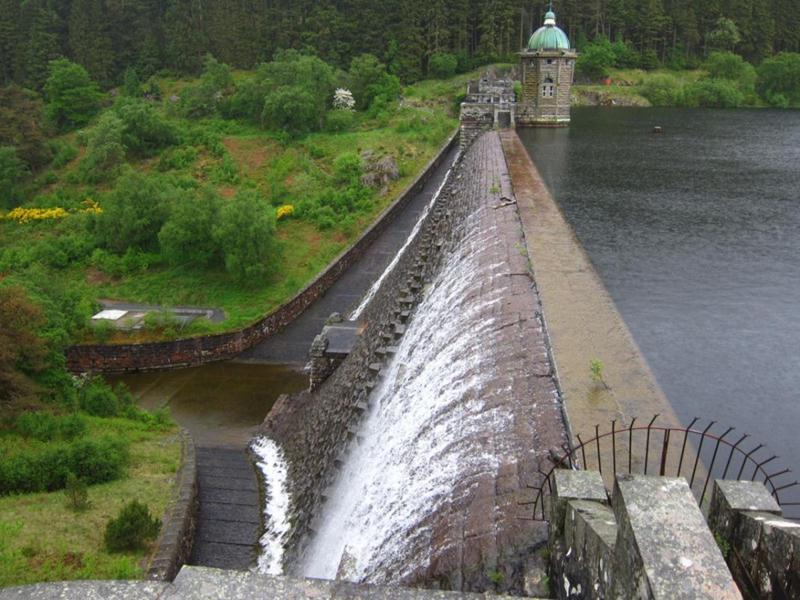 We knew that the only way back to the cars was down. Neil told us that this was the best descent of the three. He was right. This was another track with rock steps at regular intervals, all of which could be taken with decent speed. An ideal high speed descent. There’s a slight advantage to knowing the track because all of the rocks could be taken at full speed.

From the bottom it was a short trip back along the road to the cars.Thanks to Neil from Red Kite Events for showing us this route.