A Cycling offer guiding and coaching as well as running a race team sponsored by Pivot Cycles. It was set up by endurance racer Matt Page with his wife Nia. Matt recently set the record for the Welsh coast to coast challenge (c2c) covering the 210 miles in 18 hours and 41 minutes. There’s between 7,000 and 11,000m of ascent too! To put that into perspective, a typical rider would consider 1,500m of ascent over several hours and maybe 45 miles to be a hard day out.

You might assume that a guided ride with an endurance racer would be a painful experience. Images might come to mind of a haggard group of weekend riders  begging the racer to slow down as their energy levels fade before abandoning their bikes from exhaustion. Fear not. Matt is a qualified guide and understands the requirements of leading regular riders round unfamiliar trails. Racers don’t spend all of their training time riding as fast as possible – they also put a lot of steady miles in.

For this trip Matt had invented a route that crossed the Cambrian mountains from the east to the west on the Saturday and a slightly different route back again on the Sunday.  The distance was around 65km (40 miles) per day.  Friday night was spent at the Brynafon Hotel in Rhayader and Saturday was spent at the Hafod Hotel at Devil’s Bridge. Both of these offer comfortable accommodation that is well suited to cyclists.  The package covered two days of guided rides, accommodation, breakfast, evening meal and a daily lunch stop courtesy of Nia in the support vehicle. Also included were Torq energy product samples, luggage transportation, bike wash and bike storage. This was my third ride in the Elan valley since March (see the Trans Cambrian Ride and the yoga MTB weekend) as well as a day trip there almost a year previously with Red Kite Events. In that time I’d been introduced to pretty much every part of the area so I was looking forwards to seeing what Matt had in mind for us. 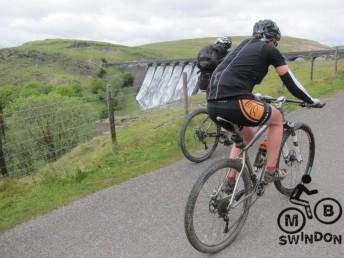 He’s started by booking some great weather for us. It was sunny on Friday evening and the forecast was for that to continue over the weekend. Our group set off at around 10am on the Saturday morning and quickly passed through Rhayader and along the road towards the Elan reservoirs. We soon peeled off onto a narrow lane and then up into the mountains. The joining instructions recommended bringing a spare tyre due to sharp rocks. I destroyed a one week old tyre at the base of the first climb, catching the tyre on a sharp edge and ripping a hole in it. We patched this up with a Park Tools tyre patch that Matt had. It had a bit of a bulge but would probably keep things together until the lunch stop.

A steep walk and then some rolling took us to one of the most famous descents in the Elan valley: the Chute. This is a short and steep set of rock steps. This had looked very unappealing on my first visit – peering through the mist and drizzle the steep and jagged rocks were deemed “insane” and we had walked down past them. On a sunny day they looked a lot more inviting. After watching Matt ride down it I set myself the challenge of riding it in two parts with a bit of a rest in the middle. This was a success and I left it at that, knowing that we had a long day ahead. 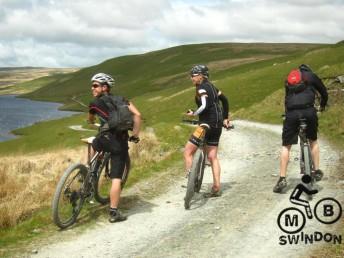 Matt acknowledged that we’d done the most tricky option at the start of the ride. One of our party, Matt Kerry, later told me that he wondered what the rest of the route was going to be like after experiencing this.

The route then  followed the Trans Cambrian Way up past the Claerwen reservoir.  The track follows a series of incursions up the valleys on the side  of the reservoir where we all commented on the major contrast between riding into the cold wind and then turning slightly and feeling the heat of the sun.  Beyond the end of the reservoir and the route dived off down to Strata Florida for the lunch stop.

After years of riding I associate lunch with sitting on my rucksack whilst I eat the remains of a squashed sandwich, some blackened bananas and then reassemble the parts of a cracked bar of chocolate. Not so with the A Cycling method. Nia had set up the van and awning. Chairs were laid out next to a table of paste, quiche, bread, cheese, juices, tea, coffee and several cakes. This kept us occupied for a while. The afternoon route climbed back up onto the Trans Cambrian Way, followed this north for a while and finished off with some lanes and a short section of bridleway. There were a few boggy sections one of which caused Hanneke to sink up to the hubs. This kept us amused. We arrived at Devil’s Bridge for around 5pm in time for more cake. 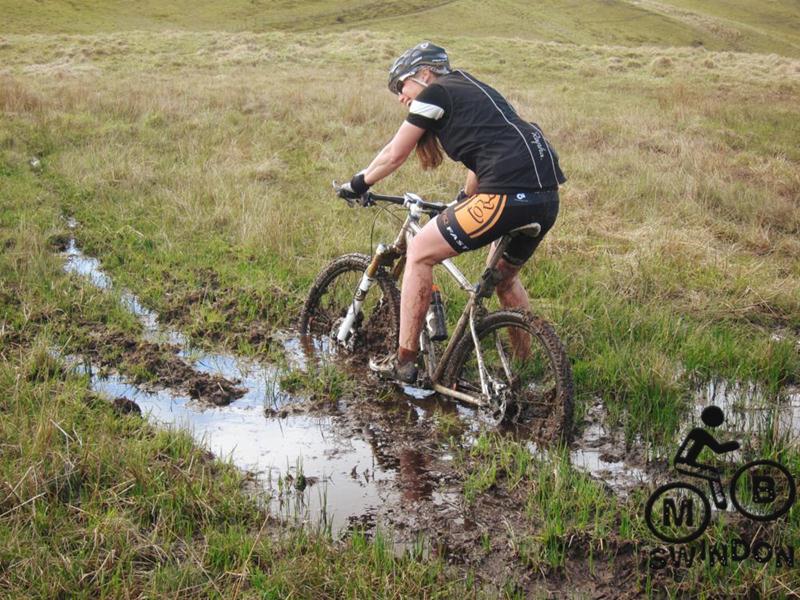 We visited the Devil’s Bridge falls before our evening meal. I’m usually quite cynical about tourist attractions since a lot of them are not worth the time. In the evening sun and with no one else around the steep path through the woods around the falls was a very pleasant surprise. The path takes in a lot of very steep steps and there’s a continuous air of mystery as to where it’s going to go next.  On top of that there’s something compelling about the sight and sound of  a stream of cool water cascading down a very steep valley. The bridge itself has three versions built on top of each other. 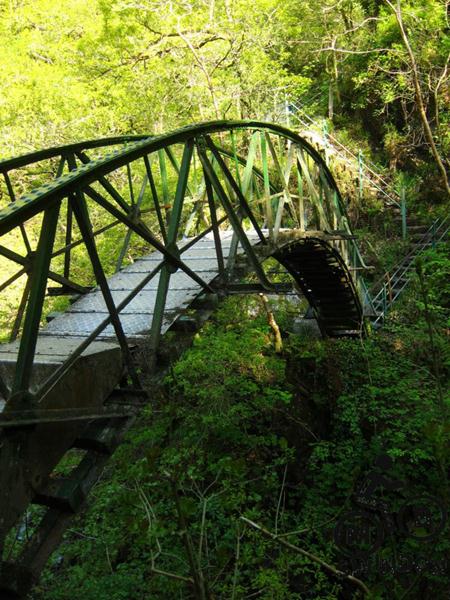 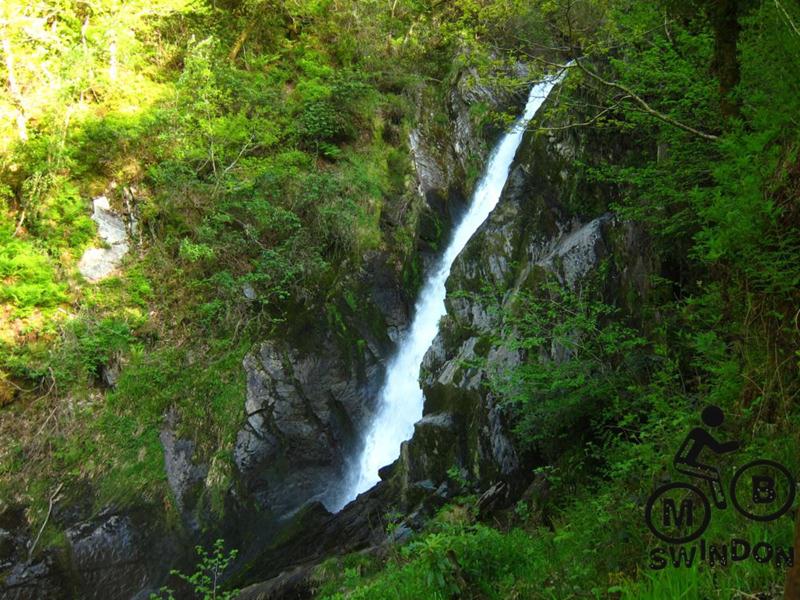 After a sleep with the sound of the falls in the background  Sunday dawned as another bright and sunny day.

After a big breakfast and loading up with cake we set off at around 9:30am. We followed a  slightly alternative route, past the Hafod estate arch,  descending steeply through the Hafod forest and then climbing via a cunning short cut back onto the Trans Cambrian Way route. An entertaining section of narrow road took us to the shores of the Claerwen reservoir.  Matt estimated that it would take us an hour to retrace our steps along the track and was right. I suffered a pinch flat from riding over some rocks on a fast section. 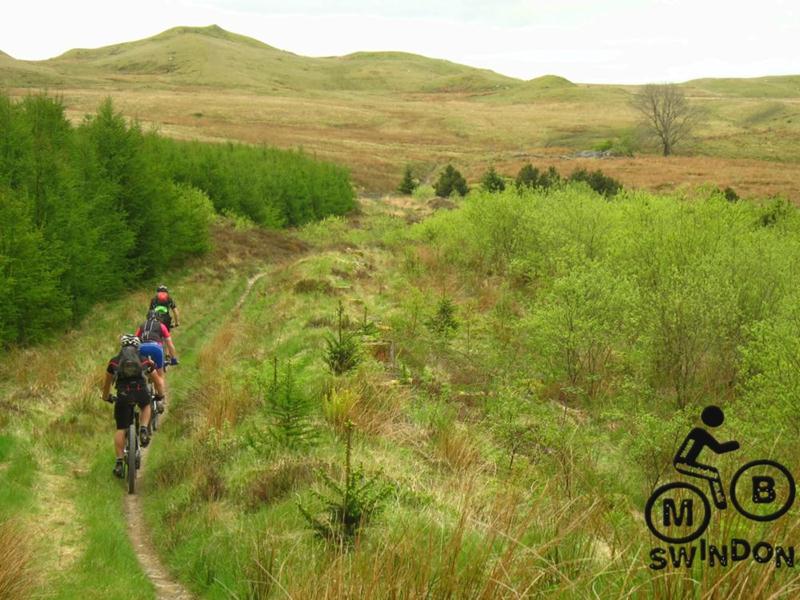 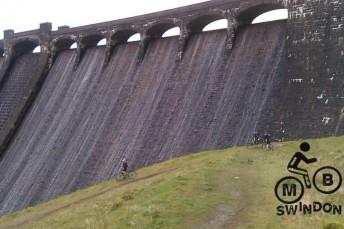 We found Nia and the van lurking just round the corner from the end of the reservoir. This was a very welcome sight and, once again, we stoked up on pasta, quiche and cake. The final two sections of the route followed a similar pattern to the yoga weekend ride – climbing up to the radio masts and then descending to the chapel via a fast rock strewn path. The cycle path was followed to the tramway and up to the black chalet. Matt opted for the shorter and steeper route up the mountain; we all had to walk the steepest section and that was followed by a ride on steep, energy sapping grass to the summit. It was worth the effort though because I knew that we would soon be finishing on the “The Links” descent. 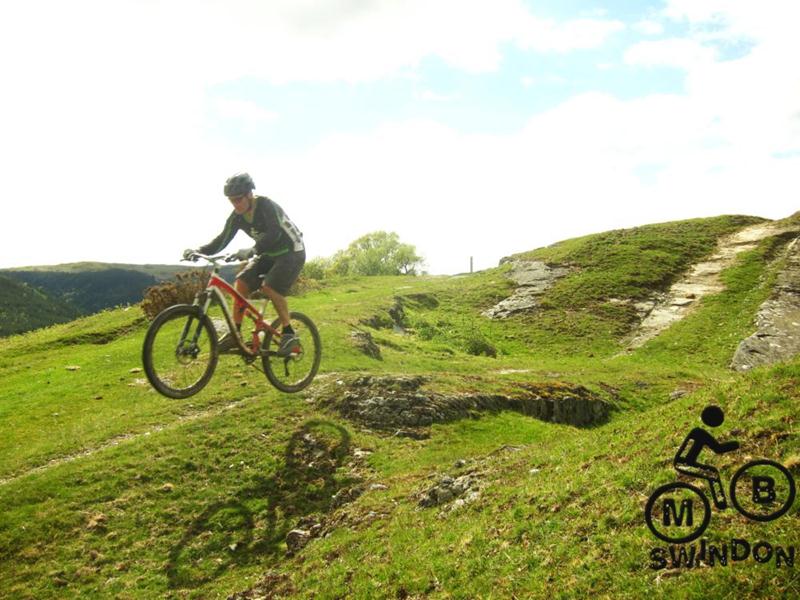 The Links descent is 2km (1.25 miles) long and descends 200m. That might not sound like a massive descent but it’s a steady angle the whole way. It allows a lot of speed to be built up on the main track. This has rocky sections at regular intervals that can be avoided, rolled or jumped depending on the line choice. It’s a favourite descent for many local riders. At the bottom is a good skills section with some steep rock ramps and jumps.

We finished off by rolling back to Rhayader and the short distance to the hotel.

A big thanks to Matt and Nia for organising such a great event. Two days of challenging riding in a beautiful part of the country with weather to suit. We’re keen to do more A Cycling events so keep an eye on the events page, our facebook group and twitter feed.