I love mountain biking. I love yoga. So I was excited when Facebook spewed up an advert for  “a mountain biking yoga weekend”.  I liked the idea so much that I booked a place before reading the details. Probably. It was organised by Mountain Yoga Breaks – see their website, Facebook and Twitter pages.

I’ve been riding for over a decade and I discovered yoga about a year ago. I really wish I’d found it earlier! Sports therapist Nancy Braithewaite put me on to it as a cure to lack of flexibility due to all time riding with no stretching.

Ask most people what yoga is and they will probably describe a room of beautiful people stretched into painful looking poses with their feet round their neck whilst they practice a self-satisfied, smug expression. They will talk for hours about chakra energy channel release and the benefits of doing  the om chant whilst in a head-stand.   Roughly speaking about half of that is true, though I haven’t found the location of the room of beautiful people yet. There is no pain involved – an important axiom is always doing what is right for yourself.  Wikipedia article on yoga.

As a starting point then yoga can be regarded as a physical conditioning routine that involves holding the body in various physical stances and poses.  This gently stretches muscles and brings about flexibility, strength, balance and resiliance. Yoga can help redress the well known physical problems caused by cycling such  muscle contraction in the hips and legs, lower back pain and stiffness in the neck and shoulders. Daily activities such as driving or sitting at a desk also contribute to the problems. This alone is reason enough to practice yoga.

Many soon discover that feeling better physically also makes them feel better mentally.  Modern life is very much based on disconnecting via over stimulation, distraction activities, over eating, drinking and the search for artificial highs.  Reconnecting can be very exciting and satisfying. The self focus of yoga is mediative and encourages  calm, clarity and self control.  These are very powerful states of mind that can improve all aspects of life and are acknowledged as helping sports performance.

The really great thing about yoga is that it can be whatever you want it to be: physical training, mind expansion, relaxation time, mental training, all of the above, none of the above. I’m a massive advocate of yoga because it’s personally brought about so many positive changes in my life.

There’s loads of yoga classes out there in various styles. Try some and see if it suits you. Also worth a punt is Pilates. It’s a bit like yoga but more of a physical training routine and less spiritual. 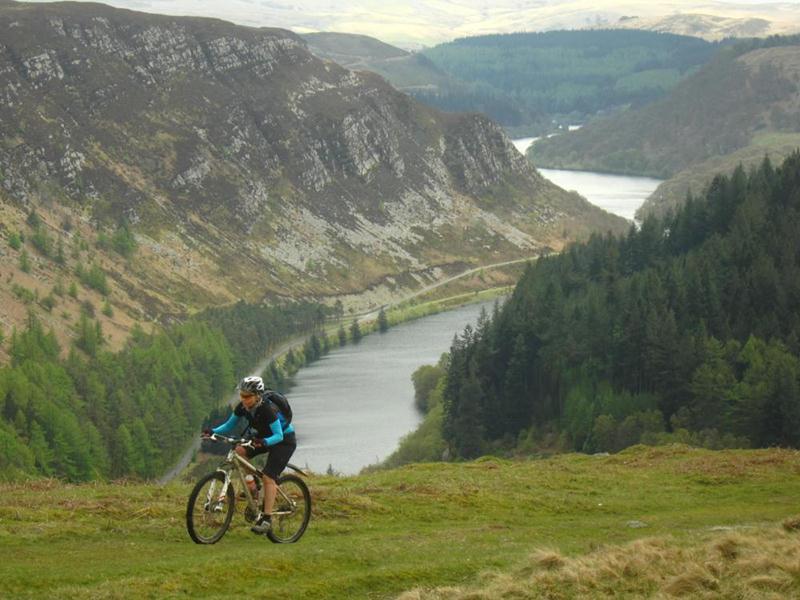 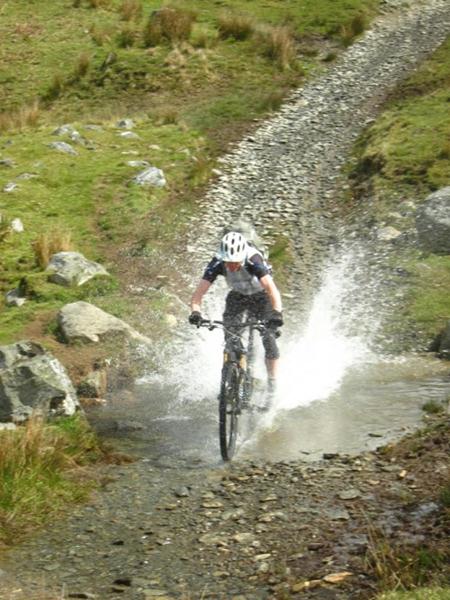 The concept for the holiday was simple: spend a weekend in mid Wales with two days riding on some of the best natural trails in the country. Fill the rest of the time with yoga, eating cake, drinking tea and sleeping.

Experienced yoga instructor Polly Clark is also a mountain biker so has developed classes that can really make a difference to riders. Yoga is non competitive, but at the first session I watched in awe as one lady was able to reach right down onto her elbows for a pose where I could hardly touch the ground with my finger tips…as I cheated a bit by bending my back and straining a little bit.  Yoga is all about yourself though – so the 0.1mm of stretch I was managing was still making progress for me. Whatever your level you should walk out of a yoga class feeling a lot better than when you walked in. Which was true on the weekend.

I arrived on Friday evening to find a friendly group of riders with a mixture of riding and yoga experience levels. The Elan Valley Lodge was a brilliant location. Billed as a four star youth hostel it offered clean and comfortable en-suite rooms, good food, social areas with wi-fi and, of course, a large room for the yoga classes.

The rides were guided by Phil from Mountain Bike Wales (also on Facebook & Twitter). As a experienced local rider and someone who trains instructors then Phil was able to give a great experience to a mixed group of riders.  The terrain gave something for everyone – for example “the link” descent near Rhayader has a series of rocky sections with multiple lines across and round them so they can be avoided, rolled or jumped depending on mood and experience level. Polly had booked some amazing weather too, with sun available on both days. We spent a fair amount of time riding through water so this was a good thing. 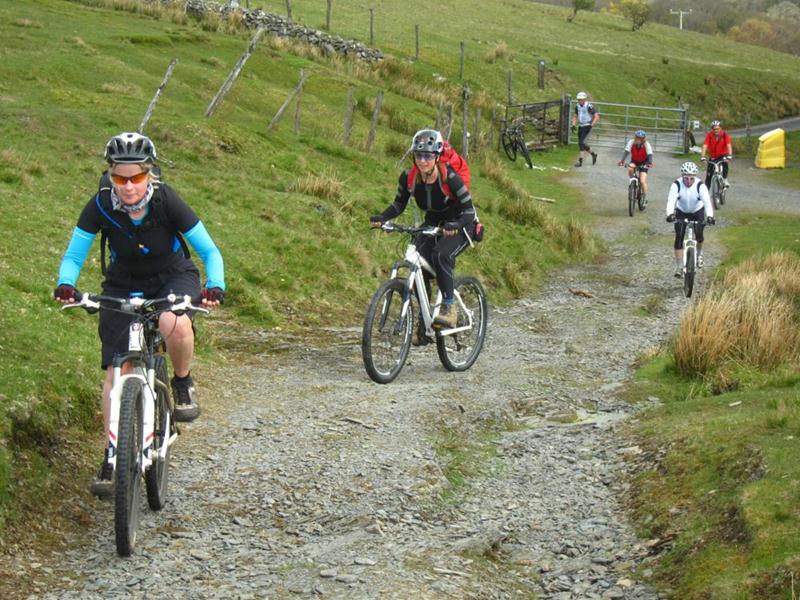 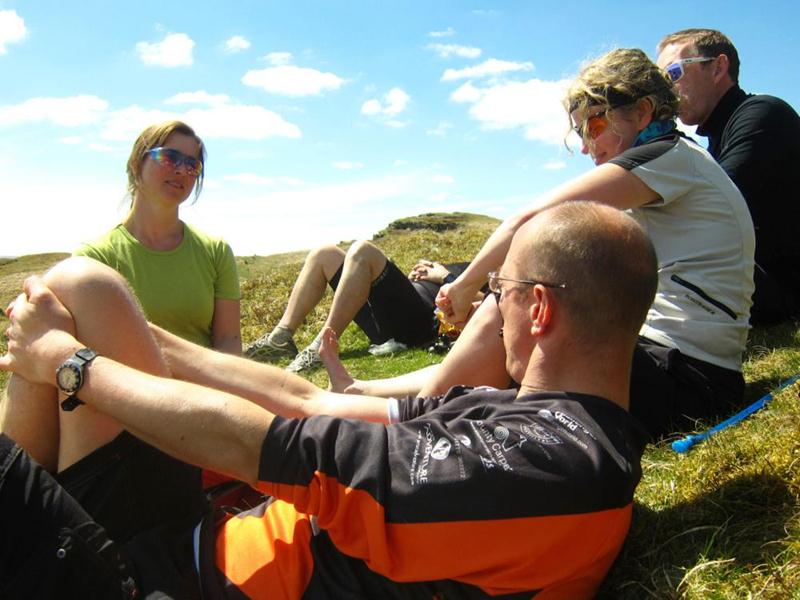 The Saturday route took in “puke hill” and followed the Trans Cambrian route (see our snowy version from march) for a while before linking back via a descent to the chapel, a big climb and then “the link” descent.

Sadly Pippa parted company with her bike on the last descent. She was very annoyed that it was “on an easy section”. She returned on Saturday night to show off her bruises including a fetching egg-shaped lump on her forehead.

The Sunday route was a bit shorter and worked anti clockwise round the Cefn, across the river Elan, followed a big climb up “the link” and the looped round to a long descent back into the main Elan valley. The lunch stop on top of the mountain gave me an ideal opportunity to explain the sports therapy triangle situation I’m in.

A few top tips from the weekend: follow the route the guide takes when in the water. Follow the guide if they use the bridge rather than riding through the water. If you are doing the half-splits and your foot is being pushed hard into the ground then it is unlikely that you will be able to lift it.

I really enjoyed the weekend.  That’s not surprising since I love mountain biking, yoga, cake, tea, good riding and talking bollocks. All bases were covered. I’m definitely going back for more.