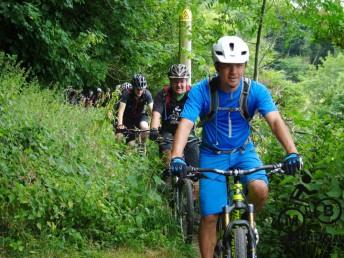 With a heatwave on our hands it was an ideal chance to ride the route that Bigfoot MBC had wanted to show us on our previous excursion with them back in November 2012. At that time the year of wet had wrecked the trails.  Conditions had still been heavy going in March when we’d ridden some of the area on  Gary’s Painful Painswick ride (including some video). After several weeks of blue skies and extreme temperatures we knew that conditions would be spot on this time.

We met at the Royal William pub with fourteen from MBSwindon including some from Worcester plus around ten from Bigfoot. This gave us the best part of twenty four riders (assuming my calculator app is working properly). It’s difficult to keep groups this size together as we proved after ten minutes of riding. I slowed to check that someone pumping their tyre up knew where to go and by the time we made it to the top of the hill with three others we no idea where the main group had gone. 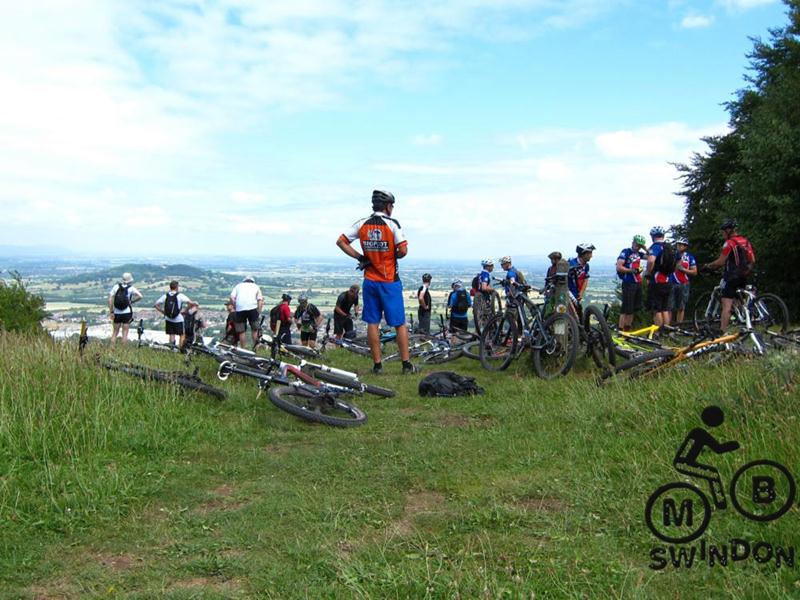 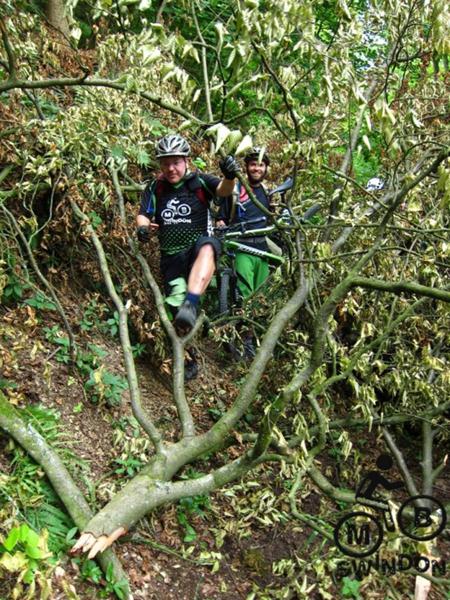 Not to worry though. Utilising the wonders of the mobile telephone we were able to reattach ourselves to the main group who’d all been down on Janet (recycled joke from the previous ride report). Of course, when I were a lad we didn’t have mobile phones for moments like this. We didn’t have  Facebook or Twitter either:  we had a life.  No doubt we’ll be using google glass live in the future to see where everyone is and carrying out virtual strava races. If there’s any signal.

Conditions in the woods were great. There was no doubt about it being a summer’s day but the shade under the trees kept it the pleasant side of warm. A dusty layer of  woodland mulch had been swept to the sides of the trails and underneath the ground was rock hard after several weeks without rain. We were taken down several tight sections of singletrack with a few places where the wide bars had to be threaded through the trees.

A killer climb took us up to Cooper’s hill. This is where the cheese rolling takes place. It’s very steep and we were wondering if the houses at the bottom ever received the out of control cheese through their windows.  I can see the local newspaper headline “breaking news….dreams shattered after out of control dairy disaster. Police are chasing the details. Supporters have leapt to the competitor’s defence.  We’ll keep you in the frame. ” Sorry, this is descending into a farce. #wastedopportunity

Moving on.  We had a view of Bredon hill and the Malverns (links go to previous ride reports). 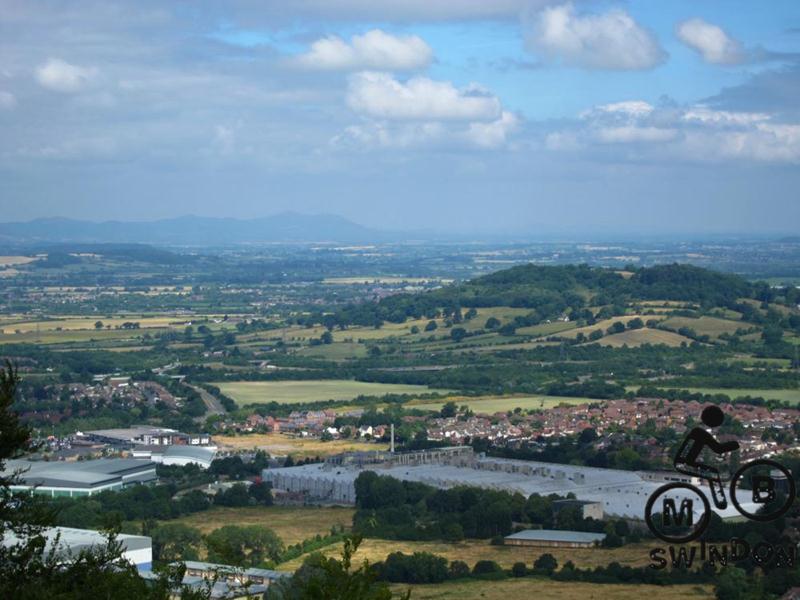 After a classic descent down to the scout hut a long climb took us to “the racetrack”. We rode down some of this but not for long. Turning right off this took us to a special rooty steep section  and then a ramp that even looks steep in the photos. Most riders made it down. A few walked and found that more difficult than riding it. Definitely a head trick.

The climb back up included a team building exercise – the challenge was to pass all the bikes through the branches of a fallen down tree in the allotted time. 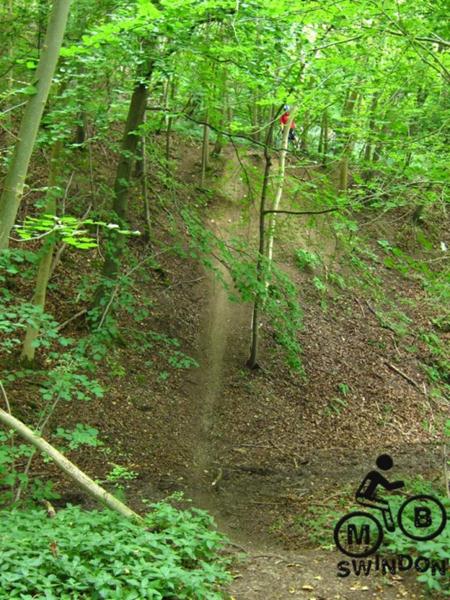 A load more singletrack took us round to the hotel at Birdlip and then a quick loop around the woods out the back. I remember the big bomb hole at the end of this. Years ago on a ride with cccccc (Cheltenham and County Cycling Club Collective Cycleout) we’d tried this the other way round. That mean riding as fast as possible along the exit into the hole and then carrying the speed up the steep rocky bit. I’d got as far as my front wheel being over the lip of the rock before realising I wasn’t going to make it. I then rolled backwards into the hole and jumped off the bike into the leaves at the bottom. No pain was involved. The next rider had already committed though so there was a near miss. Those were the days. If it happened now then everyone would have stood around uploading photos to Facebook.

Next we road the racetrack properly. Being a bit wider and straighter than most of the other trails this gave some easy fun and the rooty drops brought a smile to my face. We nipped back down the steep section from earlier. It hadn’t changed much in the intervening hour.

A climb took us to the wall descent which was just as good as the last time. We all managed to miss the tree in the bomb hole unlike last time (there’s a load of photos and video in the March ride report).

We made it back to the pub in good time. A great ride in perfect conditions and a nice change to have a non-epic day. Big thanks to Jason and  Bigfoot MBC for showing us around. 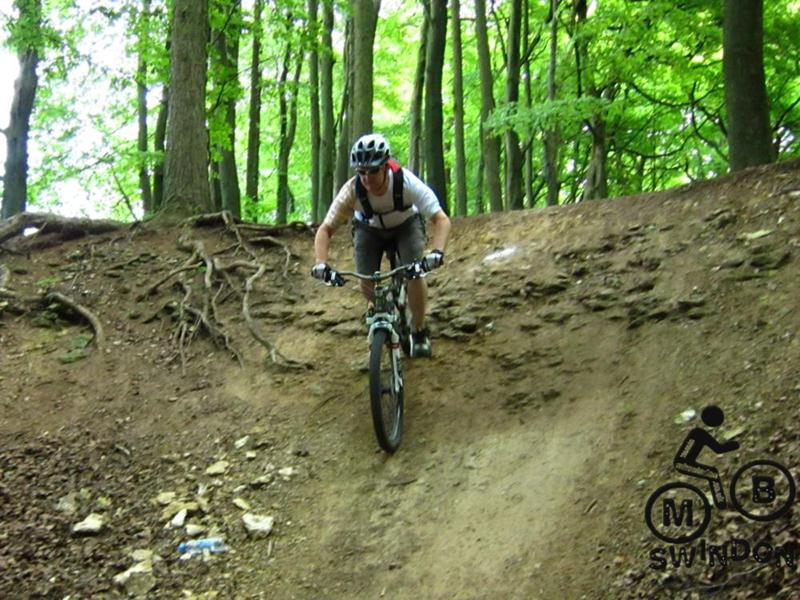