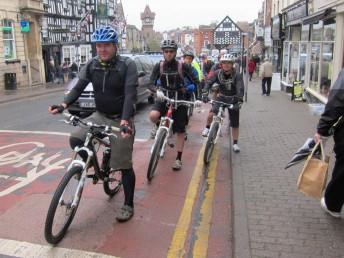 The Malvern Hills was another new venue for MB Swindon and this particular outing was led by Ross Miller of Ledbury Mountain Bikers.

We set off at 10:30 from the centre of Ledbury in clear weather and we followed a short stretch of road out of town beofre turning onto our first climb of the day. This went up a track then down over a bit of rooty singletrack. A gate at the bottom led to the start of another climb, this time up a damp field and here the weather changed – drizzle with heavier bursts of rain a bit of mist to add to the fun.

Gary Palmer got tangled up with a piece of wood, breaking two spokes in the rear wheel. 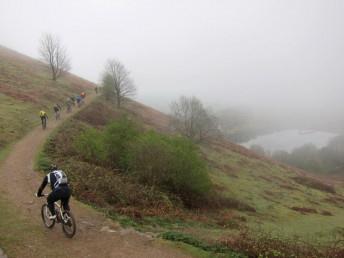 The route took us past Eastnor Castle, home of the Mountain Mayhem 24hour race.

At Hollybush car park we started on one of the main climbs up onto Midsummer Hill and then Swinyard Hill, muddy and wet in places and hard work to say the least. Part way up this Gary Palmer had the first “off” of the day courtesy of a metal drainage channel! Not a good day for Gary!

Eventually we arrived on the main Malvern Hills ridgeline and followed a byeway round the Herefordshire Beacon aka British Camp (an ancient monument so no cycling allowed).

We were by this time also realising just how slippery the ancient Pre-Cambrian rocks of the Malverns are in the wet so a certain amount of care was needed!

The route now worked North to Wyche Cutting and a pub stop at the Wyche Inn. 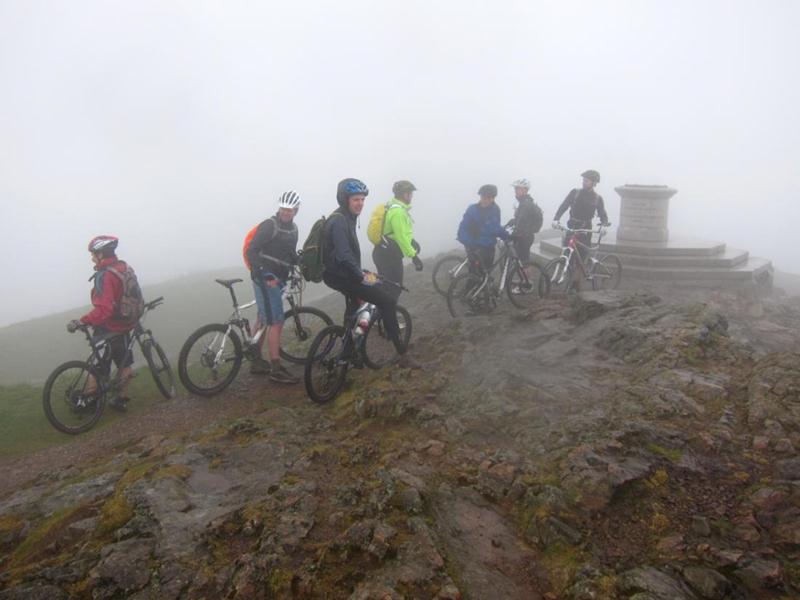 Suitably refreshed we set off again in the mist only to stop for the inevitable punctures. Eventually a somewhat indirect route led us to the top of the Worcestershire Beacon, normally an excellent viewpoint; but not today. It was decided that the best descent off the Beacon was just a bit too iffy in thick mist as the cyclist/walker interface could well have caused problems. We therefore reversed our route up and rode a circuit of North Hill instead. At this point Gary Palmer had another incident which involved his carbon frame and also took a wrong turn in the mist ending up in Malvern on the wrong side of the Hills for a return to Ledbury. He opted to ride back along the road with his poorly bike. “MBSwindon broke my bike!” 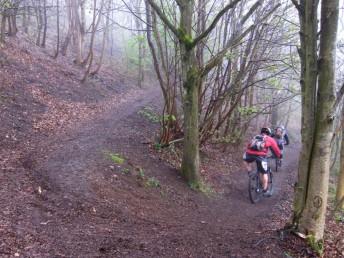 The rest of us now made our way back to Ledbury via fast tracks and quiet country roads plus a game of chase the roadie.

We did a bit of impromptu train spotting when we saw the Downs Light Railway at the bottom of a fast track.

All in all a good day out with lots of climbing and ending with a visit to the Brewery Inn in Ledbury. We had the Squitters Bar with an open fire to ourselves – I can’t think why!

There is plenty of riding on the Malvern Hills with a maze of bridleways to explore and some big hills to climb. However timing is crucial as the area is very popular with walkers and horse riders alike some of whom do tend to resent mountain bikers. All the walkers we met on the day were fine though.

Thanks to Ross for inventing the route. If you’re a Malvern area cyclist then check out Malvern Cycle Sport.