by Anthony Holmes (photos by Tom Stickland & Jay from Mudtrek)

Is spite of a distinctly unpromising weather forecast ten of us finally assembled at MudTrek on Friday evening.

Paul and I stopped off on the way for a spin round the Brechfa Blue/Green option to loosen up our legs for the main event on Saturday, whilst Graham and Tom Scott rode Cwmcarn and the Garw trails.  Richard Ford came via Leisure Lakes in Newport.  Last to arrive (inevitably) was Tom Stickland who then kept everyone awake by talking  well into the early hours!

I have to admit I was a bit apprehensive about my 4th visit here having damaged an Achilles Tendon in the FoD two weeks previously and therefore endured an enforced lay-off to try and let it recover.  If I had known what was in store I would probably have volunteered to help Nikki with the washing up and dog walking.

Fortunately the expected heavy rain held off on the Saturday and once Tom Stickland was ready we set off up the hill and then dived down into the Brechfa Forest on familiar trails and an enjoyably steep track.  A short climb and more singletrack and we came to a quarry with a steep back wall.  Dean wasted no time in showing us all how to ride down this more or less on sight. At this point Richard Barnett’s freewheel decided to let go leaving him with no drive at all.  A quick call back to HQ and a spare bike was on the way in the Landrover whilst Richard Sharkey escorted him down to a convenient RV point.  Fortunately this was the only mechanical of the day.  No punctures either which makes a change for an MBS ride! 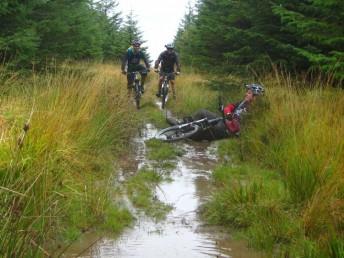 More climbing and we eventually came to a long, very wet and muddy descent, the only real option being to follow the stream gutter down all the way.  Quite awkward in places; but eventually this led to the first big climb of the day.   This done we re-grouped and then carried on to another descent.

Eventually we all met up at a road bridge for lunch and a hire bike for Richard arrived in the Landy.

More steady climbing followed across open countryside, at one point we found a young fox trapped in a snare; but were fortunately able to release it hopefully unharmed.  At this point the heavy rain arrived, made worse by a series of locked farm gates to negotiate.  After about 50 mins or so the rain eased off just in time for a long and grassy descent to a farm with a cheery farmer and then across a long footbridge over the Afon Cothi.  Most rode down the steps at the far end.

Another climb, a short and steep descent down to a small ford  and we were confronted by Jay’s little surprise!  What followed nearly broke me, the steepest, longest and hardest push up I have ever done from Ynys-Brechfa almost to the top of Parc hill – at least 250 m of vertical ascent.  At one point the only way I could make progress was to push the bike up, apply the brakes, step up to it and repeat etc.  There was a certain amount of muttering in the ranks to say the least.  Eventually however the gradient did ease but presented another problem.  A grassy track with deep ruts on either side.  Walk in the rut but push the bike over heavy grass; walk on the grass but lean over the bike in the rut.  Neither option was too much fun. At the top another gate and although I managed to heave the Five over Jay took pity on me and opened the gate for me.  It was also at this point that Richard Ford demonstrated his cattle handling expertise – to make them move walk towards them waving the arms and shouting F*** Off!  Very impressive. 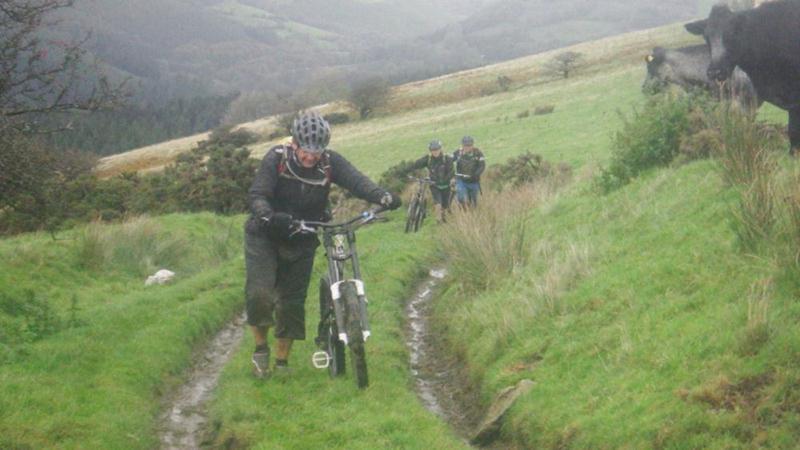 A bit of easy track, some road and forest track brought us to the final descent  down through thick forest on a rutted and in places slippery track.  Again the best option was to stay in one of the ruts where at least the rain had washed away the mud.  Good fun and a fine end to the day.

A quick sprint (?) down the road to Abergorlech and it was time to meet up with the Landy , some dry clothes and a slice or two of Margaret Holmes’ Apple cake before diving into the Black Lion pub.  Very welcome indeed and a first for MBS at MudTrek I think.

However it has to be said that Tom Stickland and Tom Scott chose to ride the nine miles back up the hill.  Nutjobs!  The rest of us went back in the Landy and following bike washing, showering, etc were soon ready for Nikki’s excellent Lasagne.

A great day’s mtb’ing and for me at least a hard day indeed.  The big push gave a new meaning to the expression Jay Walking. 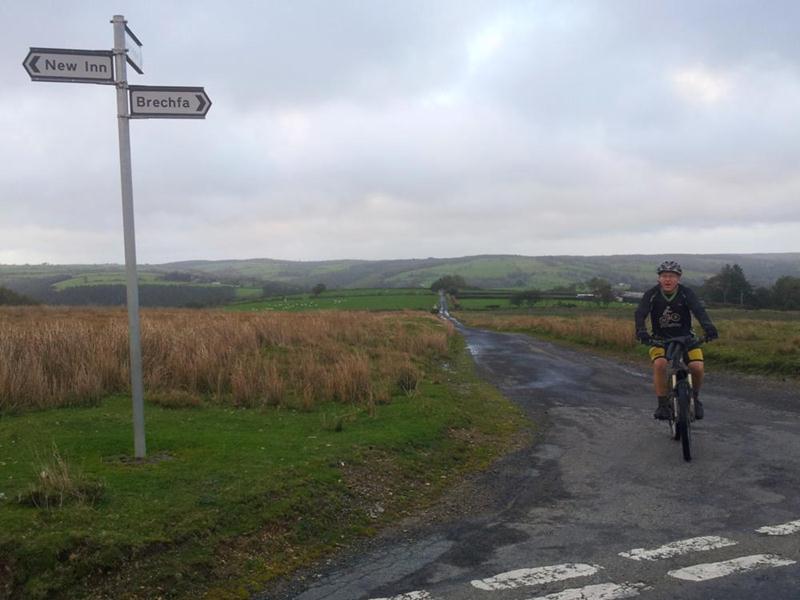 On Sunday some of us went riding.  Tom Stickland went off to some extreme Red Kite XC event.  Paul and I dodged showers to ride the short but excellent Cilycwm trail.  Tom Scott and Graham rode the Raven at Brechfa and then went on to Garw – again.  Others went home for Sunday lunch.

Another epic MudTrek weekend complete then; but I have to mention the fantastic welcome given by our hosts Jay and Nikki, Richard Sharkey and Simon.  It is always a pleasure to stay here and I’m looking forward to another trip next year – as long as I don’t have to push up that hill again Jay!  The Preseli hills sound good?