Shortcut to video and photo gallery. 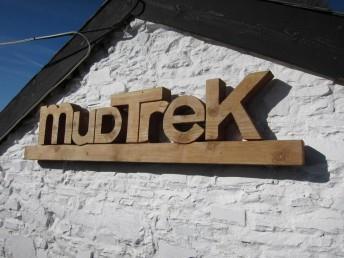 Mudtrek mountain bike breaks offer catered riding holidays and are based near Brechfa in Carmarthenshire, Wales. We were on a trip there in October 2012 when co-owner Jay mentioned that he wanted to build a skills loop in a strip of nearby woodland. I said that I could probably find a group of people to help him, based on our experiences at Croft Trail build days in Swindon.

The woods are about 300m long, 10m wide and have a vertical drop of 25m, giving an average gradient of 1 in 10. The access track runs up the side of the woods so it’s ideal for a skills loop.

We scheduled a weekend in January but Nikki from Mudtrek broke her wrist and then it snowed as well. So the event was rescheduled for Thursday 21st  and Friday 22nd of March. 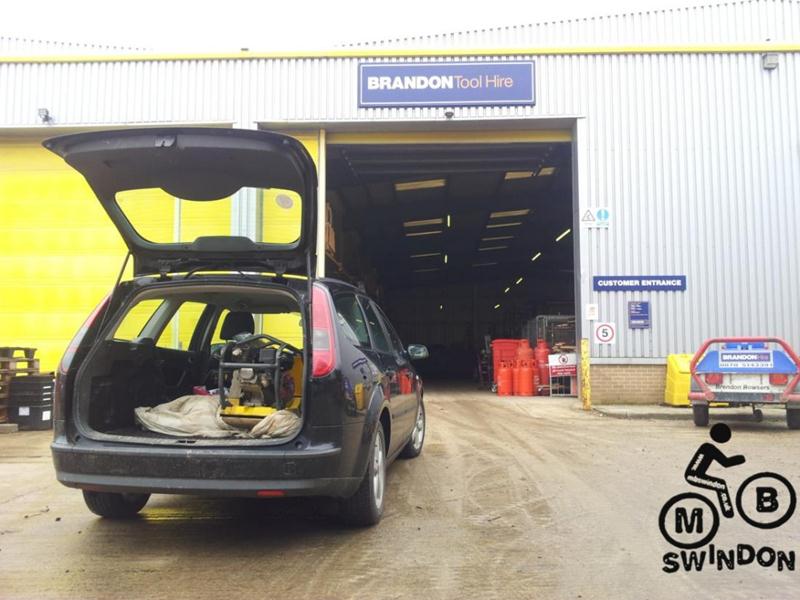 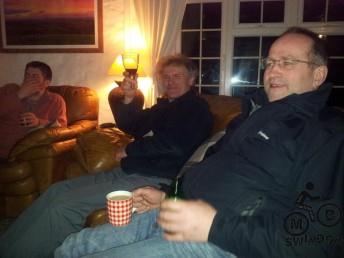 I arrived (late) on Wednesday evening to find Gary Palmer and Stuart sat in Mudtrek HQ drinking beer and tea with Nikki and Jay. Bedtime happened at 2am. Oops.

Jay had already dug out the trail line so our tasks were to shift rocks to use as a base for the trail and then tip and compact scalpings onto the top.

Sam Brown joined us early the next morning.  An icy wind was blowing as we pushed the barrows of tools to the top of the trail. On the plus side the overnight rain had ceased. We immediately got to work dumping rocks into the trail base and hand shifting scalpings from piles that Jay had dumped ready for us. The dumper was used to shift more rocks from near the Mudtrek HQ and also to shift scalpings. Mud and rocks were used to build up berms on the tight corners.

Tony and Margaret Holmes joined us in the morning, followed a bit later by Tom Scott. By the end of the day then the whole top half had been filled with rock and about half of that was surfaced and compacted. The extreme cold had given several of us headaches. 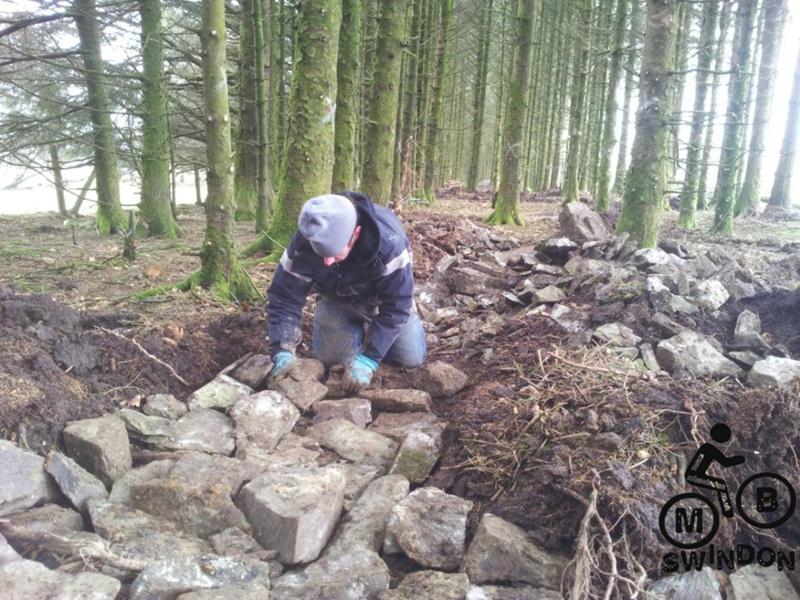 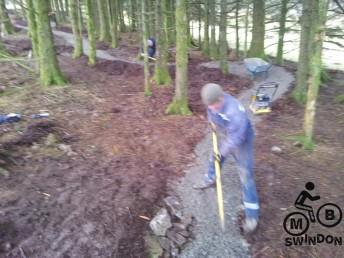 Rafe and Richard arrived in the evening.

It rained hard overnight and didn’t stop on Friday morning. Walking out at 9:30am I was hit by the cold wind and the rain. It was a major struggle to make progress up the track towards the trail. There was nothing for it but to get on with the job.

The rain had saturated the ground, with puddles forming in various places on the trail.  The rock base looked like a very good idea. In several places the water was above ground level but not above the rock level. 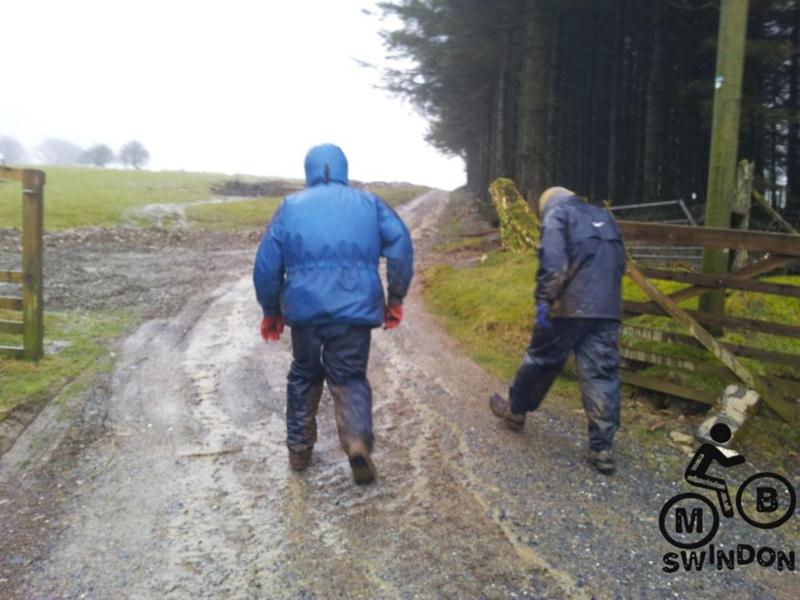 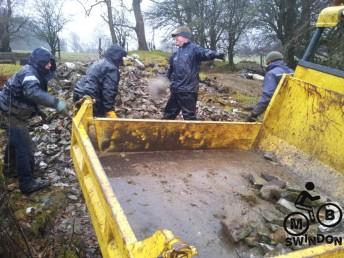 Everyone took up the challenge and kept working in the unpleasant conditions. Occasionally the rain would die down for a bit and combined with the shelter from the trees then things didn’t seem so bad. Then the rain would return and icy gusts of wind would rip through the trees. We returned to base for warmth at 11am and vowed to put in another hour when we ventured back out at midday.

We put our wet kit back on after lunch ready for our final push. It was looking like we’d get all of the rock in place by the end of the day and surface the top section. At about 3pm I noticed that I wasn’t cold any more and the conditions actually became pleasant. This was only relative to what we’d experienced earlier though – the new arrivals for the weekend of riding complained that conditions were dire.

As darkness set we packed the tools away and compacted the last of the scalpings. The whole top section had been filled in and about a quarter of the top section. 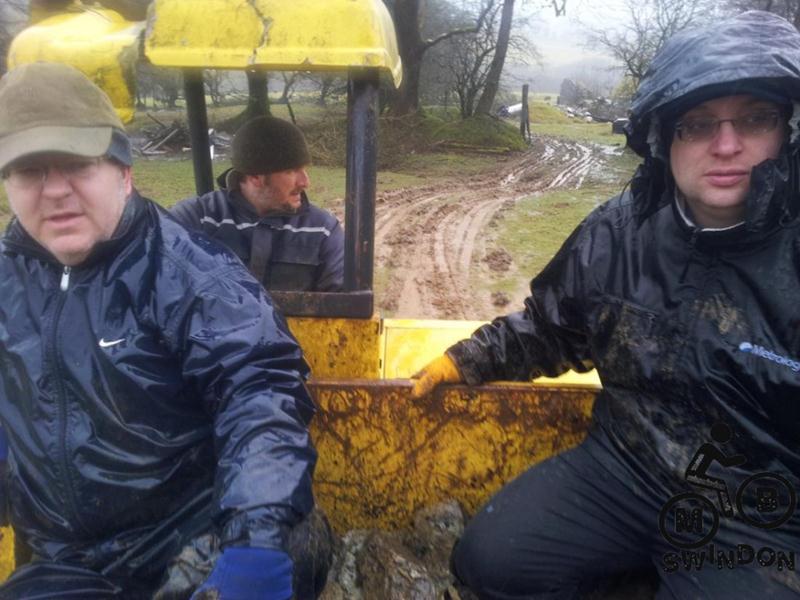 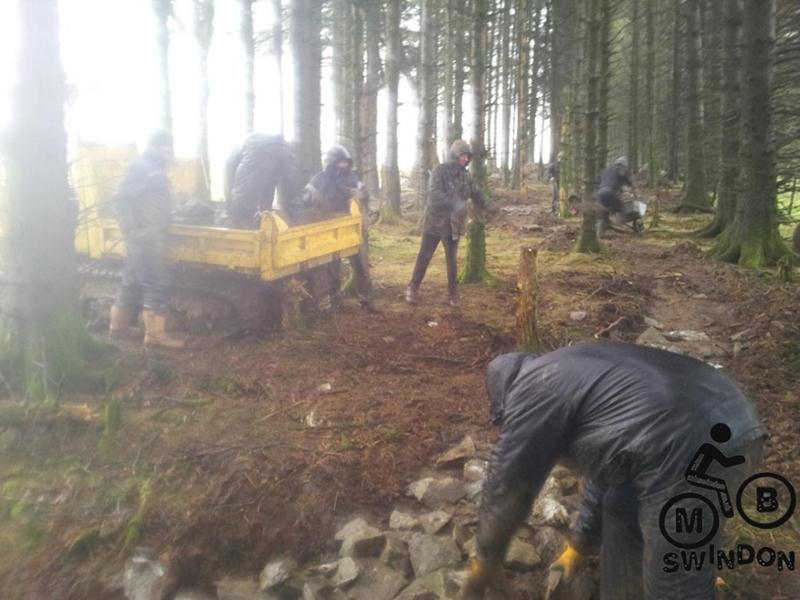 Major progress had been made despite the conditions.  This was a big step forwards in Jay’s aims to build at least two lines for the skills park which will have a variety of technical features.

Present over the build session were:

See the report from the Matt Page skills weekend at Mudtrek.