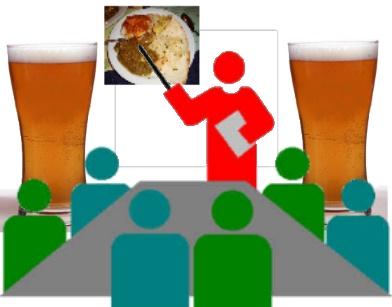 The first club AGM* was held at the Check Inn on Sunday 27th February 2011.

At 7pm the committee table was ready but there was only one guest present. With the typical MBSwindon approach to start times it was 7:20 before we had all 20 people present. We had the curry meal booked for 8pm, so we motored through the topics at a decent pace. We finished five minutes ahead of schedule.

Regarding the turnout: we were happy that we had enough people there to make the preparation work worth it. We assumed that the majority of the other 100 members were satisfied with the club and felt no need to be present.

The agenda consisted of:

Things went quiet from December 2009 to February 2010 due to there being no money, no materials and interminable rain. We decided to start the club to raise funds for the trail.

The club was launched in February 2010.

We had 160 tonnes of material with a value of £2,300 delivered. That’s enough to cover 2.2km of trail. Map measurements show that we surfaced about 2.4km of trail. We moved the equivalent of 1,600 barrow loads, or 640 power barrow loads. Taking a single shovel full as 4kg then we moved 40,000 shovel scoops; a rate of about 60mm of trail per scoop.

Over the year we organised:

We organised 2 all women rides. We only started late in the year, so there will be a lot more in 2011.

We had 2 articles in the Swindon Advertiser, 2 mentions in MBR magazine and one in MB-UK magazine. We won the “Most Innovative Club” award at the 2010 Swindon and Wiltshire sports awards. This got us a mention on Total Star radio. Rafe has some events featured in the National Trails Ridgeway magazine. The “Good Mountain Biking Guide” is published on the 15th March 2010 with several MBSwindon photographs and the Croft Trail featured as a ride location.

The banner beside the motorway that mysteriously appeared also gained us a lot of attention. We’ve no idea who put it up.

Thanks to Kat for making the advertising banner and the MBSwindon mugs.

I’m very proud of what we’ve achieved – from just Phil and myself the whole thing has grown. I want the club to continue being proactive, friendly, fun and welcoming to new members.

The ladies only rides at the Croft Trail have been a great success. It was snowing on the first ride day but we still had ten riders. We’ve got another two rides on the calendar and there will be more happening over the year. We’ve got our events listed on the Girlmtnbiker website too.

I’d like to start by pointing out that none of the MBSwindon team receive expenses or payment for anything that they do. It’s run entirely by volunteers who do it because they enjoy it.

The financial statement was presented to the meeting. Please contact us if you wish to see a copy.

Following the success of Rafe’s ‘Introduction to Mountain Biking’ courses last year then we managed to secure funding for Chris and Pete to also achieve MIAS Level 2 Instructor qualifications and so will be expanding our offerings for 2011.

The ‘Intro’ courses will be a very similar format to last year with 6 dates planned between April and August 2011. In addition to this we will also be offering a ‘Trail Riding Skills’ course – again with 6 dates planned between April and August. This new course will be based at The Croft Trail and is intended for both novice riders that want to take the next step, or more experienced riders that want to hone their skills to really get the most out riding more technical trails. Both course programmes will have a ladies only option.

This year we will be charging £15 for MBSwindon club members or £20 for non members – all proceeds will go directly into supporting the club and its work at the Croft Trail.

See the training page or get in touch with any of the MB Swindon team.

Alan West resigned from his positon as events officer. Chris Hopkinson took his place. All other committee members chose to remain and were re-elected.

There was a request for an update on the build plans for the triangle section. The answer is that we do intend to build around 1km of new trail in the triangle section, including two new bridges, jumps and a set of rollers and berms. This project has been put on hold so that the existing trail can be surfaced and made weather proof before the next winter sets in. Plans from December showing the triangle.

Sharon Yeates thanked the club for being sociable and welcoming to new members.

Pete Ratcliffe said that the committee had sent 2,900 emails between themselves over the year and were working continuously to develop and promote the club.

The committee stated that they were always looking for input and ideas from members, whether that be route suggestions, ride leading, helping at events, taking photographs, writing for the website, asking businesses about member discounts or any other way to help the club.