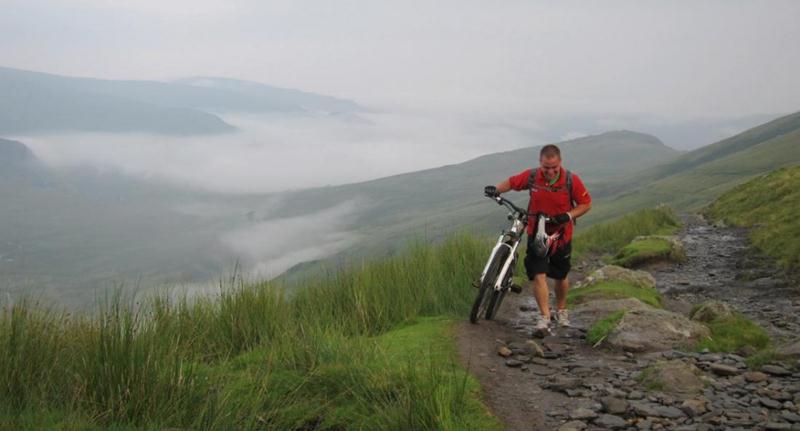 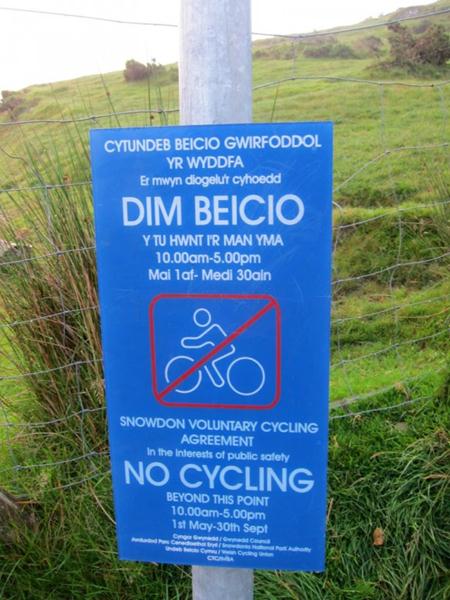 The idea was very simple: ride and push all the way to the top of Snowdon (1085m high ) and then turn round and ride down it all.

Most people take the Llanberis path for the ascent. This starts on the road past the Snowdon mountain railway station in Llanberis and is waymarked all the way to the top and follows a similar line to the railway.

There are three descent options: straight back down the Llanberis path, a more tricky option via the Ranger’s Path and a third option via Rhyd Ddu. All three are obvious on the OS map (bing link).

There is a voluntary ban on cycling between 10am and 5pm in the summer months.

For our first trip we decided to follow the easiest option of the Llanberis path. This gave us a good chance to recce the lines on the way up and also a longer descent. Don’t underestimate the fun factor of this simple option – it still offers a lot of rocks, ramps, steps and drops.

The previous few days had been hot and dry after a long spell of rain. So we were fairly hopeful for a clear descent once the sun had dispelled the clouds. However, it had rained overnight and a bit of drizzle was still present when we met at 6am. We were hopeful that the sun would dispel the clouds by the time we reached the top.

By 6:30am we were ready to go and set off on our climb. After passing the mountain railway station then the road quickly steepened. We kept on riding until the signpost for the bridleway appeared.

We got our first look at what the descent was going to offer us not long after – a set of rocky steps on the first corner. 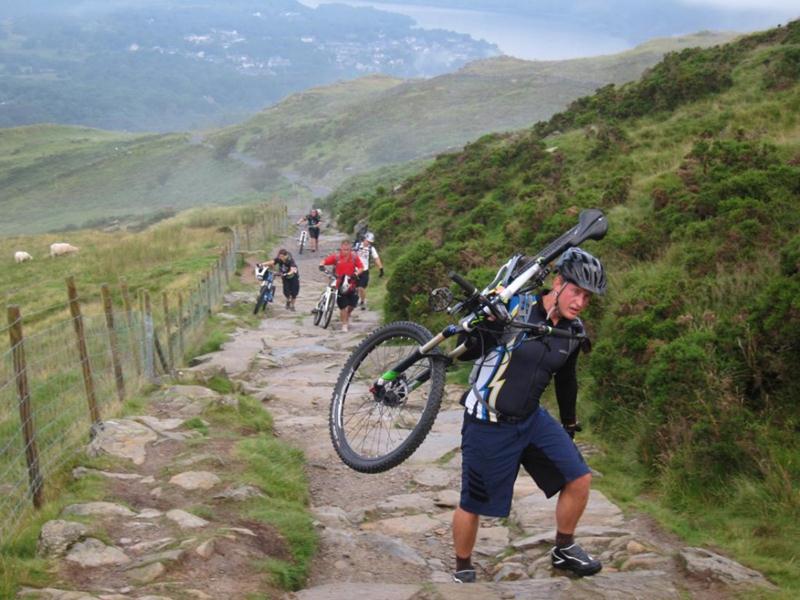 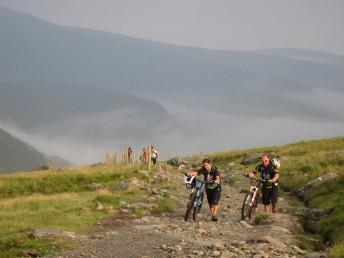 We rode as much as we could in between pushing up steep sections past rocks. The path was a few metres wide and generally covered in loose rocks of various sizes. Some sections had been cobbled with large rocks in response to the high levels of walking traffic that the path gets.

We reached the half way house within about 45 minutes. According to the map this is at a height of 530m. This isn’t quite half way up in terms of height gain – we started at 100m, the summit is just under 1100m so half way is about 600m.

The route levelled for a while and we made good progress on the pedals. We could see where we were going next – the path steepened up an angled set of cobbles into the clouds towards Clogwyn station. This turned into a big push.

After a brief respite under the bridge near Clogwyn then the route steepened again. Enthusiasm levels were high by this stage because we’d done most of the height gain. We were able to pedal up the rest of the climb, deep in mist by now. 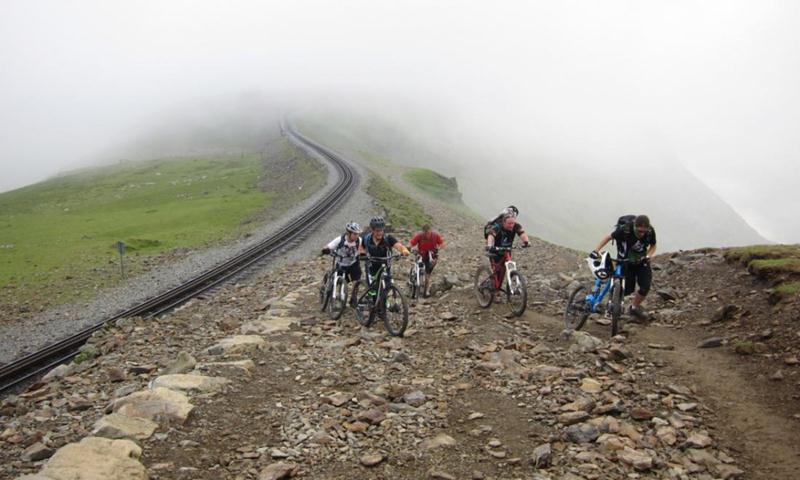 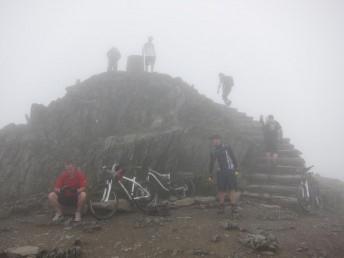 The path gradually levelled off until the junction with the the Rangers path and the Pyg Track. We knew that we only had a short climb left before reaching the top. The last section had a lot more in the way of steep steps and narow slabs.

In short time we reached the steps at the summit of the mountain. It was 8:45am so it had taken just over 2 hours to get there. After a quick photo on the top then we started on our main task: descending.

The steps at the top provided our first entertainment. My confidence was tested on the second set. After setting off into the mist I experienced a few seconds where I knew I was out of control and thought I was about to be launched over the front of the bike. As fear levels rose then the bottom of the steps appeared out of the mist and I knew I was going to be fine. It’s quite a long way to the nearest A&E from the top of a mountain so I wasn’t too keen on falling off. 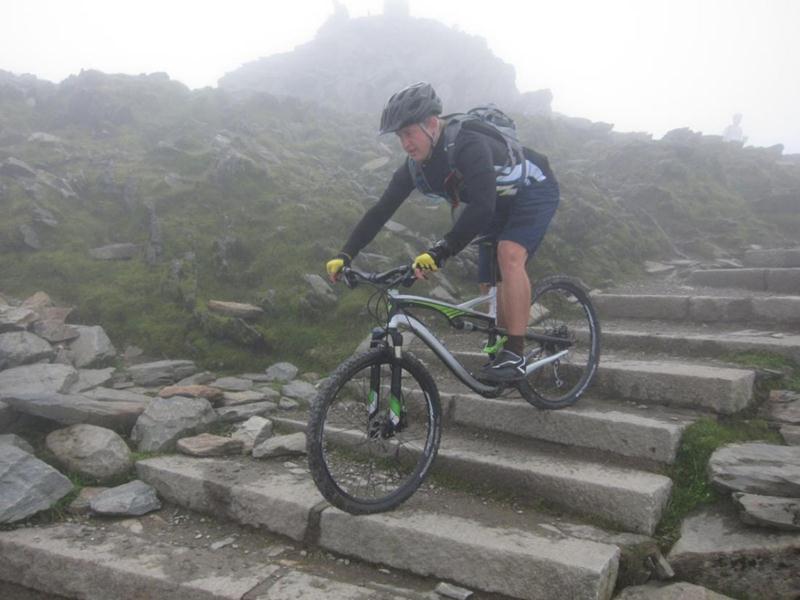 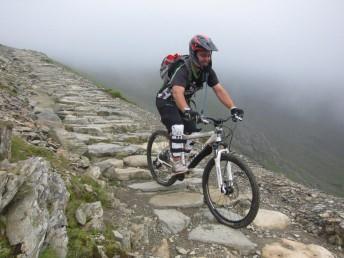 The first section of descent provided plenty in the way of big steps and also lines that fell into the category of “if only I was a better rider than I know that would be easy, but….”.

After that things eased off and visibily also improved. The steep section down to Clogwyn was our next bit of fun and after going under the bridge we had the steep cobbles to contend with. Even on a full suspension bike with 150mm of travel this was enough to induce blurry vision.

As we worked down then confidence levels rose and there was a lot of whooping at the rocks, steps, ramps and slabs.

Pawel had a few pinch flat issues and then I had one myself, despite using downhill tubes. A big whack on the sharp edge of a drainage channel did it for me. 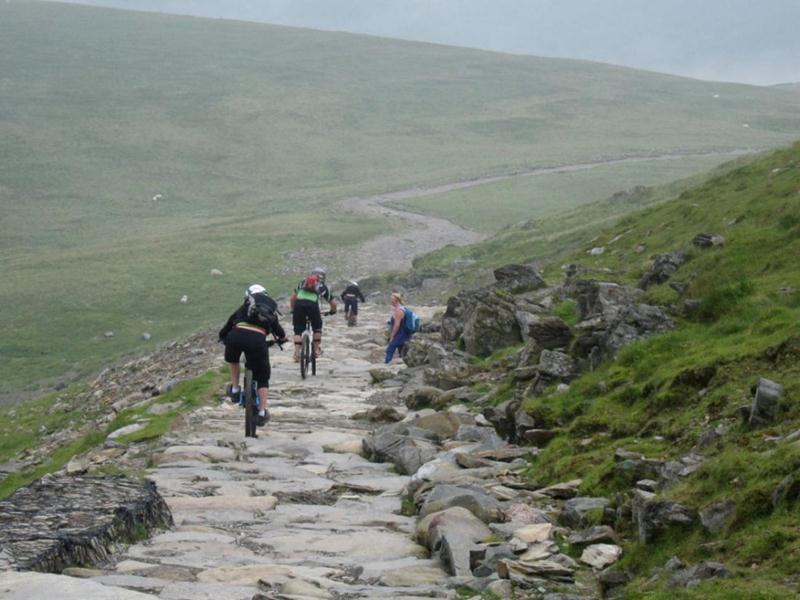 The set of steps just before the second railway bridge had me shouting out loud “this bike is bloody brilliant” to anyone who would listen (and those who were bored of hearing it by now). 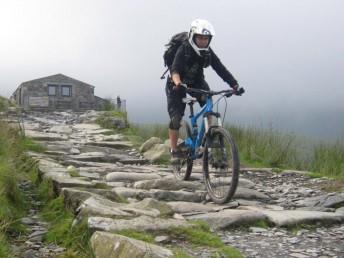 As 10am approached then the number of walkers rapidly increased. We were careful to avoid running anyone down and the audience added to the sense of occasion. We were all gradually becoming high and wanting more things to ride down and jump over.

One poor woman looked totally bemused as I shouted “this is the most fun I’ve had on a bike for a long time” on the final set of steps.

When we regrouped at the road it was agreed that riding down Snowdon was probably the most fun we’ve had on bikes in recent memory.

With Snowdon in the bag we called round to Pete’s Eats for our delayed breakfast.

In the afternoon two of us called into the Antur Stiniod uplift at Ffestiniog to try the new downhill trails. These have to feature in our future visits; they were really good entertainment. Photos.

We stayed at the Tyddyn Bychan rural bunkhouse who offer a club discount.