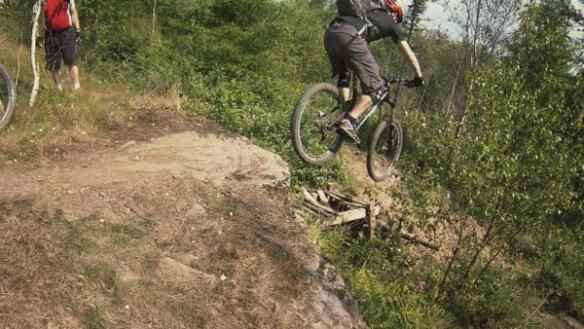 The ride was originally going to be lead by my mate John, but it ended up being co hosted by HalfWayUp MTB. This was a good thing as we got the best out of a larger pool of local knowledge. These guys live in the midst of some of the best DH trails I have ridden and arguably some of the best you will find in the UK.It was a hot day and the HalfWayUp boys meant business. They were gonna show us what mountain biking in South Wales was really all about. Cwmcarn is only 10 minutes away in a car, actually they ride there from Pontllanfraith if they have to, but they don’t. And we were about to find out why. In fact we were going to find out why they don’t actually need to go anywhere. 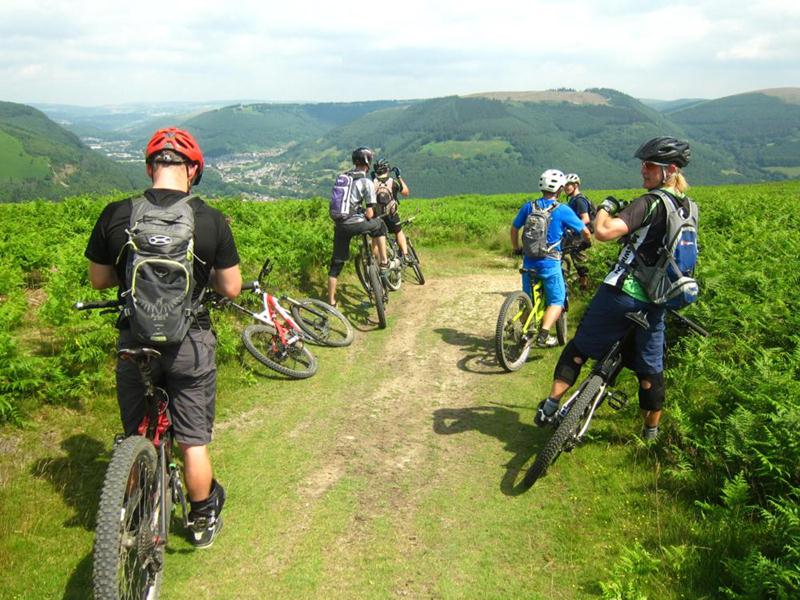 After a few miles climb from the Crown Pub we started at a trail called Squirrel, don’t know why it’s called that, it’s probably better not to ask! This had the two features of the day that stopped most riders. One pretty big sheer drop; at about 4 feet high we all know the theory but could do with working up to something like that not hitting it first. And then there followed gap jump (pictured above) which wasn’t that big physically, but mentally it was huge. No chance to mess this up and a rather dodgy landing area resembling a wooden bridge that even Indiana Jones would have questioned before stepping onto it! Next time maybe…

We then went onto Airstream and Slabs to name but a few of the DH trails that followed. To get to these runs we had to duck under some trees and eventually do a drop and duck under a tree at the same time. Only doable because you saw some one do it infront of you. 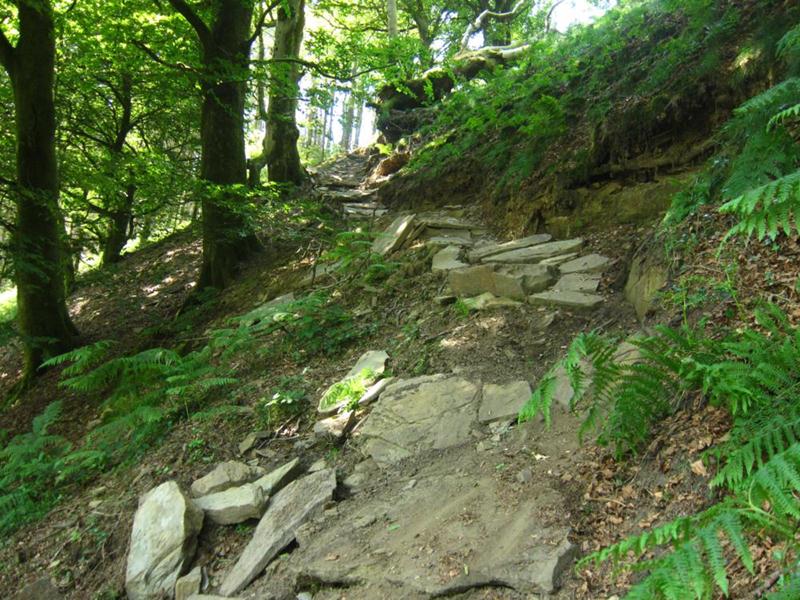 Slabs  resulted in a few minor offs and a pinch flat or two. The dusty trails were a joy to ride and I felt empowered by my recent trip to France and loved the steep hillsides and its tight switch backs. Drops and little jumps were a plenty, this was no Sunday school outing, but this was a close to mountain bike heaven. The drops got bigger and so did my balls. The last of our descents in Wyllie ended with a drop that was a good 10 feet down, but with a nice rollout at the bottom. This felt good!

Next we had a 200m climb to the Machen mast, it was hot and we were all feeling the heat. While we gathered at the trig point at 350m, there was a comedy discussion about going right right, left right or right left. Having ridden this trail before I knew which one I wanted to do and we did. Setting off on the rutted track down to the fence line we assembled in the trees and voted once more for Right Right and the Machen drops. 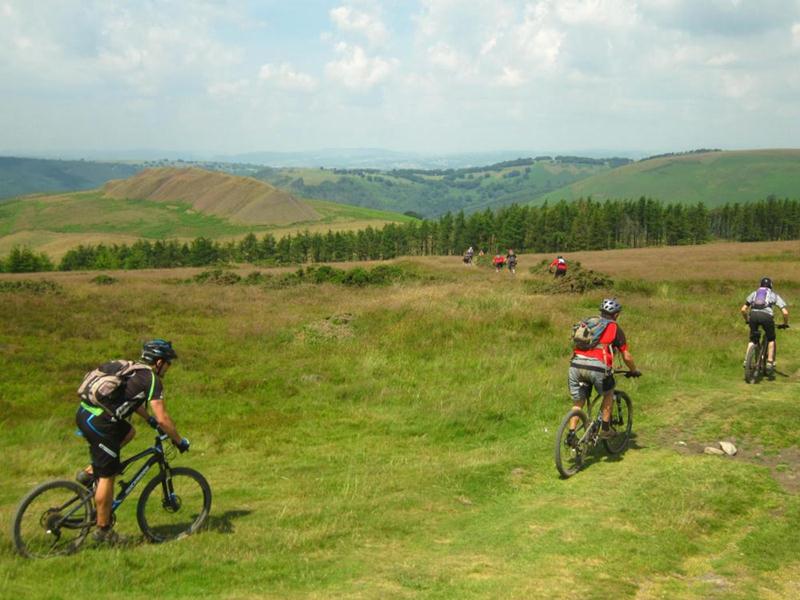 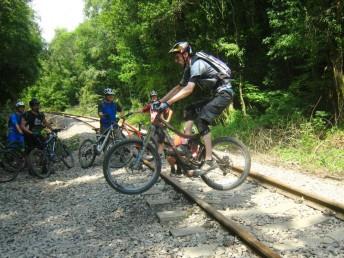 This trail is steep and rooty, and while its nice that the roots are dry rather than a familiar Welsh wet, it meant the ground was loose. The drops had got bigger since I had been here last – a harsh winter and an increasingly poplar trail has meant that trail erosion has increased the severity of some of the features. The big final drop is still scary, but you have to just go for it or you can stare at it for ages. I know I have done just that!

I had hyped this trail up and I was relieved to see the smiles on the faces of those that hadn’t been here before. It was time for the Machen DH run next, more of the same steep switchbacks and twisty dusty trails that you would expect to find in the Alps. Culminating in the Garage Drop, not quite what it sounds like but still a big drop in nonetheless, and the railway jump. Only jumped by a few, the rest of us made our excuses and moved on to the Spar for a cold drink and rest in the shade. 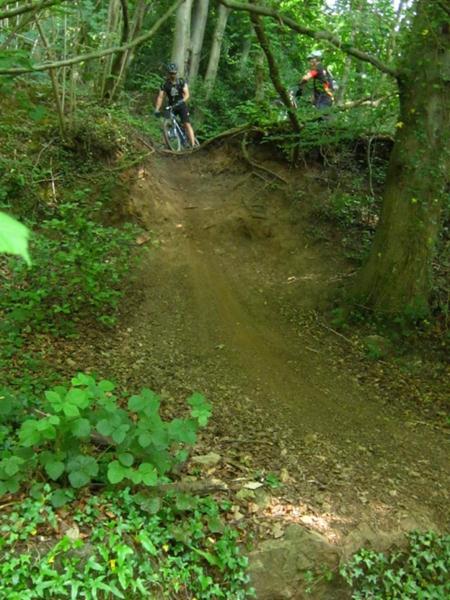 After our break we all voted to do a route in Draethen, which was a bit of singletrack, some more climbing and a great drop in with another drop at the bottom for good measure. The DH segment of this ride was a bit of a mess and we lost a couple of guys in the woods. Eventually we all made it to Lower Machen and then started the long climb up the road and the up the killer Turners Lane. This was a big road climb that took us back to the other side of Machen where we could then start the descent back down to, Wyllie.

This was hard work, by now we had done a fair chunk of the ride and it was over 30C. After a brief stop, for the stragglers like me and a longer rest for the fitter climbers we rode up some more and then dropped down to do Squirrel again, before our final run and the Wyllie DH.

This was a fast wooded section of DH with many options, we split into a few groups and eventually smiling and slightly relieved that this signalled the end of the ride, we met on the cycle path and then rode back to our meeting place at The Crown in Pontllanfraith.

Back at the pub, we packed our bikes and headed for the bar. A refreshing beer, cider or coke was in order and we all deserved it.

I’m going back in 3 weeks time, to do the Squirrel jumps and the train track jump! Or at least have another look at them… 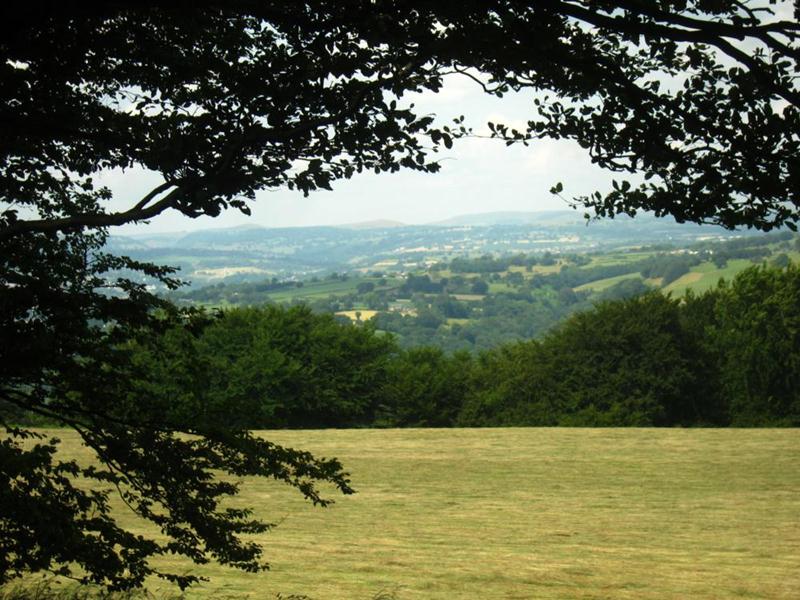