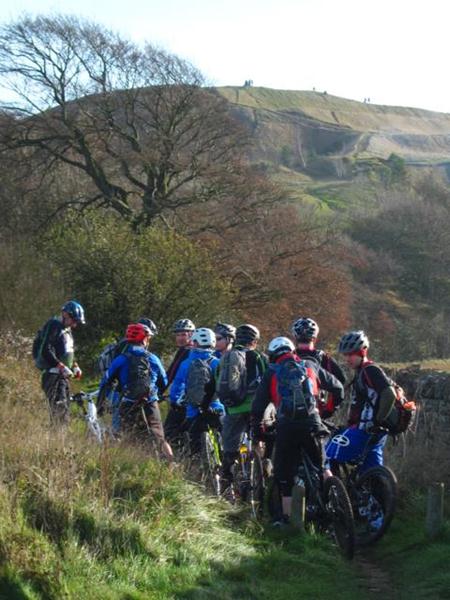 By Gary Palmer. Photos by Gary and MBTom.

The weather Gods are shining on me again what a cracking morning to be out on a bike, and being dry all week i knew this was going to be a fun ride

Twelve in the car park ready to go Jerome mentions that he has no back brake; we assure him that brakes aren’t needed on this ride and off we go.

The beauty of this ride (or not) is that you are straight into the woods for some nice twisty rooty single track. There was a bit of a problem with the leaves covering all the tracks, luckily no one knew where I was going either. Another problem with having a good covering of leaves is that you don’t know what’s under them, always give a nice soft landing though.

Bit of a rest at the top of a short hill then it was downhill all the way.

This bit of woodland has been ridden for years and there are a whole load of route options, luckily enough we managed to piece them together and end up where I wanted to, it’s on a good bank this bit so you can get some good speed up, get some air between the tyres over the track crossings and right at the end there is a right steep gnarly exit on to a track, everybody made it all with big smiles, phew.

This is where the downhill all the way finished and up we troughed up a long stony track, halfway up there is a quarry that sparked some interest, there was a promise to revisit after the ride. 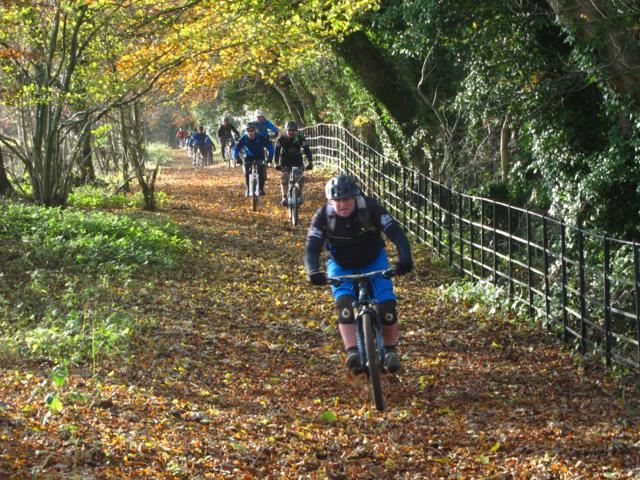 After the quarry the climb flattens out a bit and we made our way back to where we came from, well nearly. Out on to the road at Ruscombe to ride to the top of the hill again and to clear what little mud there was on the tyres. 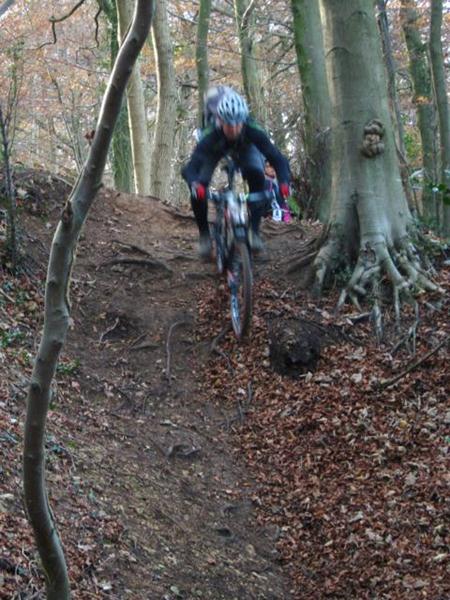 Back into Maitland’s wood at the top of the hill, this is one of my favourite bits of single track in the area, tight and twisty with some steep bits that can catch you out, there is one particular bomb hole in these woods that I mentioned to everyone before we took off, it’s just after a right hand turn and the bike in front of you just disappears, much fun had by all and fair play for everyone doing it.

We exited these woods on the edge of a village called Edge and made our way over to Painswick beacon on road.  You can see the Beacon and I have to admit it looks quite a daunting hill to climb. As we branched off the main road Tom mentioned a bridleway so we took it and a excellent addition to the ride it is, I was guilty of being over familiar to this ride and I hadn’t checked out the variations.

As we started the climb up to Painswick Beacon U decided to be my normal thoughtful self and stay at the back and make sure everyone got up there. When i got to the golf course they were all waiting for me so I turned right and kept on riding. This wasn’t the way the ride was supposed to  go but the view from the top of Painswick Beacon is worth any detour.

There was a chance that James Scott might be riding up from Cheltenham so Tom got on the phone and there he was with two mates: Mike Brazier and James’s mate James. They continued to join us on the rest of the ride and clocked up 66km in total for the day. We had a bit of an issue here with Rich’s tubeless tyre (still like tubeless) but it gave us time to have a muck about on some crazy steps on the end of the hill we were on. Puncture mended we took off, led the guys straight across the golf course, big thanks to the golfers there for their patience. 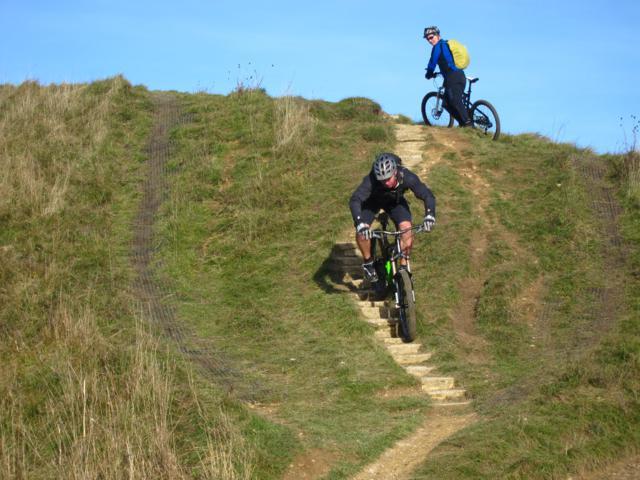 Back into the woods for a  bit more climbing and then down, some great features in here which caught some of us out, Nick had problems with contact between wedding gear and handlebars and luckily Rich landed on his feet after displaying some great air off the jump. A steep descent back out on to a track and then we started to head back to where we started, this involved covering some ground that we had already ridden on but not to worry Tom’s bridleway definitely felt different when climbing up the narrow single track.

Back in Edge and we climbed up to the point where we nearly fell out of the woods but turned right to go down Stockend, a nice fast road descent that suddenly turns into a track with a climb that feels steeper than it looks, quite a few walkers in this wood who seemed oblivious to the sound of bikers rattling through the leaves (Cotswold Way oops) they seemed alright about it though, bless. 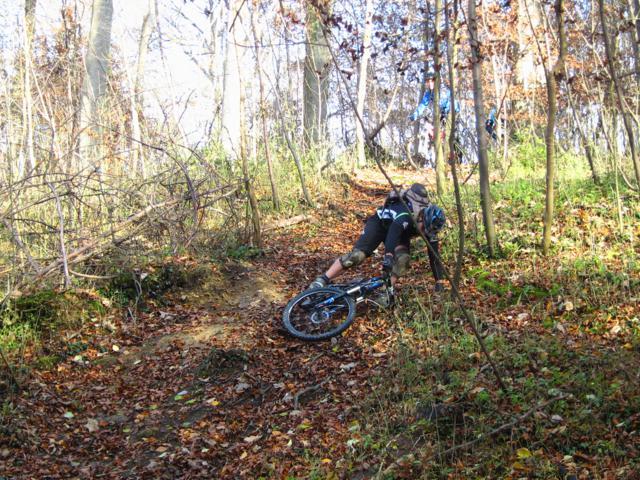 We were on the final stretch now, a quick warning of “don’t go past the cottages” and off we went.  I think there were some land speed records beaten down there, got to the cottages turned left  back on the Cotswold Way and made our way over to Chucky’s Farm ( have a look in the top window of the barn the next time you are over there). Then we turned left up Haresfield hill which is a bit of a handle bar in the face kinda climb, when we got to the top of this hill all the guys were in the field.  I relied on Tony’s years of experience and Tony and myself stayed on the road and we all met in the car park.

End of the ride all bar the crazy gang wanted to go back down to Standish quarry which we passed at the start of the ride, we took a short cut which totally spun my compass round but thanks to Phil’s inbuilt navigation system we were back on track and sat on top of a grassy mound ready to try some crazy lines out. I decided to put myself forward as camera man which meant I could wimp out of some of this stuff, still having flash backs of injuries received in  years gone by, great fun had by all and Phil MB Swindon’s stunt man made it look all too easy, I was almost tempted.