See the race report from Oktoberfest 2010. 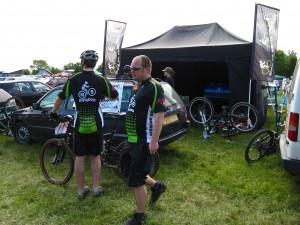 MBSwindon had two teams of four and one pair taking part in the Bristol Bikefest 2011.

Both teams got off to a good start with lap times below 32 minutes including the Les Mans start. The fast team did as well as 21st (out of approximately 90 teams) before problems with punctures put them into 29th by the end of the day. Still a good result considering how competitive the event was.

The slower team spent most of the day in the mid 50s, getting as high as 51st and finishing in 55th.

The pair ended in 7th place (out of 11) and had a dramatic finish when Kate crossed the line 30s before the end of the race.

Most importantly, everyone put in a great effort and did the best that they could.

Thanks to the supporters who helped us on the day.

Several new sections of trail were in place for the event on the quarry climb and descent. The new trail followed the same line as the old trail and replaced roots and rocks with berms and a smooth surface. The new descent was great. Some might miss the tricky roots and rocks of the old climb.

To keep up to date on Ashton Court then visit the Bristol Trails Group website.

Some photos from Jon Bessant of Dirt CC.