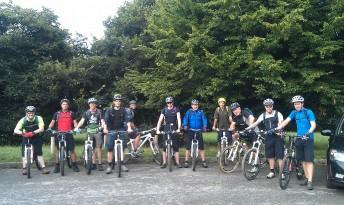 We left Croft at about 09:15, so just a minimum of faffing; we may well have broken Tim’s formula! We had twelve riders with bucket loads of experience and a sky that was not quite raining.

Andrew Weaver, the ride leader, had just come back from a couple of weeks in Cyprus and hadn’t turned a pedal for three weeks, so he took us straight up Ladder Lane! An easy enough climb if you’ve warmed up but I was certainly feeling it by the time I got to the tricky bit at the top, and I joined a few others pushing up the last bit.

We then did some road and bridleways (we went past the spot where my freehub seized on the Prospect marking out ride!) and eventually picked up the old train track to Marlborough. On the way we had passed several pairs of horses doing some kind of event. One took a serious dislike to my luminous green top and skittered right across the track about a foot from me. The rider did really well to stay on! 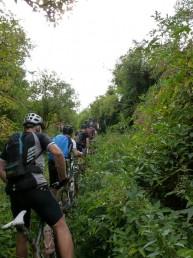 Considering we had twelve riders we managed a really good pace, not only along this section of cycle path, but for most of the ride.

From Marlborough we dropped down to West Woods and we hauled ourselves up most of the climb until we got to a suitable spot for a ten minute break, the same spot that we stopped at on Andrew’s previous epic ride. Andrew made the same offer of, ‘Hey, you can go and hoon around a bit on the down hill sections if you like,’ and got the same response… zero takers!

We had almost made it out of the West Woods when Andrew turned off and went back in, down a bit, up a bit, don’t forget to take the left turn… Oops! Ten of us made it to the exit point and waited for the last two. Andrew went back in and with the marvels of modern technology managed to repatriate the remaining two riders. I felt that is was slightly wrong that I could get a better phone signal in West Woods than I can in my own house! 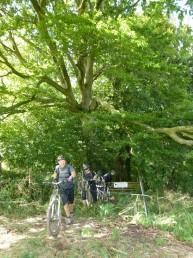 Out of the West Woods and through West Overton, we cut up the start of the Ridgeway and then off down some bridleways to Avebury where we hit the café. Some Ginger Beer, a Cappuccino and lovely piece of sticky Ginger cake for me – very nice. We loitered at the café for about 20 minutes or so and then headed off.

We headed along cycle paths and bridleways and headed north. We had an encounter with some electric fencing and Leon manned up and reconnected the electrical connection! We also came across some cows with big horns – some of them looking a bit feisty! (The fella in the red top was very nervous at this point!) 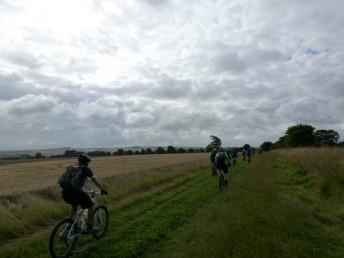 We hit the road in Wroughton at Clouts Wood and I think everyone enjoyed the roll down in to Wroughton. We cut through the back of Wroughton and came out near the Check Inn. A short bit of road later and we were back at Croft.
We were really lucky with the weather; it rained for about 5 minutes while we were at Avebury but we had sunshine for pretty much the rest of the ride.
Another cracking Andrew Weaver Epic! Time to start planning the next one!

OS Map of the route. GPX File of route, right-click and select “Save As” to save to your computer.