Friday afternoon, 5pm. Time to rush out of work, quickly fill my car full of all the cycling and camping paraphernalia I can find and head off to Bristol. Why? It’s time for Oktoberfest! 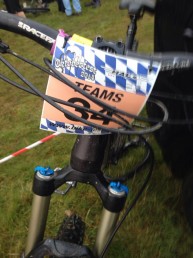 It was dark when finally I turned up after sitting in the Bristol traffic for what felt like eternity, but thankfully the amazing MB Swindon fairies had already set up the camp in a prime track-side location – perfect for encouraging (and heckling) passing riders. I stuck my head through the door and said hello to some familiar faces (and a few new ones) before quickly setting up my tent before it got too dark.

Once my accommodation was sorted and ready, I decided to set upon cooking my high energy pasta dinner in preparation for the racing. Then Phil Mayger returned from the Luff bus tent with a burger, which sounded like a much better idea. So with a burger in one hand and a cider in the other I sat down with the rest of the campers and chatted about bikes, the race to come and the usual excellent banter I’ve come to expect at an MBS event. After a few more bodies arrived and set up tents, we all decided it was pretty cold, and a sleeping bag would be a pretty good idea.

Come the morning, everyone was up bright and early to prepare for the day. Plenty of porridge, a quick change of front inner tube (I’d decided to leave home with a puncture already on my bike so I wouldn’t have to bother with having one during the race) and I was as ready as I was going to be, so I sat back and watched all of the professional looking race teams (and the gravity team) arrive and get ready. Talk was centred around the best tyres to use given the expected slippery conditions. Fortunately I only have one pair and they were already on the bike, so I didn’t have to worry about such trivial things as grip at this stage.

I’d been selected through process of elimination to start first for my team (with Pete R, Phil M and Pete T), so after the briefing I tucked my riding glasses into a pocket in preparation for the first competitive running I’d done since school sports day and cycled down to the start line. 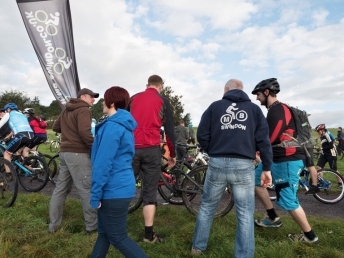 It seemed that no sooner had I pushed my way to the back of the great wall of competitors there was a call of “3… 2… 1… GO!” and chaos ensued. I realised that the flat soles on my shoes were not made for sprinting on damp grass so moved over the gravel fire road which was a much better surface until I was swarmed with bikes and riders attempting to get a quick getaway. Eventually I reached the MBS flag and jumped on my bike and we were finally racing! Sort of. After a slow moving peloton on the fire road up to the actual course, we all ended having to queue politely into the first corner for five minutes or so before we set off along the great single track at Ashton Court.

I’d never ridden round the course until this first lap, but it turns out to be a very decent and enjoyable route. After the nice queue I found myself at the back of a train of similarly paced people going into the first single track, so thought I’d use this first lap as an opportunity to learn the trail and find a good pace. About this time I also realised that I’d forgotten to put my glasses on after the sprint, and also that they were no longer in my pocket… ah well! To me the course seems to be four nice bits of mostly fun single track linked by four fire road climbs, with the last section being the highlight of the lap for me. A great rock garden decent with plenty of choice of line. I took it a bit steady this first time, but still had a great go down it.

One final effort up the last fire road climb brought me into the transition area where I handed off our relay baton (a pink hair tie..) to Pete R and finally I could catch my breath, eat a load of pasta, enjoy some of Kat’s brilliant cake and chat with people about how slippery it was out there. I found the two hours or so between my laps flew past, the highlight of the first stop being Phil Allum attaching a cowbell to his saddle for what seemed like a giggle, but could possibly have been a tactical master plan. 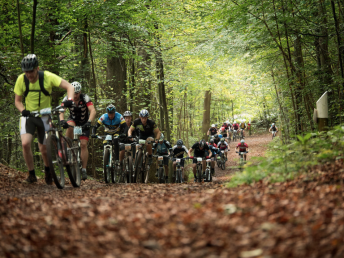 No sooner than it felt I’d come in it was time to take over from Pete T. Finally I had a chance to enjoy the single track with less traffic and give it my best. For me, being overtaken was the worst part – some people are more than happy to let you know they’re coming through and which side, though some decide to barge through and let you know when they’re riding level with you of their intent. Personally, I think that everyone should have a cowbell attached (BC rules?) as I heard Phil coming long before I saw him, and I had a great laugh hearing him in the distance round the rest of the lap! As I started the last climb before the rock garden, it was particularly nice to have the support of Gary, Anne-Marie and Phil cheering track side, giving me a boost up that last bit!

Into the rock garden and I gave it a bit more beans, having more confidence from the last lap, which was possibly misplaced. About halfway down I managed to punch a tree and it all went wrong from there. My bars spun round, the front wheel stopped but I kept on going down the rocks. Standing up, I had a lovely hole in my glove that I later realised kept on going into my hand, and a lovely series of cuts and grazes from my ankle up to mid thigh. After a moment to catch my breath I jumped back on to finish the last 5 minutes of the lap with plenty of adrenaline to help and handed the pink baton to Pete again. On my visit to the South West Ambulance service for some cleaning and bandages, I realised that the rock garden had been relatively kind to me when I saw someone already sat there with a torn lip and dripping nose (“I’m afraid you’ll need to go to A&E, we can’t stitch that… you need a face doctor”).

I hobbled back to MBS HQ to show off my fancy bandage leg wear and eat more lovely cake. At this point the clouds were darkening and heading toward us, just in time for my next lap. I may have had an excuse with my leg, but a test lap around the campsite told me it was probably fine, so I grabbed my raincoat, a spare pair of gloves and took a healthy dose of Rule 5 before heading back to the transition area for the last time. The start of the last lap felt good, and I’m sure that I made it through the first section faster than previously, but the weather had other plans about things. Shortly, the heavens opened and I quickly began to wish my glasses weren’t in a lost, trampled mess somewhere along the start line once the mud and water started spraying everywhere.

The trail got slippery, my hands got cold, but eventually the transition area came back into sight… just as the sun came out for the rest of the race! I handed the pink scrunchie off for last time, and realised that, with the amount of riding time left, I was done for the day. A quick shower, bike wash, celebratory cider and dumping of all my stuff in the boot of my car and then it was time to cheer the finishers home! 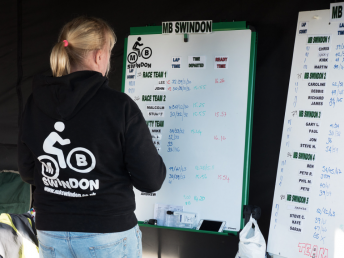 The end of the race was thrilling for MBS. With everyone standing on the corner where the final two climbs meet just before the finish, we cheered and screamed encouragement as the last few riders made their way back in the lead up to the 5pm finish. As laps had to be finished before 5pm to count, it was going to be tight for a few, and as the last came up the hill before the rock garden we knew it was going to be down to the wire for some! With one of race team pairs and Paul Broadrick crossing the line within seconds of them calling 5 o’clock nobody knew if the laps had counted or not (they had!).

With the racing over, there was enough time to cheer everyone that had made it onto the podium and have a good bit of banter about the day with everyone. For me then, packing up was finished and I made my way home, to a sofa, a takeaway and a film, before bed and a great night’s sleep.

All in all, another amazing MBS event I was happy to be a part of. A massive thanks to everyone there that helped, competed or was just friendly! The event itself was great fun with a good course, and I was personally very happy with how I did, but already looking to better that next time. I’ll definitely be back for Bikefest in the summer!