You can also read a report by MB Swindon’s XC Race Team and the  MB Swindon club report.

Twelve minutes into my first lap, none of those statements were on my lips, I can assure you of that. Words more to the tune of “never again” and “this must be 8km already”, among other expletives not to be repeated.

Those of you who know me will know that I’m not exactly enthused by pedalling. I love a good trail centre, but I see the pedalling as just a necessity to reach the incredible descents. Give me an uplift any day of the week. So why did I sign up to an 8 hour endurance race as part of a team of four in a city with “no mountains”? I think I was slightly misled by the title of “Oktoberfest”.

Having never ridden Ashton Court before, or been a part of an endurance race, never ridden SPD’s before, and on a borrowed bike, this was always going to be a recipe for an interesting day. Turning up just in time for registration, I was impressed by the setup of the venue, and even more so by the sheer efficiency of the MB Swindon camp!

As we were “not taking things too seriously”, I was fairly relaxed, unlike before the start of any Enduro races I have entered, which usually entail nervous wee followed by nervous wee. Wandering down to the start line to witness the ‘Le Mans’ style start, there was also a very chilled vibe, but then it happened…hordes of people, old, young, male, female, sprinting up hill, frantically scouting out their noble steeds to embark on their first lap. Big wheeled, small wheeled, fat wheeled, rigid, hard tail, full sus. This really was an event for everybody, regardless of age, experience or ability.

Not more than thirty minutes had passed and the fastest of the riders come charging back up the hill toward the start/finish line, and a buzz of excitement suddenly descended upon the transition area as everyone braceed for the changeover. Whooping and hollering welcomed back the exhausted starters. Amid the chaos the riders found their partners to switch the “baton” and without further ado, the number two riders sprinted off towards the woods.

“How was it, what’s it like?!” I excitedly asked Mike, as he gasped for air, querying how his time was. Given the avid racer Mike is, his slightly disappointed reaction to not being able to get the power down in the tight single track woods among the close-knit pack early was no surprise. It only led him to push even harder in his next laps to improve his time. 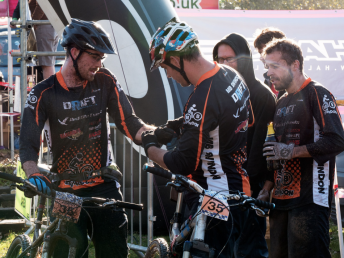 Thirty minutes later, James was saddled up, waiting for Phil to come charging over the sleepers towards us. Slick changeover complete, Phil caught his breath and described his lap…fast, wild, and slightly more spaced out than Mike had described.

Me next. I know how much Mike and Phil have put into it, and the anxiety is building. Nobody is coming to the transition area looking like it’s been a fun pootle around the woods.

Suddenly, there was James! Grab bike, switch over fanny pack with tools, take baton, GO!!! James was also breathing out of his behind, and it was at that point that I knew… I had to take this seriously – I wasn’t letting these boys down. This was no time to get used to a bike I’d never ridden before, no time to adjust to being locked into the SPD pedals, so I pedalled my legs as hard as I could, trusting my instincts on a blind course.

Psychologically, every person in front was my next victim. I was gradually gaining on them, waiting to pass at the perfect safe opportunity. 99% of the time this was a courteous ‘could i pass when it’s safe please…..on your right….’ and people happily obliged. Equally when stronger riders passed me on the climbs, I happily pulled to the side so as not to hinder their stride. Great spirit all round. I pedalled like never before back toward the finish line, and the lads spotted me, cheering my name and words of encouragement. I was a mess, my breathing erratic, my legs like jelly, and I missed the transition area. But no way was I going for another lap, so I slung the bike over my shoulder and hopped the fence into the transition area. Down on my knees, I was exhausted. That hurt. But I can’t wait for my next calling.

Back to ‘Camp MB Swindon’, where Kat and Sharon (to name but a few) were a well oiled machine, keeping track of 8(?) teams’ times; who is on track, when they are expected back. It really did take any stress out of the racing, so we could just focus on preparing for the next stint. This set up made a massive difference to the day over all. It really was great to see a community spirit, everyone taking an interest in others times, cheering each other on, giving words of encouragement when it was needed. (Special mention to Kat’s home made brownies. Athlete fuel right there!)

My second lap was slightly easier; I knew the course, had a feel for the bike, and there was a lot more space between riders. The track was bone dry and super grippy, confidence was oozing, and I’d had a 90 minute rest! All the boys in my team were continuing to give it their all – I was massively proud of them for keeping things so consistent.

The weather was almost perfect all day, and the track was riding extremely quickly until James’ third lap when the heavens opened, drenching the track, the riders and the spectators. Spirits were the only things that weren’t dampened.

James came back soaking wet and caked in mud, but still smiling; my turn next. The rain had subsided but there was a lot of standing water and I could’t see a thing. Grip stayed surprisingly high, despite the mud. We had worked out before my departure that I had to make another 35 minute lap in order for both Mike and Phil to fit in one more complete lap each before the timer stopped. No room for mistakes, no room for rest – the pressure was on. I didn’t have a watch so time was merely a perception – all I could do was put 100% into it. I had never been so glad to se a finish line. Transition complete, Mike raced off and that was it, there was nothing more I could do bar support my team mates and the rest of MB Swindon. I grabbed a hard-earned beer and headed over to the final climb to show support for all those still on track.

Mike and Phil both completed their full laps in excellent time; the pain and relief was all too apparent. In total we managed 14 complete laps in 7hrs 50 minutes, coming 11th in the team category. Not bad for a bunch of ‘enduro’ riders on 26” steel hardtails – certainly one of my more proud achievements. A super special mention to all those crazy, crazy people who entered in pairs and solo riders. Hats off to you lot – I’ll not be entering those categories in a hurry!

So, my opinion of Oktoberfest? I loved it. An excellent event, in a bloomin’ fun location (despite “no mountains”), with a competitive, but fun atmosphere with lots to see and do when you’re not in the saddle.

It was a laugh, it was a fun day out, and, although my competitive side took it seriously, it wash’t too serious. I hope to see you all there next year!