You can also read a report by MB Swindon’s Gravity Race Team and the MB Swindon club report.

The weather forecast for Saturday’s Oktoberfest MTB Race was not good: rain, rain, followed by more rain. When we arrived at 7am, things were starting to improve but the course was still pretty soggy. Tyres were changed and pressures were adjusted in an attempt to get as much grip as possible.

Stu and I raced in the ‘Old Gits Pairs’ category, whilst Lee and Speedy raced in the ‘Open Pairs’. Lee and I were to ride the first lap, which involved a running a start. Lee got great start and was in the top 10 into the start/finish area, while I was a few minutes behind. Lee’s good start meant he had a clean ride into the first bit of single track whereas I got stuck in traffic…note to self:  run faster at the start!! At the first change over, Lee was 4 minutes ahead.

Stu and I were riding 1 lap on, 1 lap off, but John and Lee decided to ride double laps – a risky strategy, but it was obviously working as the gap stayed at around 4 minutes. However, John punctured at the start of his second set of double laps so Lee had to ride again…meaning he rode 3 laps back to back.This put Stu and me marginally ahead. For the next few laps we stayed ahead but our lead was gradually being eaten into. 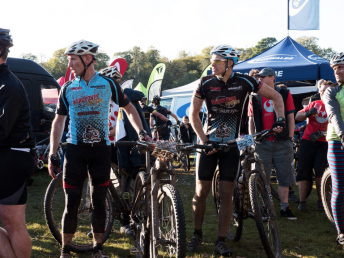 The race was to finish at 5pm. At 4:25, Lee and I went down to the transition area to wait for our respective partners. They had to get back by 4:30 for us to have any chance of finishing before the cut off at 5pm. Speedy appeared first at about 4:27 – through some superhuman effort he had overtaken Stu, who came through less than 2 minutes later. It was going to be close, very close.

I had a good run through the first bit of single track with no hold ups and then up past the hill where it had all started nearly 8 hours earlier. The course was drying out, which meant you could push it just that bit harder. About half way through the lap I caught sight of Lee, and when I managed to catch up with him at the next hill, I could see that he had had some kind of mechanical issue. I stayed on his wheel all through the single track. On the climb prior to the rock garden, we were neck and neck, and it was great to see and hear all the other MB Swindon Riders cheering us on. I knew that so long as I kept up with Lee through the Rock garden, I might have some chance of getting past him on the last straight. I glanced at my watch: 4:58. It was now or never! I dug in deep and overtook Lee and went for the finish. I finished with 2 seconds spare. Sadly Lee missed the cut off by 5 seconds.

OK, we didn’t make it to the Podium, but to be honest I don’t care – we had a great 8 hours of racing.

A big thank you to Sharon and Kat for keeping us all up to date with times. It was great to see the Gravity team; I was especially impressed by their lap times considering they were fuelling themselves on a volatile cocktail of cider and energy drink. Graham and Chris chose not to race but instead had cycled to the event from Swindon…good effort.

And finally thanks to High 5, Fibrax and Hargroves, without their continued support we wouldn’t be able to push our boundaries to achieve our goals and more – a big thank you!!!