This was a club trip to the Brechfa trails (Trail guide).

A few people visited the Cily Cwm trail (at Cwm Rhaeadr ) on the Saturday afternoon. Video of Cily Cwm. 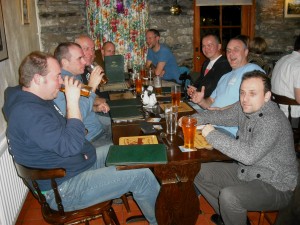 The main group met up at the Gilfach Wen bunkbarn (www.brechfa-bunkhouse.com). We were really impressed with the bunk barn. Spacious, well equiped, recently refurbished and ideal for muddy bikers. All for £15 per person too.

We had a monster meal at the Plough Inn at Felingwm (Carmarthen Dyfed SA32 7PR 01267 290 019). There was no messing about with the portion sizes. Most of us had a pudding too – their Bailey’s Irish cream cheesecake was a winner.

Back at the bunk barn we carried on with the preparation work (drinking) and had a table football session. 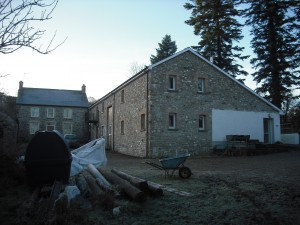 The day started with a full fried Brechfast which was cooked by Chris. He got up an hour earlier than the rest of us. That’s dedication.

We met at the Drop Off cafe bus car park for 10am. Google map marker of start location. By this point we’d done a lot of eating and drinking and no riding.

We got going at 10:30am. We encountered some ice on the main track climb. There was some confusion as to which sections were closed and which were open. We discovered that there’s some work being done the first big descent – it’s being dug out and surfaced.

When we hit the first fast section we were limited by patches of ice on the trail. There were plenty of tumbles on the steep section coming down the fire road. The track was a sheet of ice too. 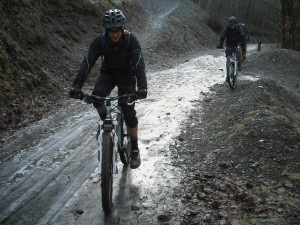 We managed to ride most of the ice by using the edge of the track. We took the blue climb to the top of the valley and then joined back onto the black trail. The best riding was at the top of the black route. First along the wall and then a fast section through the trees.

When we reached the point where the Abergorlech and Raven routes meet we had a bit of a dilemma. We didn’t know how much ice would be present on the Abergorlech descent. In the end we decided to chance it. The top sections were fine, a bit of ice was present in the middle but the last 10m was solid ice. Walking over the footbridge and up to the main track was a major challenge because that was all ice too.

We had another dilemma at the start of the Abergorlech route. All we could see was ice and we didn’t know what the rest of the trail would be like. Again we decided to give it a go. After about 30m the ice eased off and we could ride as normal. 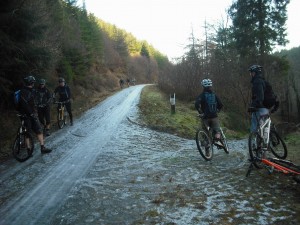 The outward trail on the east side of the valley was fine to ride. The  descent at the end was a tad slippery but could still be ridden quite quickly. At the bottom the tracks were completely iced up. We decided to take a short cut along the track to save some time. This was solid ice all of the way. As we approached the other side of the valley we found that the trail was also totally iced up. So we ended up with a winter walk.

It was mid afternoon by now and we decided to escape to the road at Abergorlech and follow it back to the car park. Escaping took over an hour on fire road, all of it iced up. Even basic maneouvres became quite risky with these conditions. It’s amazing what you can ride a bike over but there’s an ever present risk of taking a tumble and ice is a hard surface to fall onto.

We made it back to the car park before dark. We covered about 32km compared to our original plan of 50km. We plan on returning in the spring to do the whole thing. Google map of the route we did.

The owner of the bunk barn kindly offered to let us go back for a shower after the ride.

More information about the Brechfa trails.