Ride report by Chris Hopkinson, who apologises for the lack of photos but it was apparently far too wet to keep stopping and getting the camera out! Librbary photos used.

I’d cleaned and lubed the bike and got all my kit ready in piles by the front door on Saturday night, so when Gary arrived at 8am on the dot I was all ready to go. A quick stop at Leigh Delamere for coffee and Lucozade and we were Afan bound. The weather was looking pretty good although heavy rain had been forecast and when we got there it was cloudy but quite bright and a little on the chilly side. After the usual pre-ride-faffing we set off at about 10.20.

The infamous White’s level ascent claimed its fair share of tired, christmas legs and even saw queen of the uphill Anna off the bike and pushing up one section (although she later identified an over-tight rear QR skewer meant she’d been pedalling twice as hard as everyone else). Some puffing and panting later and we were at the top where the weather had turned and was now starting to do exactly what the previous nights weather report had promised. Simon’s decision not to bring anything remotely waterproof with him both baffled and amused the rest of the group in equal measures. Windy Point was exactly what it said on the tin, windy and pointy, (well the wind was blowing so hard it made the rain feel pointy) but still a very enjoyable ride and one of my favourite sections. 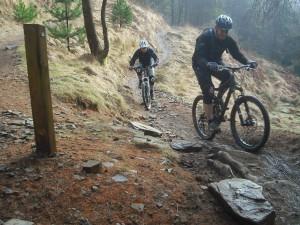 A slight eyesight malfunction saw several riders miss a right turn and we were briefly split into two groups. Reunited shortly later we found ourselves surrounded by cloud and getting wetter with every pedal stroke, although the riding continued to be fun. On reaching the Bryn Bettwys lodge we were looking like 11 drowned rats and the unaminous decision to stop for tea/coffee/hot chocolate/butties was made. My new sealskinz “waterproof” gloves were as wet on the inside as they were on the outside and I’d ripped my shorts so badly it looked like I was wearing a skirt!

Several dirtied mugs and a few crumpets later we started wondering wether we’d complete The W2 route in these conditions, it was agreed we’d continue along the route down to the low level path and where W2 headed up the mountain again we’d make a decision. I offered Simon my spare, dry (but still not waterproof) top which he gratefully accepted, fished out my spare gloves and off we went again. 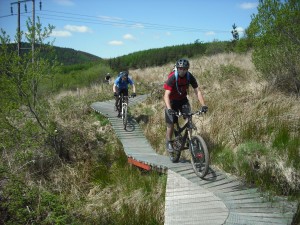 The weather had worsened if anything and setting off to ride in wet, cold gear is never enjoyable but it didn’t take long to get warmed up. A very fast and extremely fun descent down the Zig Zags section saw 2 or 3 sets of brake pads absolutely shredded. Andy had worn his pads so badly he’d had a coming together of piston and rotor and was unable to continue, luckily for him 2 rangers in a van were stopped at the same point and kindly gave him a lift with his bike to the visitor centre. With Pete’s front brake in such a state he had to continue with only his rear working and some of the group with barely working brakes our big decision had been made for us, a ride along the low level path back to Glyncorrwyg it was to be.

Back at the centre a hot shower was £1 well spent. A quick look around the bike shop saw me narrowly avoid a pair of overpriced shorts and Simon get as far as getting his wallet out before finally deciding not to buy a shiny new Orange R8. Most of the group opted to head home straight away but Gary, Simon, Anna and myself decided to boost the local economy by buying some beer in a local hostelry followed by a visit to Agni, a local curry house which is very quickly becoming MBSwindon’s indian restaurant of choice when down at Afan.

All told it had been a fun day, we’d all got very wet and it was a shame we didn’t manage to complete W2 but the trails of Afan are still some of the best, most fun riding in Britain and I’m sure we’ll get the chance to do it again very soon