This was the first ride organised under the heading “Novice Plus”. The idea behind this is to offer a slightly longer distance but still  with the novice-friendly ethos.

This was also the first ride that I’d lead and in total 16 people met at Barbury Castle on a grey but reasonably warm day. It was alleged that it would brighten up later. 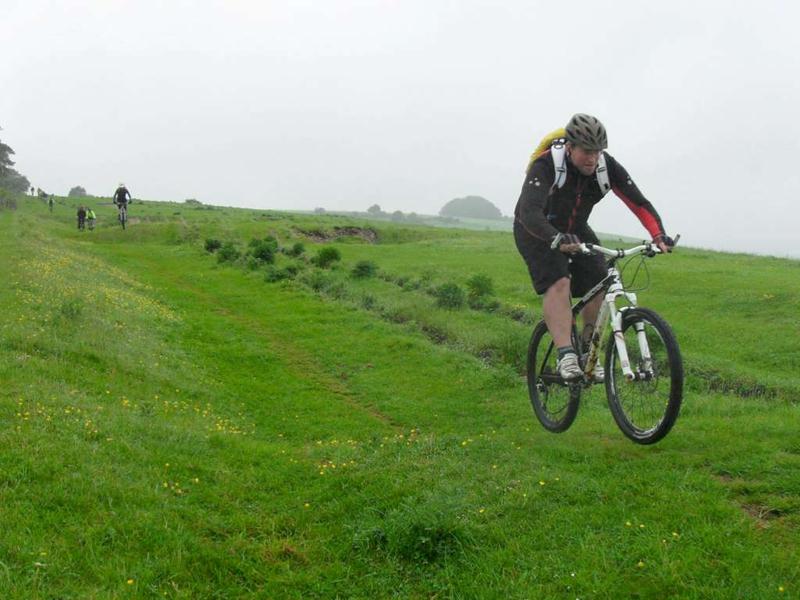 We set off at 10.15am on our 20ish mile journey. We started by heading back down the approach road and turning right onto the “shooting school run”. We followed this along the top of the fields and then down gypsy lane and continuing until we met the Marlborough road. After crossing this we then started the long slog up the hill on the other side.

As we re-grouped at the reservoir on the top I pointed out that this was the only real hard part of the ride. In theory it was all plain sailing from this point on (I was to be proved wrong later). 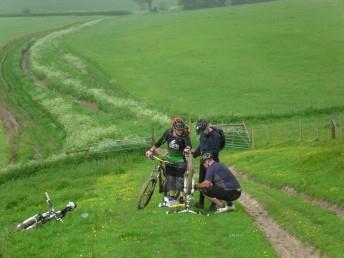 Once the heart rates were back to normal then we continued at a relaxed pace  along the Ridgeway and then the “Aldbourne circular route”, all the while taking in the amazing  views which we are blessed with.

At this point we had a small mechanical breakdown; nothing serious. A  front mech had somehow moved itself around and wouldn’t work (must have been the mystical powers of the Ridgeway because it was too tight to twist back). Out with the multi tool and we were soon back in business.

The original plan was  to cross the road and follow the edge of the fields up the climb to the copse on Sugar Hill. Unfortunately when we’d ridden it the day before the grass had been about a metre long and the track could not be seen. So we turned right along the Aldbourne road and then climbed up another rather steep, chalky and rutty hill at which point we had our second breakdown. Luckily Kristian was  back-marker and help sort the broken chain.

We followed a nice easy, although slightly wet ride through the grass before the fun descent into Aldbourne. Once everyone was fed and watered we carried on out of the village up a gentle(?) climb before joining part of the route used on the “Prospect Ride”. This was a fast (if you wanted) descent down a stony track. Sharon “B’s” medic duties were required as Nick had decided to make an unscheduled dismount. However, Gary Palmer who was behind him made the split second decision to bail out off of his bike into stinging nettles. Because of this Gary gets the “man of the match “ award because it was a very noble thing to do. I’m glad to say that Nick was ok other than a grazed arm and sore ribs.

Our next feature was the “rickety bridge” descent. Here we stopped for  a  quick briefing for those who had never ridden or even heard of it. It’s not a really bad route it just pays to be cautious if you’ve not been down it before.

After that we carried on our merry way on the climb up  the lane from Ogbourne Maizey. At this point it started to rain quite hard. It didn’t last long though. We carried on towards four mile clump and then finally back to the car park at Barbury where it all began.

This was the first “Novice Plus” ride the club had  organised. I hope everyone enjoyed it as much as they appeared to. I know I did. Here’s to the next one, cheers,  Nigel.