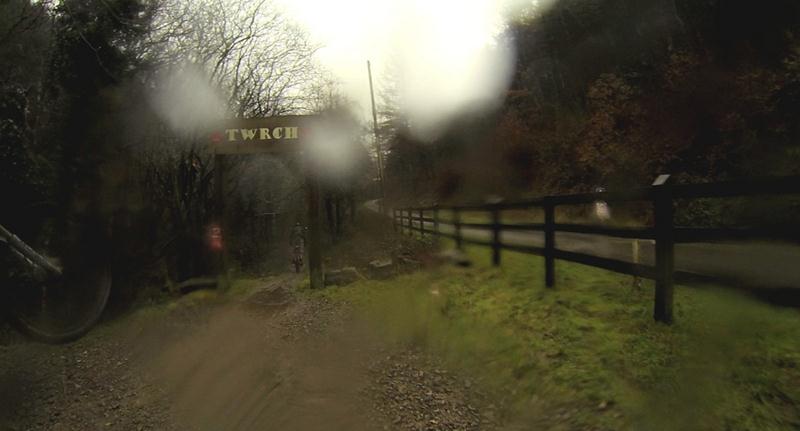 Why does it always rain on me when I ride in Wales? Well that isn’t quite true but all but one of the MBSwindon rides I have been on to Wales have been wet. Someone is only happy when it rains and must do a rain dance before every trip. Maybe it’s because I haven’t ridden with MB Swindon in the summer to Wales, but on the morning of every Welsh club ride so far I woken up, early usually, looked out of the window and think “hmm, its raining again”. But I still get out there and ride. 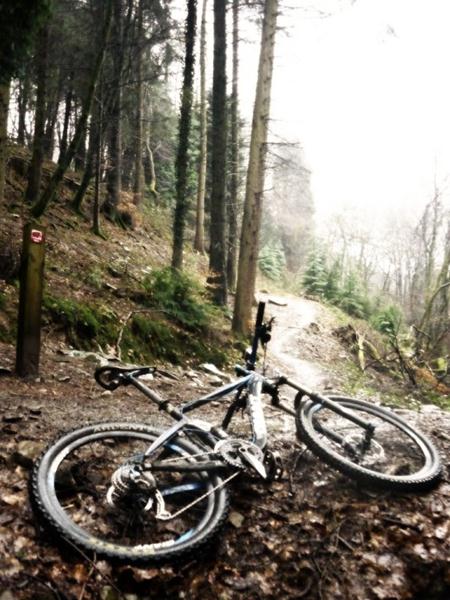 Fifteen MBSwindon club members left their cosy homes for one more rainy day riding this winter, this time on Andrew’s Cwmcarn Odyssey. As I pulled into the car park scanning for familiar cars and faces, I turned the music down and listened to the rain on the roof for a few minutes. What was I doing here? Gradually we emerged from the shelter of our various vehicles, standing in the rain fixing front wheels to bikes and getting ready for what Cwmcarn’s Twrch Trail had in store for us. As we  gathered in the car park preparing ourselves for the inevitable soaking we were about to get, Andrew Weaver said “Its raining men, but lets just get on with it!”. So let it rain, MB Swindon won’t be stopped riding no matter what the weather, though I think I heard John Speed ask if someone had an umbrella!

The climb begins immediately from the car park and is an instant reminder of what is in store for those that have ridden Cwmcarn before. The climb is technical and goes on for a few miles, but even with the heavy rain and poor visibility its very pretty. Bright green grass and moss contrasting with glistening rock and roots, among endless trees. This would have made for some great pictures. The club has a number of keen photographers and we had our fair share of GoPro cameras with us, but the rain meant that lenses were covered in droplets which blurred and distorted most of the pictures anyone tried to take.

But we came here to ride and ride we did. Like riders on the storm we pushed on up the hillside; up the taxing climb that in places requires more than a little bit of technical ability. A pedal uphill would be a work out enough, but add some rain to make it slippery and lots of obstacles and you have a test of will and skill on your hands. The climb necessitates you picking the correct line between rocks and stumps whilst also putting your step climbing ability into practice. Front and rear wheel lifts being a key skill required for a climb such as this and you find yourself constantly lifting and hopping the bike over all shapes and sizes. The locals ride this in reverse (out of hours or course) – so imagine what this is like to climb if its that much fun to come down! 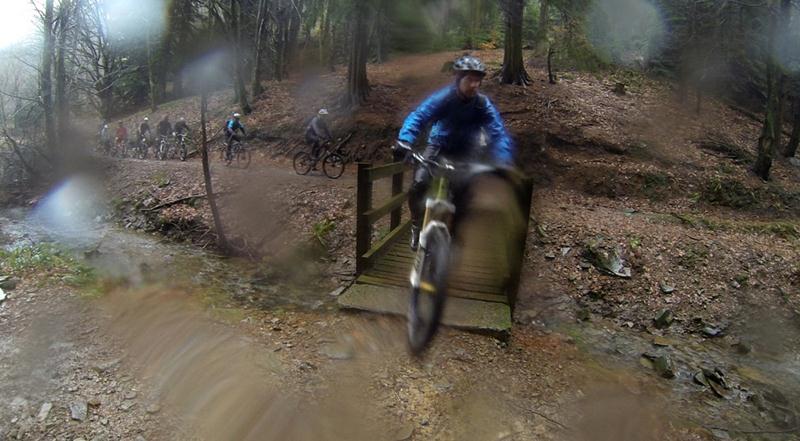 The trails at Cwmcarn drain really well so apart from the isolated place, there is actually very little mud or standing water. No rain will shut this trail down however what the rain does do is wash away loose earth and smaller stones revealing and loosening more rocks and exposing more slippery roots. With 15 riders and the awful weather the trail was always going to take longer than usual. A few stoppages for minor technical adjustments, breath catching and for the odd push rather than ride meant that the climb seemed endless. The spirits remained high but as the token Welshman in the group I still resisted singing in the rain, even when prompted at one point by some joker stating “raindrops keep falling on my head”! 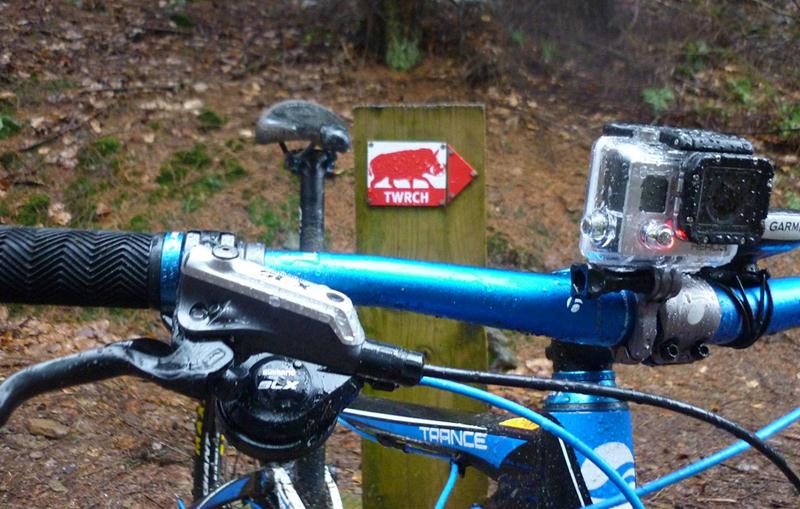 The reward for the climb is the superb freeride section at the top of the trail. Starting off among the pine trees you are presented with the first man made elements of the Twrch Trail. The climb is all about natural trail features, rocks and roots etc but now you get to ride berms and table tops in a really great section for those who like to ride fast or get some air. After a couple of loops of this we headed back down the other side of the mountain for what is now mostly down hill back to the car park. The descent is a fantastic singletrack experience with some small sections to climb and all named as is the way with trail centres today. We passed two old bearded guys standing on the entrance to Gate Keepers (that was a missed photo opportunity), and then we rode on for an exhilarating finish through Castle Valley and Dragon’s Tongue.  I think I heard someone crying in the rain at one point but they were cries of joy and excitement I am sure! 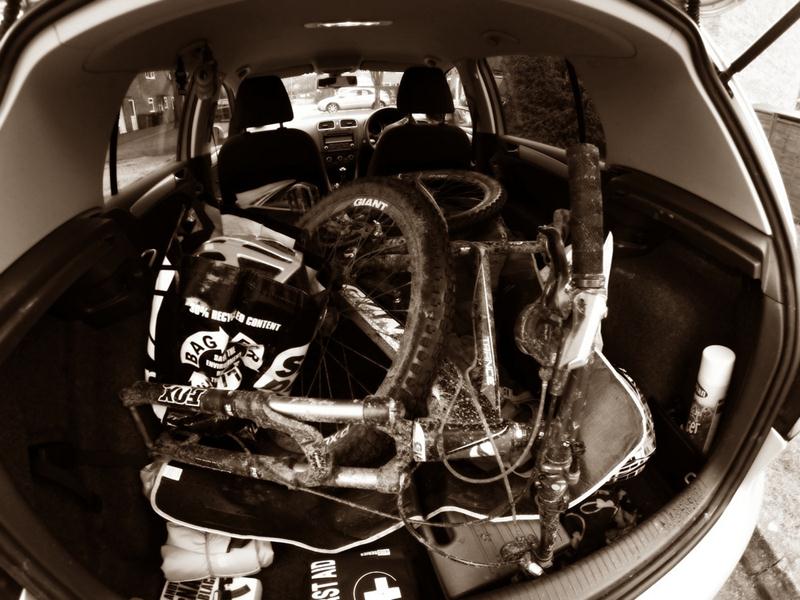 After more than 2 hours (it felt much longer) we returned to the car park, very wet and beginning to get cold as the waterproofs had begun to keep the water in rather than out. The usual “did you see”, “my brakes are shot”, “that was awesome” moment followed as there was a brief recollection of the ride before we all undertook the next task of packing away wet gear and changing into dry clothes. There is always a small risk that you will be left standing naked in the rain as you drop a towel or worse you stumble as you try to negotiate your way into a clean pair of socks during this process; but eventually the car door shuts the engine roars and the music kicks in and you can begin your journey home. Though its not over just yet – an hour or so later you have to get the rain soaked and mud splattered clothes and bike out of the car and somehow cleaned. Its all worth it though..

Its now Monday and I am sitting at my desk, just finishing up this ride report, and I find myself staring out of the window, while its still raining, still dreaming of dry trails and the summer months ahead. I hope you enjoyed the ride if you came yesterday, and if you didn’t come on the ride I hope you enjoyed reading my account of the day. An MB Swindon ride can be a hard slog up a mountain, across a moor or even round and round in circles but we have fun, no one gets left behind and if the weather is nice we don’t get quite so wet.