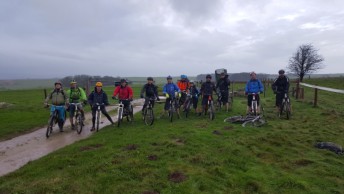 I had decided to lead this year’s Christmas recovery ride in December.  I had then hoped for a crisp winters day.  On the morning of the ride, looking out of the window at the murk and the drizzle the thought “do I have to lead this ride?” sprang to mind.  I reminded myself that there is no such thing as bad weather just poor clothing and loaded the car in the rain.

I arrived at Barbury at 9:30am.  The only other soul there was Ben who was in the process of unloading his cyclo cross bike from his car.  Ben explained that he had turned up early so that he could fix a puncture in one of his tyres before the ride.  As Ben set to work a steady stream of riders and cars arrived.  Eventually there were 15 of us setting up bike and swapping stories.  As the off approached there was the unmistakable sound of a tyre going down.  A forlorn looking Ben explained that he his repair efforts hadn’t worked.  No one had an inner tube to fit a cyclo cross bike so we tried gaffer taping the tube, but that failed. As Ben loaded his bike back into his car I started the ride brief.

We headed along the Ridgeway to Hackpen.  As always with these novice rides the range of fitness and speeds in the group varied.  We had plenty of stops to let the riders at the back of the group catch up and get their breath back.  Normally from here I would take the track off the Ridgeway through Totterdown Woods.  Given the rain the we have had I knew that this would be a complete mud bath, so we carried on along the Ridgeway to a heavily rutted section.  I had warned the other riders that this bit would be hard going.  Knowing my track record for coming a cropper at this section I let everyone ride at their own pace (telling them to regroup at the obvious cross roads on the Ridgeway).  I could hear various yelps and giggles ahead as riders slipped and fell off into the soft mud ahead.  I confirmed that 5-10 shoes are useless as walking shoes in the mud by nearly slipping over without being on the bike. Eventually I caught the rest of the group up (not sure that the ride leader is supposed to be last, but that just shows how well everyone else rode that section).  I was greeted by lots of smiling faces so I think most enjoyed that section of the ride.

We turned off the Ridgeway to head across Fyfield Down.  After we briefly paused for me to take some pics of the group we took the double track descent toward Rockley.  I had explained that there is a sneaky bit of single track at Rockley, but that it would be muddy.  A few took that option while the remainder of us too the main track down.

Now all that remained was the long steady climb back up to Barbury via Four Mile Clump.  With no real possibility of getting lost I gave the faster riders in the group their head and let them go back at their pace.  The rest of us followed on behind at our own pace with Phil Allum doing the back marker duties.

I arrived back at Barbury covered in mud, but happy.  It had been cracking ride with great company.  Judging by the comments at the end of the ride a lot of the riders thought so too.  So did I have to lead that ride?  Probably not, but I am very glad I did 🙂