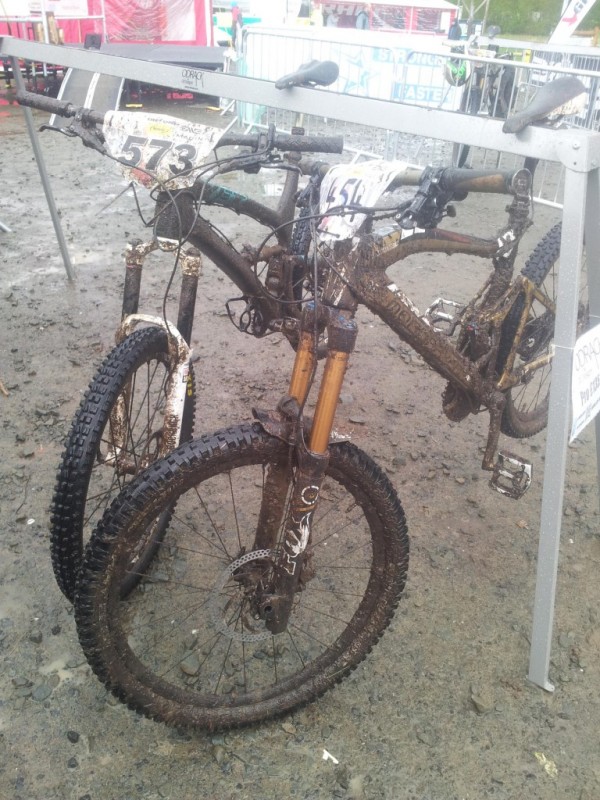 MBSwindon’s Gravity team have been back in action, this time in Scotland! Here’s captain James Scott‘s report:

First UK Gravity Enduro round for me this year and I’d been looking forward to it all winter. Innerleithen, regarded by some as the home of DH in the UK, has national level DH tracks scattered across the steep hillside and when the course map came out the week before I knew it was going to be wild. Missing was the pedally stage from last year and there were at least 3 tracks descending the main hillside – definitely packing the full face for this one.

Arrived late Thursday and got into my sleeping bag at midnight, enjoyed the luxury of a tent this year compared to the back of my estate car last year. Woke up not nice and early Thursday and after mooching around the event village seeing organisers still setting up we got out on the trails by 11. With a lack of transition signage we just pushed up the main hill and soon spotted the different course tapes signifying the different stages.

Up to the start of the stage 5/seeding trail and within 100m we realised this might not be the gentlest start to the weekend – super steep fresh cut track meant you were right over the back of the bike, add in a right angled turn and you knew some were going to struggle with it. Down to the first fireroad crossing and adrenaline was definitely pumping round the body! It continued in much the same vein – a proper DH track including a rock drop/road gap, high speed bus stops and big floaty jumps. After seeing the course map I’d decided to ride up with both open and full face helmets, using the open for the climbs and full face for the stages – I continued this one for the rest of the weekend, I wasn’t taking chances on these trails.

A quick run-down of the other stages: Stage 1 another DH track, chopping and changing between fresh cut and well ridden tracks. Stage 2 was a concern of many – lots of greasy roots and rocks to swipe your wheels away and difficult to maintain speed, it continued onto a trail centre descent for some fast flowing corners. Stage 3 was a repeat from last year and my personal nemesis – more greasy roots and rocks and almost every run down I was chucked off the bike due to sliding wheels, the second half was tight singletrack through “Christmas trees” and superb fun. Stage 4 was again more DH, started with a fast straight with small jumps, into solid man made berms and then a steep tricky DH track. The transitions were a mix of gentle fireroad climbs, DH push-up tracks and a few annoying climbs that were right between pushing and riding gradient. With 3 days of 1300m climbing per day, wanting to save leg energy for the race and relaxed transition times re was far more walking up climbs than riding.

Saturday practice and with stage 3 being potluck as to whether you could stay rubber side down the focus for many were on the DH stages. It was now that I felt really grateful for arriving for Friday as after a few runs I was far more confident on the steep terrain and able to carry a decent speed, knew the major lines on each stage and could just have fun on the tracks. On that subject, I’ve ridden spd pedals for the last year to get the extra pedalling efficiencies but what with all the wet roots and lack of mid-stage sprints I swapped back to flat pedals to see how I got on. Instantly felt more comfortable on the steep and technical tracks and was happy to go faster and get wild, letting the rear wheel drift more often and keeping the front wheel on track. Most fun I’ve had in a long time. Seeding on Saturday afternoon and I was feeling good, knew the track and lines to take and flat pedals just raised the confidence. After a 20 minute course hold for a red flag (rider was ok, badly winded I believe) I set off and caught my 20 second man within about 15 seconds – as soon as we hit the steep stuff. 10 metres further down the track and I passed my 40 second man… I passed another rider after the first fireroad and had to take a riskier line that I’m glad I’d tried in practice. Further down the track onto the flowier [Is that a word? – Ed.] trails and I caught sight of another two riders taking the easier line round the rock drop, taking the faster line with the drop meant I caught them up quickly and was soon able to pass. All in all 33rd with a 4:41, I was sure I’d gone quicker but think passing the slower riders had slowed me down.

Preparation for Sunday was fairly minimal, with all the steep terrain and wet weather due I upgraded to my new Fibrax brake pads and thank god I did, the combination of mud and steep brake dragging hillsides meant they got a good workout.

I was out from the arena by 10am but after the first 5 minutes of the climb the rain descended… First stage and there was mud and spray everywhere, usually I’d be very cautious with the spds but for once I had no concerns and could dab a foot whenever I needed – very glad I made that choice. Goggles on the other hand were almost useless, they did stop mud getting in the eyes but I was almost blind by the stage end! Also at this point I must apologise to the sponsors that were once visible on the shirt, one stage done and I was covered head to toe in mud! Stage 2 had a quick dismount after a root moved my front wheel a metre to the left, I also took this chance to take off the goggles which were only hampering my vision. Stage 3 and for the first time ever I cleared the rock section without issue! Stage 4 was great fun and there was a lot of grip available on the wet dirt. Stage 5 again and a clean run this time gave a 4:44 despite the mud and obscured goggles.

Unfortunately due to a bad injury to one of the masters racers (broken C1 vertebra – glad you seem to be on the mend already and hope you heal soon!) there was another red flag on stage 5 and this stage was removed from the overall times – shame I could have gained another few places with that run!

So 34th out of the 109 that started seeding and I’m pretty happy with that, more lessons learnt with the wet weather riding and a great shame to leave Innerleithen. The trails were absolutely superb and so much fun – can’t wait to get back there again, just wish I was doing the EWS!

Big thanks to Fibrax – the pads were superb and to High5 Energy – 90km and 4000m climbing means a lot of expenditure but the body still felt ready come race time.

Thanks also to Drift Riding, Hargroves, Red Kite Events and Mike Buss for their additional support.