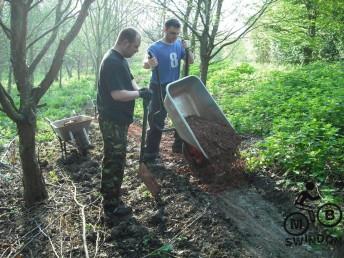 I’ve just got back from an absolute epic day. I was on my own for the first few hours and after a slow start I must have shifted around 25 loads of gravel on my own, giving about 60m of trail. Then Alan turned up, followed a bit later by Phil. The three of us made massive progress surfacing the North side trail. Alan’s wife then turned up with loads of food and cranked up the bbq. This was followed a bit later by cider and ice creams. We worked late in the evening, sufacing the new roller coaster berm too. Finally Phil and myself tipped some gravel on the entrance to the North side.

We’re going for another big one tomorrow.