Words and Photos by Gary Palmer

The weather in the week previous to this ride had been – to say the least – a tad wet, so i knew the ride’s title was spot on. However, the sun was shining beautifully on the day.

The car park was packed. What are those dog walkers like – didn’t they know that MB Swindon was coming to the woods to play?

Twelve brave souls gathered in the car park including Nik, who had already done a big ol’ climb up from Gloucester. A quick briefing and we were off!

The tracks in these woods are well used by mountain bikers so all the roots are well exposed and polished like a piece of fine furniture (with a splattering of mud in-between!) This was going to be interesting but, to be fair, everyone was coping.

The trails in Standish woods are great and you get the feeling that they are going to go on forever. But guess what? tThey don’t… and after surviving a steep decent on to a track we started to winch ourselves back up the hill. I stayed at the back, just to make sure everybody made it up the hill alright 😉 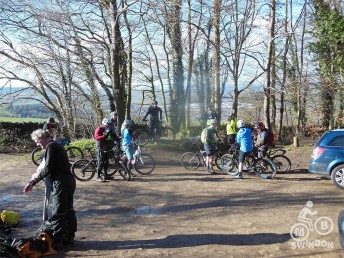 We exited Randwick Woods on to the road and stopped for a bit of tinkering with the bikes. It was a good job we did, as we actually picked up another rider, Tom Benge had arrived late and decided to chase us down. Fair play, Tom – good tracking skills!

Next it was up the hill to Stockend woods. When it is dry, this is one of my favourite trails – fast flowing, tight through the trees, nice bomb hole ,etc. Everyone survived the bomb hole; I might have bigged it up a bit too much!

Off we went to take the steady climb, mostly on road, over to Painswick Beacon. We stopped half way for a bite to eat, which is always welcome, then we started the off road climb up to the Beacon. It’s a bit of a tester for me, this one, so by the time I got to the top everyone was there and well rested. 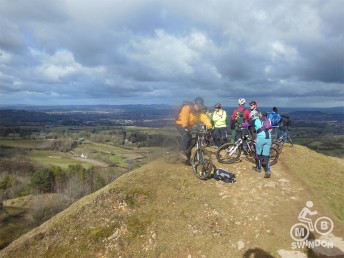 Due to the time it had taken me to get to the top, the Crazy Twins – Gary Lee and Graham – had hatched a plan to ride down the steepest part of the Beacon. They were both perched on the edge waiting to see who would go first. 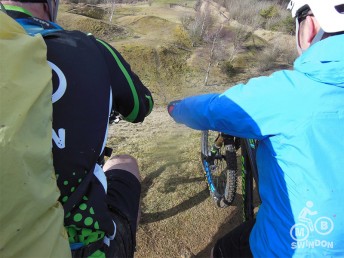 All of a sudden Gary was off! This was one of the funniest bits of riding I’ve seen in a long time – how he stayed on was a miracle! Then Graham went. Again, that was impressive, until he got near the bottom and then… boom, off he came! It did look nasty, that one, but he’s young(ish) and he bounced and survived with a good scratch to the leg, which our very own nurse Rich Ford attended to.

After a bit of straightening to Graham’s bike, we set off to ride the section that I had got lost on the previous night, down the steps on the end of the Beacon, across the golf course (dodging the golf balls) and into the woods for a bit more single track and bomb holes.

We crossed the A46 and went into Cranham woods – another tasty climb which i decided to lead from the rear. Again, everyone was waiting patiently at the top. This section of track is known locally as the Wall, and after a few scare stories we were off. Halfway down there is a tasty little off camber drop which has claimed a few riders over the years, but everyone made it down, although Mr Scott showed us a few break-dancing skills on the way down.

And so we found ourselves homeward bound, back across the A46 and into Buckholt Woods.We faced a right gnarly climb up onto the top – where the weather decided to dump a load of hail stones on us – and then some more tight single track with a tight bomb hole, and a steep slippery decent back down on to a track. This part of the ride is wet and muddy even in the summer, so i knew it was going to be treacherous now. Man, what a slog through the mud that was!

A quick bike wash at the farm for some and then we started the long slow climb back to where we started. We turned right off the main road to go down Stockend Road, into Stockend Woods and we followed the Cotswold Way over to Haresfield Road to finish off with a road climb that is steeper than a steep thing back to the car park.

A big thanks to you all for coming it was great fun, and Hazel – the flapjack was amazing!