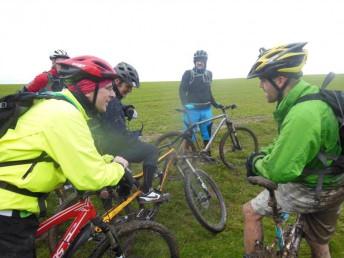 I rode a version of this route last year with the club.  I enjoyed the route so much that I rode it a few times on my own and made a few tweaks of my own.  When I set a date for the ride I hoped for a crisp winter’s day with the burger van (that had been in Aldbourne every Saturday that I rode through it) acting as a mid-ride reward to the carnivores amongst us (I’ve been a vegetarian for 23 years).  When the heavy rain fell in December I feared that the route would be unrideable.  A recce ride with Simon and Rafe found the route to be in surprisingly good condition.

Despite rain during the week and a forecast for more rain on the day I pulled into the car park to find riders assembling bikes.  We waited to see if any stragglers would arrive and got a bit of a soaking from a shower.  Thankfully the shower stopped as soon as we headed out of the car park towards the shooting school descent.  We all safely negotiated the chalky descent and headed along the bridleway towards the main rode (between Swindon and Marlborough).

We crossed over the road and started on the first hill climb of the ride to the radio mast on the hill above.  Despite being tarmac all the way this is a hard climb.  A lot of us (myself included) pushed part of the way.  Special mention needs to go to Gary Palmer who ground his way to the top.

Having got to the ridge line we took the Ridgeway towards Liddington hill.  The wet ground and grass made the climb up Liddington hill tough.  Our reward was a fun descent down the other side of the hill.  All safely down we crossed the road and took the bridleway along the hill line climbing towards Sugar Hill.  Watching a bird of prey (a hawk I think) hunting in the nearby field took my mind off the leg sapping wet ground under tyre.  We continued on from Sugar Hill past the ancient barrows.  From there we took the fun and slightly slippery descent into Aldbourne, with the braver amongst us taking the optional jump half way down.

So would the burger van be in town?  The answer was no.  I thought I would have a mutiny on my hands, but everybody took the lack of bacon well.  Although I might have pushed it a bit when I pointed out that carrots were available at the Coop.

Fed and watered we took the Axford road climb out of Aldbourne and headed to the wonderfully named Whitehard’s Bottom.  The bridleway descent there was an excellent reward for the long road climb.  Unfortunately followed by a short sharp climb.  A bridleway and a nice bit of singletrack took us to the final descent of the ride, the club favourite Rickety Bridge.  At the top Gary noticed some fauna so exciting that he decided to dive off his bike to inspect it.  Botanical curiosity briefly satisfied he rejoined the ride.

Rickety Bridge is a real hoot when it is dry.   The recent rain made it a bit of a challenge.  Halfway down Gary spotted some more exciting fauna that required immediate inspection.  Despite a few slips and slides we all safely made it down to Ogbourne Maizey.

This took us to the final section of the ride, a long steady climb back up to Barbury past Four Mile Clump.  We almost made it through the whole 21 miles without a mechanical failure.  With our goal in sight (the other) Richard suffered a truly specular puncture riding through a puddle.  A loud bang was followed by an inch long hole in his inner tube and an instant flat.  Inner tube replaced we all returned to Barbury to end a muddy fun ride. 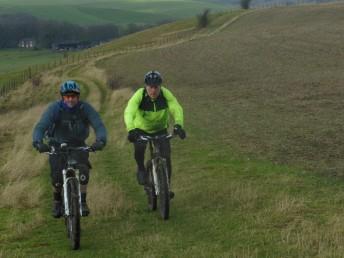 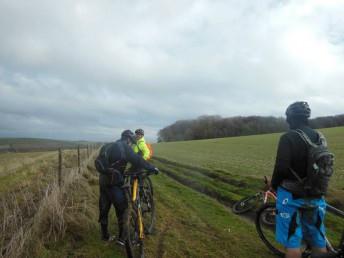 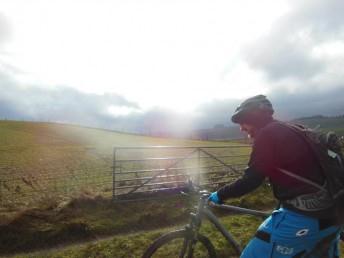 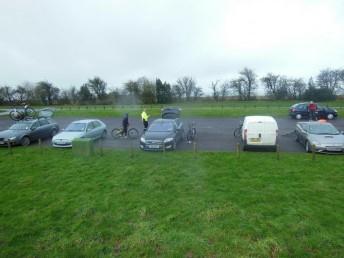 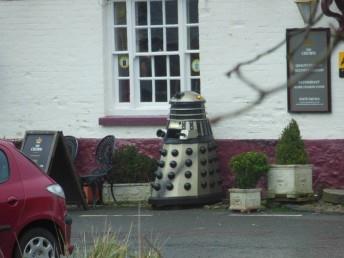