Words and pictures by Tim Noris

“I am sorry.” Said an increasingly worried ride leader as they rode through another stretch of muddy bridleway. “It was nothing like this when I rode it last July!” The weary riders carefully tried to avoid murky puddles of unknown depths.

The day had begun with bright blue skies and the promise of sun. While the weather was to remain on their side throughout their adventure, they had no idea what other dangers were ahead that day. After a brief safety talk at the cafe, they set off on a ride to discover the secrets and mysteries of The Monument.

Soon after they had started there were screams and yelling from the rear of the group. They stopped. The knowledgeable local guide made sure everyone was safe at the side of the trail, before making his way to where the commotion hailed. It was just as he had feared.

“What’s happened?” the concerned, yet totally in control guide, quizzed the riders.

“Its Richard. I’m not sure he’s going to be able to continue.” Exclaimed one. “We’re doomed!” said another. Before long, the potentially disastrous situation was brought under control (he tightened his front wheel clamp!) and the journey continued. 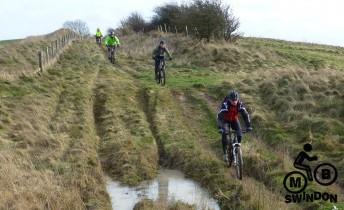 After a short while they were joined by another adventurer, who had travelled far and was heading in a different direction. Neal of Middlemore slotted neatly into the group and they followed the route laid out by people of old, straight outta Compton, and made their way up the Hill of Mud. It was a misleading start and the going was suspiciously easy until we were past the tree-of-no-return. Then it became sticky almost impassable. The group wailed and moaned as the sticky ooze dragged them under and tried to stop them passing.

The handsome local guide, urged them to push on and eventually they made it safely to the top. After a head count to make sure that none were lost, they continued on their way past the Gates of Robbie Williams and after almost faltering and straying down the Private Road they were back on track.

“There be the Gates of Robbie Williams!” pointed out the knowledgeable guide, knowledgeably.

The deserted ruins of Yatesbury loomed on their right but they had no time to explore. They still had much ground to cover and would need their wits and strength for the next part of the journey. 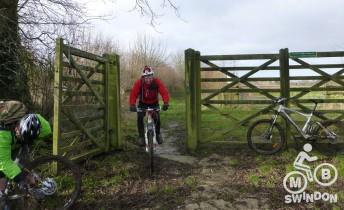 There had been talk of an enclosure where fearsome creatures roamed and as they turned from The Avenue and neared the fabled area the group grew silent. Soon the enormous gates that kept the creatures in (or out – they weren’t sure) were in sight. Once inside the enclosure and the gate was firmly shut behind them, something struck. An invisible force took one of the group and before anyone knew what was happening, Pete was on the floor.

There was no sign of anything interfering with him, nor was anything even moving – in fact the ground was free from any kind of obstacle or snare that could have caused him to fall. Never the less, he was flattened and while the rest of the group stood frozen with fear, the noble ride leader reached for his camera (though he was laughing a little too much and was beaten to it by Kristian).

They knew they didn’t have far to go, and though the ground tried to swallow them up, they swiftly made their way to the far side. There was no sign of the lurking monsters and luckily no more mysterious falls; soon they exited the gates at the other side. 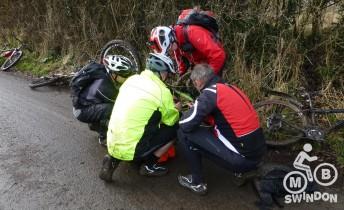 One of the bikes failed at this point and four of the travellers gathered to fix the broken chain. After some applause and much praise for the brave engineering effort (just a stone’s throw away from a thorn bush) they were off.

With haste, they made up some time through the next section and before long the Windmill Hill ByWay presented itself.  A labyrinth of ruts and puddles was ahead of them, unknown depths and dangers lurked beneath the dark brown quagmire, and with nothing but instinct and sheer guts to carry them through they navigated the treacherous pass.

A few fell on the way. Even the skilled, handsome, knowledgeable guide at one point had to pause and carefully place a foot on solid ground to catch his breath.

“I am sorry.” he said, becoming increasingly concerned for the safety of his followers as they rode through another stretch of muddy bridleway. “It was nothing like this when I rode it last July!” As his wheels sank a few inches in the mud, so too did the hearts of his followers.

“If he can’t make it, who can?”, one of them whispered. They struggled on and to everyone’s relief, the path cleared. The ground became momentarily solid and they were able to make their way to Avebury – where a number of the group had a snack and a wee. 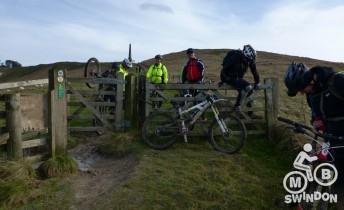 Time was not on their side. Already at least 25 mins behind schedule it was necessary to push on and head through the neolithic town to the “place where the horses run” and follow the Old Bath Road towards their goal, The Monument!

The undulating terrain tried to fool them, but ever watchful of hidden traps, puddles and pot holes they arrived unscathed at the foothill for their final ascent to Oldbury Fort and the Monument. The courage of the group inspired the humble leader who was impressed and moved by their spirit and determination.

They arrived at the Monument shortly after and only paused momentarily before returning to base camp, which thankfully was closer than they thought. Strangely, they had come full circle and were a mere half a mile from where they had begun their journey – much to the delight of those who desired a slice of cake and cup of ye olde coffee.

But before the sustenance could be enjoyed, one final act of faith was needed as the whole gang followed the fearless leader and plummeted down the chalky pass to the journey’s end.

“We’ll never survive that!” said more than one.

“Just follow me and do what I do.” Said the local guide, with so much confidence it practically hypnotised the rest into following. A slippery and deathly slide down a hill that should not have featured on such a quest was conquered by all and the adventure drew to a close…

After the drinks had been served and the food scoffed, there was nothing left to do but bid farewell until the next time and wish the local guide a safe journey as he began his long and solo journey back from whence he came…