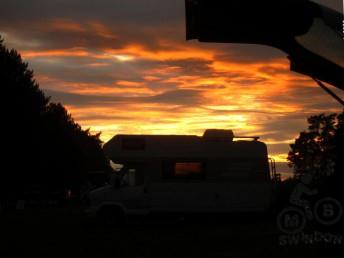 This was a low key team event – just Aaron from Cotswold Veldrijden  and myself, together known as “the odd pair”. Out for a 10 hour pair at the Thetford Enduro in Thetford forest organised by Thetford MTB Racing (this event was near Thetford). Officially called the Reval Outdoor Summer Enduro. Did anyone make it to the indoor enduro?

We turned up* the night before and started eating. On the journey down we’d not only watched a Zafira go backwards on a roundabout in Milton Keynes but also been treated to the wonders of BBC radio Norwich where Alan Partridge was alive and well discussing road tolls or something. If you like this follow b0ringtweeter.

The event ran from 10am until 8pm. Aaron went out first and came back with a smile and said “if you don’t enjoy that then there’s something wrong with you”. I found out what he meant – a lot of singletrack through the trees with swooping corners. It started by going down too which is always a good start to a lap. Things got a bit tougher with some climbing and a long drag along some fire road. Anyone who tells you that Thetford forest is flat is lying.

It’s actually quite a lonely business riding as pairs – you only see your team mate for a few seconds at the start and finish of each lap. Still, lap times were holding up well though Aaron was a few minutes faster than me so I got less rest. I really hit the wall in terms of energy at lap 6. I found a Mule bar in my bike box which seemed to fix that. Like all of these events it becomes a mental challenge in terms of treating each lap as the target and forgetting that there’s several more to come later. Aaron started out with 36 minute laps which gradually crept up to 38 minutes by the end of the day. Meanwhile I started at 40 minutes and gained a minute per lap until I did two 43:29s in a row and then hit the wall and dropped to 47 minutes.  Doing a reasonably hard event like this is great training both mentally and physically.

We ended up 9th out of 19 which was respectable in our view.

On the Sunday we crossed the road and road the Thetford forest trails. We found these quite entertaining in our knackered state but we were both happy to stop.