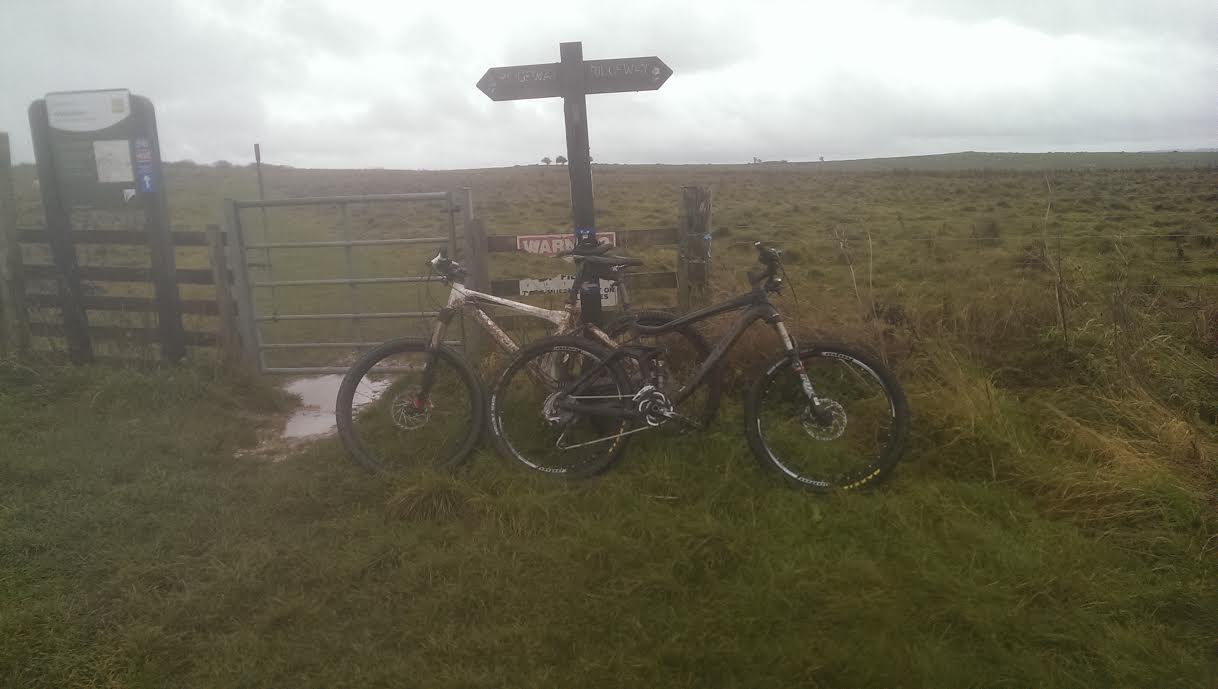 Lovely Richard Ford led the Clatford Clatter ride – here’s what he thought of it:

“Lots of rain the week before and the threat of more rain on   the day meant that I was not expecting a great turn out.  I was still slightly disappointed that only four other riders turned up at West Woods car park for the ride.

We left West Woods via the road rather than the tracks I had planned to use due to the wetness of the trails.  We took the Marlborough to Pewsey road to the top of Oare Hill and then turned right on to the farm track that lead us out on to the ridge line above the Vale of Pewsey.  Normally you are rewarded by a lovely view of the Vale.  Instead we were met by a bank of fog.  I explained to the others how great the view really is as we rode on to the first descent.  At the top Rafe took the opportunity to show Chris the correct posiiton to ride a descent.  Armed with that knowledge we all made it safely down to Gopher Woods and the first proper climb of the ride.  The climb isn’t that steep, but it is on slippery grass which makes it harder. 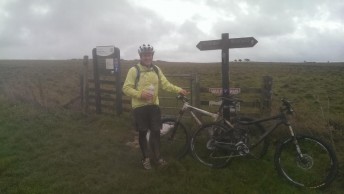 From there we continued along the ridge line with me embellishing how amazing the view was when the fog wasn’t there.  I’m not sure they believed me that herds Wilderbeasts and the Eiffell Tower can be seen on a clear day.  We then took the fun descent down Goldenball Hill to the car park where we met Mark Pulleyn and some of his friends riding the other way.  After a bit of a chat about how muddy it was Mark and co headed on up the hill.  At this point it became clear that Chris was struggling on his first ride.  I worked out a shortcut back to allow Rafe and Nigel to kindly lead him back to his car.  Considering the conditions and the bike he was riding it was a good effort by Chris.

Then there were two.  Rupert and I headed on up the byway to East Kennet.  The recent rain had filled the chalk ruts in the byway.  This made picking the right line important.  We managed to make it through without mishap and on to what I believe to be a hidden gem of a descent down to East Kennet. 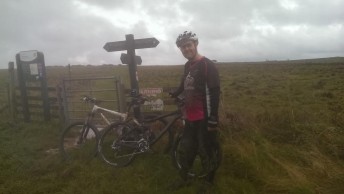 A bit of road work through the village led to the byway to the A4.  This is a rutty steep climb.  We both spun out our back tyres out at virtually the same time and had to walk part of the climb to the top.  We then crossed the road to join the start of the Ridgeway.  The original plan had been to ride down to Avebury for tea and cake.  Neither of us were bothered by this so instead we headed across Fyfield Down past the gallops to the descent above Clatford.

Lots of folks have trouble finding this descent and it has become a personal favourite.  Going through the elusive gap in the hedge we joined the narrow bridleway and picked up speed as the gradient started to increase.  Unfortunately we met a very out of it dog walker half way down meaning we had to kill our speed to go around him and his equally out of it dog.

The descent led us back to the A4.  Which we crossed to join the road back to West Woods and the end of what was for me (despite the low turn out) a highly enjoyable ride.  Thanks to Chris, Nigel, Rafe and Rupert for braving the elements to join me.”