It was one of those rare days, the sun was out and the sky a glorious shade of blue. My Fingers were crossed, hoping it stays this way all day.

Arriving at Barbury Castle, I was greeted by no less than 19 eager bikers, unpacking bikes and throwing on layers. It may of been sunny, but there was a definite chill to the air.

Before we set off, Jerome was having issues with his front brake, the pad separator spring bent out of shape. This was discarded witha shout of “tout se passera bien!” or similar!

Not wanting anyone to get cold, we promptly set off on time (well nearly) and headed straight to the hill fort doing a quick half lap round the top, before dropping down onto the ridgeway. A few clicks of the gears and we were off on the gentle climb towards Hackpen hill.

Just before we got off the Ridgeway at Fyfield Down, we had a good section of muddy ruts to navigate, most people chose the slow and careful approach and crossed without incident. We did have a few heroes in the group who went for more speed (me included), and had at least one sit down in the mud (again, me included). We had a little rest at this point, as everyone discussed what they thought was still the best way to ride ruts. 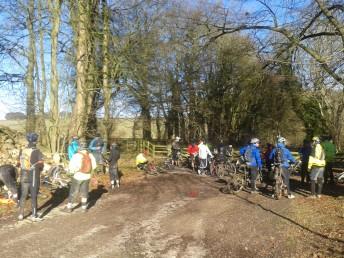 Crossing Fyfield Down, past the Sarsen stones and headed towards Rockley, we stopped at the top and had a walk down between the trees off the main track to view the rooty drop off. Surprisingly not many people in the group knew it was here. The more adventurous among us had a little play, with most having at least one run, and a lot of fun.

We then took the sneaky singletrack down the left side of the track through the trees, and regrouped at the bottom. Cue mechanical for Nigel. Unfortunately he was now down to just the rear brake.

We climbed the byway heading towards Barbury, but at the top of the first climb we then took a right and dropped into Ogbourne Maizey. A quick spin along route 482 and a bit of tarmac in Ogbourne St. George brings us to the bottom of Smeathes Ridge. Cue mechanical for myself. The rear shock deciding it was going to dump its damper oil and turn into a pogo stick. As we climbed higher, we were faced with a bitterly cold head wind, and even in the glorious sunshine, it turned into quite a hard slog.

As I bounced my way back into the car park, everyone agreed it was a great day out, and lots of fun.

I must say a big thank you to all that took the time to join me on our ride, and especially to Nigel for being rear gunner.