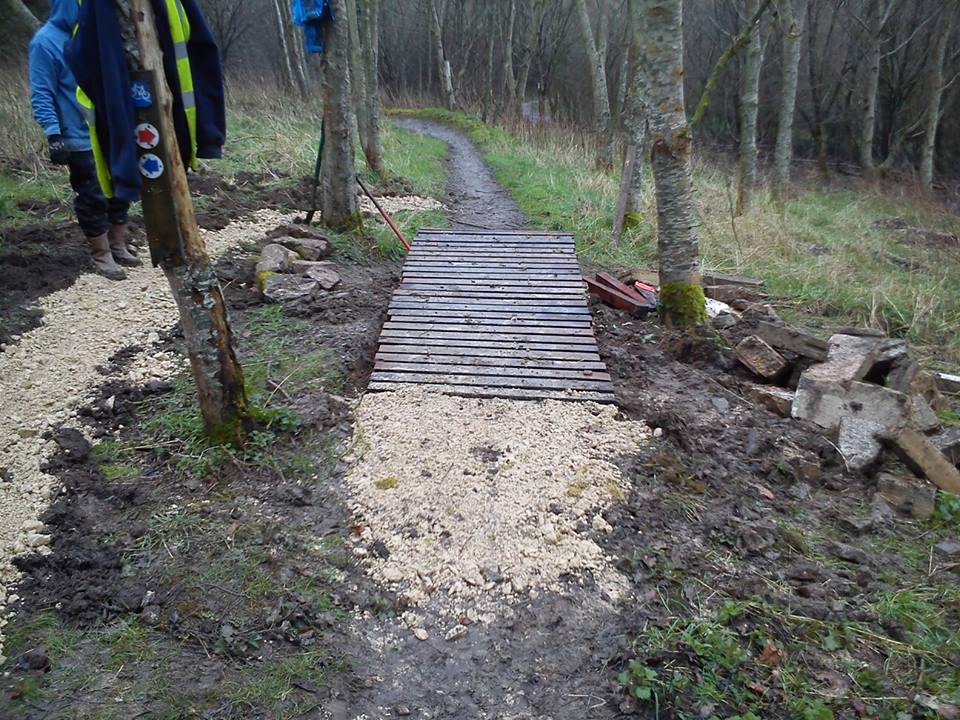 Jez, Gary and myself (Chris) were the first 3 on site on a cold and drizzly winter morning. The rock drop-off on Piper’s hill hadn’t been right for sometime. We’d previously removed the wooden feature that had become known as ‘the kerb’ from it’s original location – where it had never really worked as well as we’d hoped – and the plan for today was to relocate it and use it to replace the feature on Piper’s Hill. Two birds with one stone. As we started to dismantle the old rock drop Phil turned up and got stuck in. The feature had been there for a good few years and we were all surprised at how much rubble and rock we’d used to build it originally. By now Jason had turned up along with a young lady called Claire. Jason had a new notice board that the club had recently purchased to replace the one at the start of the trail so he, Phil and Sarah headed off to install that. 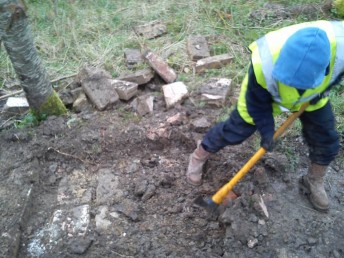 Meanwhile, we’d finished dismantling the rock step and were ready to install ‘the kerb’. Surprisingly quickly, we’d found it’s ideal position and had one end installed, I was dispatched to go and find the down ramp, which we’d hidden in a bush a couple of months previously, but not before picking up the kettle and getting a brew on. By this time Ollie had turned up and had set to work barrowing over gravel from a stash we had stockpiled nearby to surface the alternative line and  the run-up to the new feature. By the time I returned, Gary and Jez had both ends fixed in the ground and were now scratching their heads thinking about how far out the down-ramp should be fitted – too short and it becomes too steep, too long and those who jump the feature run the risk of clipping the ramp with the back wheel, causing damage. While the three of us were umming and aahing, a rider came through and jumped off the feature. Hey presto! The landing point of his back wheel gave us our marker. 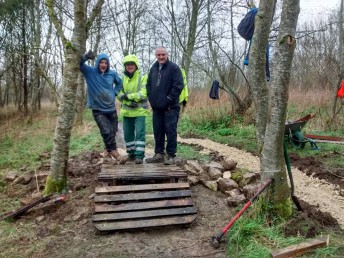 With the new feature firmly in place, Jez and Gary set off to fetch the compactor from the car park while Ollie and I set about filling in some deep holes that had appeared further up where the trail comes over the top of the hill. These types of trail repair aren’t easy when things are really wet. The gravel takes on a porridge-like consistency which it’s hard to do anything with. We carried out the repairs using hardcore (from the feature we’d just removed) and gravel tipped into the wet holes. Not the best repair we’ve ever done, but it’s better than it was and we’ll take another look later in the year. Just as we finished, Gary and Jez had also finished off compacting the trail around the new feature and we all spent a while admiring our handiwork while supping another brew.
By now it was late afternoon. It had been drizzling constantly all day and we were wet and starting to get a bit cold. Ollie had now left, as had Claire and Jason. This left me, Jez, Gary and somewhere on site, Phil. It was decided we’d load a couple of barrows up with gravel to do a quick repair on some braking bumps that had appeared – just before the berms at the entrance to the triangle – before calling it a day. This done, we headed back to the carpark, bumping into Phil on the way. Just before we left we went down to the lowest point of the trail to have a look at the first woodwork section. This woodwork has been kicking about in one guise or another for a good few years now and even pre-dates MB Swindon. On inspection, it was decided that the time had come to take it out, something that will be done on an upcoming build day.
All in all a good day’s work.