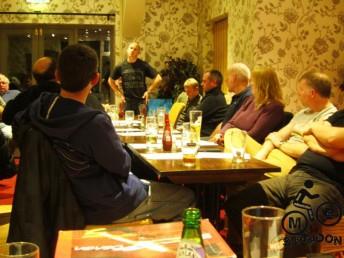 Phil welcomed 26 attendees (23 members) and the 4 other committee members in attendance:

In Rafe’s absence Kat gave an overview of the accounts.

A: This past year there has been a reduction in trail building/maintenance partly due to the tree felling taking place on site and partly due to the surface standing up well to use. The following year will see some changes to the design of the trail, with more woodwork and other features. There was also a requirement to have a float to cover the costs of events and trips, which has been covered by Committee members personal funds in the past.

Q: The accounts do not show the cost of insurance fees for the club.

A: It appears to have been missed off, as we do have British Cycling affiliation and insurance through the CTC.

3. Review of the year

Tom presented his usual stats overview informing us that in the 12 build days from the past year, 60 tonnes of material had been moved (aka 15,000 shovel fulls). This amount surfaces 600m of trail, or 12% of the total trail.

Below are an overview of the online membership stats presented as part of Tom’s review. 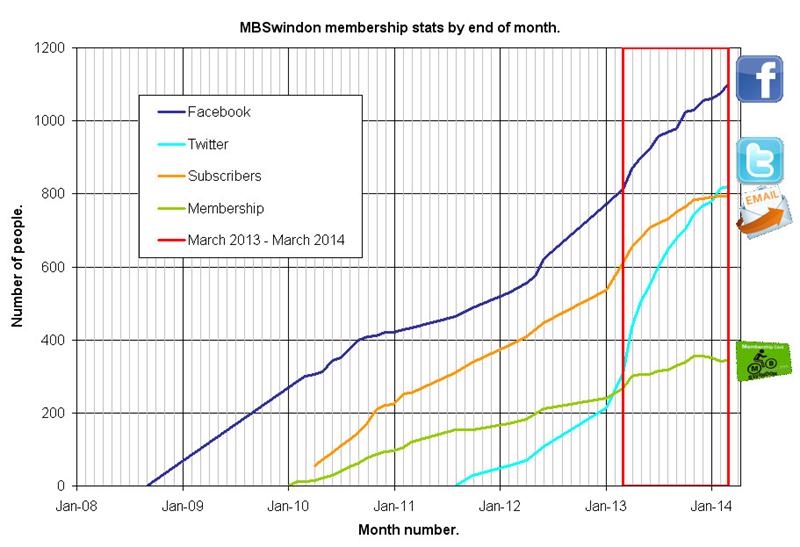 The club now has 36 volunteers organising events and helping with administration versus approximately 15 this time last year. Approximate summary of activity from March 2013 – March 2014.

Kat presented an overview of the membership statistics for the year, building on Tom’s general stats overview. Highlights include:

Sharon informed all that there has been an increase in female attendance on rides and at events, with more attending the regular rides alongside the ladies only rides. A key mention is the ladies team at Bikefest achieving a podium finish, the hope is more ladies will enter events like this in the future.

James gave a quick overview of the newly formed team, which has been a great success even though the core of the club activities do not focus on downhill (DH). In 2013 the newly created Enduro 1 series consisted of 4 rounds with members of the team achieving 2nd place, 2nd place, 1st place and 1st place positions in each round. Over the whole series they won the team category. Looking forward the team will have 5 members and will cover downhill and 4x.

John gave a quick overview of the newly formed team, which has been a great success. In 2013 the team was a mixed team (3 male, 1 female) and attended in the region of 20-25 events across the season between them. Within the Southern XC competition Lee came 2nd within his category, having only attended 3 of the 4 races and had he been able to attend all 4 they believe he would have come 1st. In the local events the mixed team came 2nd in Bikefest and 3rd at the 24 hour race at Mountain Mayhem. Looking forward the team will have 4 members and are aiming for more podium finishes and to attend more of the national events.

The club will continue to deliver club rides, trips and events. Looking forward to the new routes and variety the increased number of ride leaders will bring.

To continue with trail building, further developing the land available at Croft to make the trail the best it can be with the resources available. This will include completion of the woodwork in the triangle section and additional features still in the pipeline.

The recent changes to the format for the Friday night rides, to bring a more social element to the evening seems to have been a success and will continue throughout the year. From 7pm there is a fire and seating area set up (with tarpaulin as necessary) to allow people to sit around and chat about all things biking, with people choosing how many and pace of laps to suit them.

Alongside the sponsored race teams, the club would like to increase the number of members partaking in race events, such as Bikefest and Erlestoke. These events are not taken seriously and gives members the opportunity to ride in a team and experience the thrill of competing in a non-competitive way. They are always a good fun social event and you don’t event have to compete to attend, supporters are always welcome.

The instructors (Rafe, Chris and Pete) will continue to deliver skills training courses for those members (and non-members) who wish to brush-up and improve their skills.

After the success of the first aid courses in 2013, more dates will be arranged to ensure all ride leaders and members have the opportunity to partake in the training.