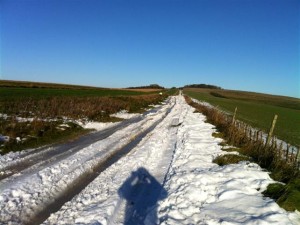 The sun was out but the temperature was still hovering around zero when six of us met up at Barbury Castle having completed our first challenge of getting up there in the cars (except Andrew who parked in Old Town and cycled up).

After allowing plenty of time for anyone else struggling with leaving their toasty beds or getting up the hill, we set off on the planned route but with the full expectation we might need to modify it on the fly depending on conditions.

The reasonably simple route actually worked out well despite plenty of ice and snow making progress quite slow – descents that you’d fly down in the summer were done at a mere fraction of the speed. There was plenty of foot dabbing but fortunately no “offs”.

It was lovely to see the sun but no matter what direction we cycled it was in our eyes – work that out! Equally illogical was why some places still had snow/ice yet a couple of metres later there was nothing with no change in shade/sun etc.

I don’t think it got above one or two degrees but half-way round Pete suggested a small detour to add in a couple more miles and an extra hill/descent so, with everyone’s agreement, we all got the chance to get a bit warmer.

Overall it was a great ride (around 12 miles) and brilliant to be out on such an amazing winter’s day.