Word by Tom Scott   Photos by Daniel Smee and James Roberts
Twelve of us gathered at Croft trail. Some of us had done a lap – or at least a bit of a lap – and at the stroke of 10 it rained very briefly. 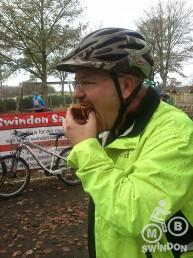 We rode up through Croft woods to the sports centre, turned back  down the steep steps back into the woods, and came out by the roundabout. Then we headed up into Signal Way and down the Old Town railway track, which was a bit muddy but nowhere near as bad as last Wednesday’s urban round.
We stopped at Hargroves for what seemed like an age, waiting for James to mend Caroline’s puncture. She used her womanly charms to get the guys at Hargroves to pump it back up, and off we set, through Mannington, Duck Bridge, Shaw Forest and Sparcells. When we arrived at Peatmoor woods there was much hilarity and changing of direction to make the most of the tracks, which were a bit muddy. 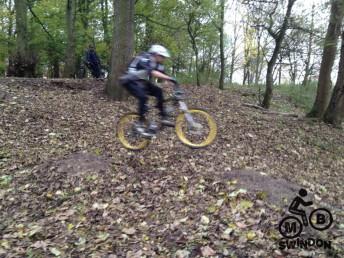 We then took a road and path section round to Lydiard Park where we did a lap of the lake including the rooty singletrack section at the bottom end, followed by hot drinks and snacks at the cafe. Whilst Gary P finished his soup, closely watched by Graham B & Debbie D, we all went off with Sergeant Smee to check out a little known hooning area right over the back, where efforts had been made in the past to build a few ramps and a tabletop. There were also some drops which we enjoyed for a short while.
Then back to Croft via Blagrove and up the railway track. ‘Twas a good ride, and one which I will repeat soon for those who missed it!
Tags: drift, lydiard, mb swindon, Mountain Bike, November 2013, urban