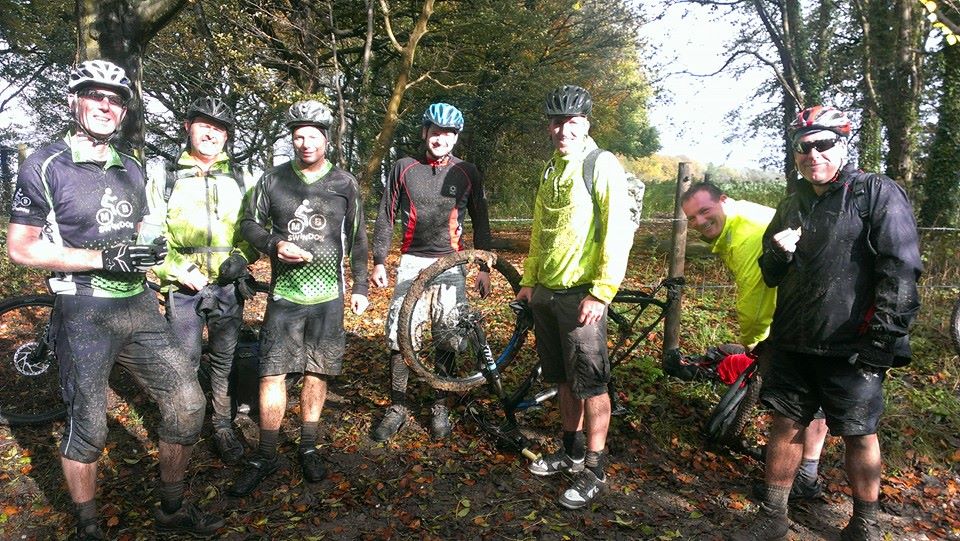 I had been looking at the OS map for a few weeks deciding which route to use for this ride, which was advertised as being a step up from the novice standard.  In the end I decided to go against common sense and make it up as I went along, ably aided my my oppo Graham who just hates to see an organisational vacuum.
We were joined by 6 other miscreants at Croft and off we set, across the Golf Club car park towards Coate Water, a lap of the lake up to Chiseldon and along route 45 to the mast climb. For those of you who haven’t done it, the mast climb is a 10% gradient road climb which is 1km long.  It’s a beast.  Anyway, we set off vaguely in the direction of Marlborough, down a rutty stony descent where a tree jumped out at your’s truly and pushed me off me bike where I was unceremoniously run over by Toopy’s mate Russ (cheers!).
What goes down must come back up, so we climbed back over the top and found the famous Rickety Bridge descent which was reasonably ok until an aborted overtaking manoevre ended up being off number 2 for me (Toopy was going too slow).  So we were back on the railway track, which was basically an inch of wet mud covered in an inch of wet leaves, and by the time we got to Marlborough we were all covered head to foot in mud.
We found a cafe in Marlborough and the young lady in charge said we could sit in their plastic chairs, which upon leaving resembled an explosion in a used commode warehouse.  Suitably refreshed, we set off back to Swindon, climbing all the way from Marlborough High street, passed the Rugby club and all the way up 4 mile clump to Barbury, back down over the castle and up to Burderop, then down good old Ladder Lane to Croft.  30 miles and 2000ft of climbing, all feeling fresh as daisies!
Summary – good old fashioned club ride, loads of laughs, plenty of mud, some new faces as well as old pros, just a shame more people didn’t turn up to share the experience. See you all next time, much love…
Tom