It was a last minute addition to the calendar and I will admit to being a little concerned that I would be riding on my own, so when 10 people showed I was very pleased indeed.  We met at the Small Grain Picnic site between Devizes and Calne for a spin around my local trails on a day that presented us with some perfect riding conditions.
There was only one newcomer so the pre-ride briefing was swift and once we appointed a rear marker we headed off up Morgan’s Hill. By the time we got to the top we had to bid farewell to one rider with a bottom bracket issue. This was actually convenient as we were now down to 10 – a number I can keep count of on my hands! 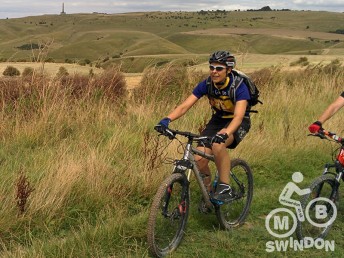 We rode up to the bomb hole at Furze Knoll and most had a blast down the steep bowl and one of us bunny-hopped the fallen tree blocking the exit. To be fair I may have bottled it on my own, but as I talked up my bunny hopping skills I had to commit. It was a twitchy moment but it felt pretty good. No amount of encouragement could convince anyone else to have a go, but there would be an opportunity for some revenge before the ride was over.
After a blast down to the road and some farm tracks we had a little (perhaps slightly cheeky) visit to the Roundway Covert. This local bit of singletrack is too good to miss out on a ride in the area and I think everyone enjoyed it. The final section is a fast loose descent through the trees. We had a minor pile up as speed got the better of one rider and another took his eyes off the trail to watch the crash in front of him!  No real damage done and unfortunately the the requests for another go had to be denied as we had a long way to go.
More fun and fireroads followed as we headed back to the car park before starting the second leg.
This was where I mistakenly informed the group about my failed attempts at riding up some worn steps in the car park. Matt Dobson showed me how easy it was by hammering straight at them and getting up first time. I then succeeded using the same technique, followed by Graham Burgess and Mark Pulleyn. 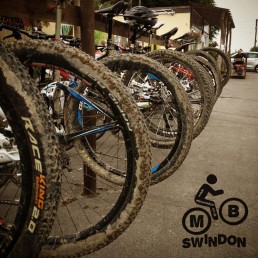 Off we went to do a new section for rides in the area and had a sweet ride down into to Calstone through some fields – where the farmer had conveniently left some gates open for us so we didn’t need to stop.  Down and then out of the beautifully named Ranscombe Bottom was fun as many struggled up the rutted muddy bridleway before we rode across to the Divine Cafe for a much needed break for some. 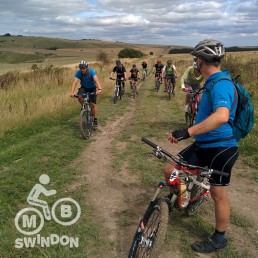 After tea/coffee and cake we hit the rode and headed off up through Cherhill and Yatesbury, across the A4 to the Wessex Ridgeway and the climb up to the Lansdowne Monument. At this point we noticed one of the group had developed an interesting mechanical and had lost a bolt from his swing arm near the back wheel.  Some cable ties managed to hold it together for the rest of the ride back as the Wessex Ridgeway turned into the White Horse Trail and led us back to the start.
It was a great ride that totaled around 30k with approx 500m of climbing.
Tags: calston, cherhill, divine cafe, july 2014, last minute meander, mb swindon