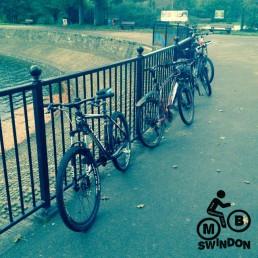 Twelve brave souls gathered for a ‘Novice Friendly‘ ride of some 20 miles along the Ridgeway. I planned this ride for 3 reasons:
1) As a recce for the Dawn to Dusk ride on 21st December,
2) Because my previous Western Ridgeway ride had taken the road from Foxhill to Chiseldon and there was a gap which I hadn’t previously done on a bike, and
3) Because we don’t often ride that bit of the Ridgeway on club rides as it involves quite a long road section.
We set off in good spirits from the cafe at Coate, along the now-familiar route to Chilseldon, along the old Marlborough railway for a bit then set off along the Old Ridgeway (road) towards Foxhill, turned right at the main road, then right again onto the Ridgeway proper. The gravelly climb to the summit of Liddington Hill was reasonably easy as we were sheltered from the wind by the hill itself, but once we were at the top the weather (as well as the 200 metre climb) started taking it’s toll and Tim decided to call it a day and off he went back to Chiseldon.
The ridge was muddy, wet, cold and there was a massive headwind. I regretted not reversing the route, but it was too late for all that so we ploughed on. Once back on gravel and in the trees, we had some shelter and toddled along to the long downhill section into Ogbourne with the speed bumps where a few of us got some air, which was fun.

We stopped after the first gate on the ascent of Smeathes Ridge for a feed, and having fed, most of us set off again. I had held a gate open and ended up at the back, waiting for Ruan, Rob and Paul.  In the end I rode back and found that Rob had a seemingly simple puncture, which despite his best efforts Paul could not fix. Rob had a spare tube which would not inflate because it was faulty, and there was no-one around with another 29 inch tube, so Rob had to abandon the ride and off he went to Ogbourne for a lift. 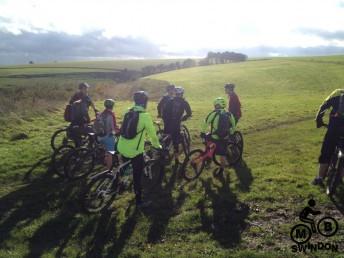 I had sent Ruan off up the hill to tell everyone to keep going as the weather was bad, and I didn’t want people exposed, and rode up after with Paul Allum, having seen Rob off. By now the wind was very strong, cold and wet and coming in from our left, alternating between a head wind and a tailwind, but mostly just a big wind. We all met up at Barbury Castle and set off as a group of 10.
As we approached the fort I decided to ride the earthwork on the south side, which meant going straight into the wind, Rich Ford and Mark Pulleyn did the sensible thing and decided to wait in the relative shelter at the bottom, trouble was that no-one saw Mark go down the hill, he waited for a bit and decided to go home.
The main group completed the circumnavigation of the old fort, then rode down the chalky, muddy slope to the gravel road where we re-grouped. It was at this point that we realised Mark was missing.  As the weather was very bad we decided to ride down to the main road, firstly to see if Mark was waiting down at the bottom and, secondly, to get off the ridge in case it got any colder.
Needless to say, he wasn’t there. I quickly decided that he was either a) in a ditch up at the fort, or b) at home eating hob-nobs, so I asked for volunteers to go back up. To their credit Paul Allum and Graham Burgess rode back up the tarmac road to Barbury, and Rich Ford and John Crocker came with me back up the gravel track we had just rode down. The other 4 were issued with directions back to Coate (go to Chizzy, turn left).
Rich waited at the fence with the bikes and John and I walked up the steep bit just as Graeme and Paul came round the wall, having established that Sparky had not fallen in a ditch we resumed the ride at pace and ended up back at Coate.
No harm done, everyone enjoyed the ride and got back in one piece! For me a lesson learned, and I now ensure that if anyone leaves a ride early they tell someone that they are going.
See one rider’s Garmin map here.
Tags: Barbury Castle, bring a coate, chisel don, lidding ton castle, mb swindon, Mountain Bike, November 2013, ogbourne, ridgeway, smeathe's ridge