Kristian lead a ride from Barbury Castle, and here’s what he had to say about it: 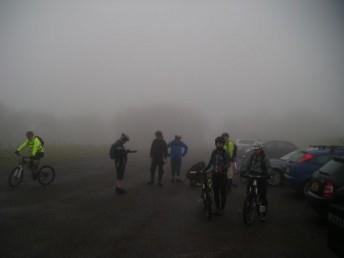 As we turned into the Barbury Castle car park we were met with a real pea-souper of a fog, just being able to see everyone setting up their bikes, and carrying out the usual faffing associated with our rides. It was slightly colder on the top of Barbury Castle than in Swindon, and definitely a ‘thick glove ride’ as Hannah said to me.

Today we were riding down Smeathes Ridge, to Ogbourne St George and across a byway to Ogbourne St Andrew, back to Four Mile Clump, then Rockley, New Totterdown Woods and back to the Ridgeway and Barbury Castle. Some might say that this route is better in reverse, and it will definitely be something I’ll do in the Summer.

On Smeathes Ridge the fog was so thick, there was similar visibility to riding at night, with horseriders and walkers looming out of the fog. Definitely a tricky navigation exercise trying to remember where the gates and fences were.

There was plenty of coughing and spluttering as we rode and by the sound of it, many people appeared to be shaking off the worst of their winter colds. I wasn’t sure if they should have had cough medicine in their camelbaks or whether we’d have to stop at the nearest chemist for a refill. 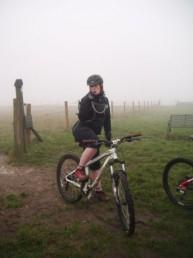 On the week before this ride, I recce’d the route and found fast and dry trails throughout after a few dry days and low double figure temperatures. Perhaps that was Summer!!rest chemist for a refill.

Today could not have been more different. It was MUDDY!! On many occasions we had to clear the front and rear mechs of mud just to make progress.

I’m not so sure it was a good idea to ride through New Totterdown Woods this early in the year as the bridleway was really well churned up. Once it dries out, it’s a nice bit of woodland singletrack. There was mention of the Reeves Pheasants we saw here a few years ago, but none were seen today (http://en.wikipedia.org/wiki/Reeves’s_Pheasant).

The wet weather had not been kind to the next bridleway as that was a real slog back to the Ridgeway, with seemingly every pedal stroke just spinning the wheels and making very little progress. It was certainly a workout though!

I think most people were glad to make it back onto the Rigdeway, with a hard surface to ride back to Barbury Castle and only a few small hills to climb.

Whilst this ride was slightly shorter than most, the mud and poor visibility certainly made it a challenge at times, but I look forward to riding it later in the year.