Words and photos by Richard Ford

Surprisingly, this was the first MB Swindon ride since February to start from Barbury Castle.  I rode from there a lot in the summer and the planned ride was a slightly longer version of one of my favourite evening loops. I was the first person to arrive at 9:30am, closely followed by James. Very quickly the car park started to fill with riders setting up kit and doing the essential safety check of bouncing up and down on the bike.  After waiting for a few late arrivals, our group of 23 riders set off out of the car park towards the hill fort. Cutting straight through the middle of the fort, we took our first descent down the steep side of the fort.  At the bottom, I waited slightly nervously, hoping to see everybody get down safely. A minor collision on the way down led to James having a little bit of a lie down, but nothing serious.

We then headed on to the Ridgeway, up the gradient towards Hackpen Hill.  Half way along we had our first mechanical of the day.  Our glorious chairman had the bad luck to catch his tyre on a piece of flint, resulting in a slashed tyre.  We waited by a small copse while Phil attempted to repair the damage. Unfortunately this wasn’t possible, meaning that Phil and Sarah had to abandon the ride.

After the wait, I tried to warm everybody up by picking the pace up slightly as we continued along the Ridgeway. At the top of the next rise we turned off, on to the rather muddy bridleway to Totterdown Woods. We slowed the pace to try to avoid catching up with the two horse riders in front of us. At the woods they turned off to head around the woods and we dived into the woods to enjoy the singletrack route through. I always enjoy riding through here, my only gripe being that it’s over so quickly. The track was rather boggy in places, but nowhere near as bad as it can be at this time of year. At the other side of the woods, we again met the two riders and had a quick chat with them, agreeing to head towards Rockley by slightly different routes. 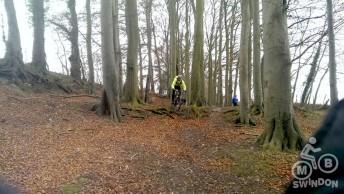 We turned left and headed down the hill past the sarsen stones. Turning left we headed to the wooded area just above Rockley, where I called a halt to let those that wanted to, have a go at the small drop offs there. After a bit of getting off the bike to inspect them, folks started rolling and jumping them while I took some photos (after riding it myself, of course). Unbeknownst to me, there were a couple of wheel sized holes beyond the drops.  James managed to locate one of them for a very spectacular off that involved actually throwing the bike in a catapult motion after he landed. While we were checking that he was alright (he was) the second mechanical of the ride was discovered: a warped disc rotor. While it was being fixed, a lively discussion was held about why it was ‘pringled’ and not any other brand of crisp. Riders and bikes fixed, we headed down to the road, with most of us taking the ribbon of singletrack that runs parallel to the bridleway. I may have over-egged my warnings about the log drop halfway down, but it catches me out every time. Today I bravely avoided it. A number of brave souls jumped it. 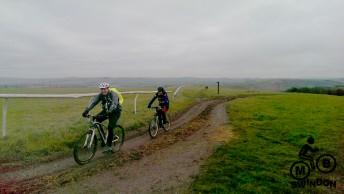 At the road we met our two horse riders again and waited for them to go past. After negotiating another set of riders, we headed onto Free’s Avenue briefly before turning back off road.  I could hear happy groans behind as riders realised we were going to take the climb back up towards four mile clump. At the top, we regrouped and carried on toward the turning to Ogbourne Maizey. When it is wet this bit of track can be as slippery as a very slippery thing. Thankfully it wasn’t, so we all arrived safely at the top of the bridleway descent to the farm below. Knowing that I am not the fastest rider, I offered those who wanted to get a bit of speed up the chance to go ahead of me. Doing my best to keep up I headed down the descent, thankful for the full suspension on my Trek. As I rounded the corner at the bottom I was confront by the sight of James laid prone on the bank. When he had recovered from being winded, he explained to me that he had managed to clip the corner at the bottom, leading to a rather nasty dig in the ribs from his handlebars. Ouch!  At this point I feel obliged to point out that on the other rides I have been on with him, he’s stayed on the bike (often when I haven’t).

At Ogbourne Maizey we turned off on to the lower Ridgeway, taking it to the foot of Smeathe’s Ridge. There we said good bye to two of our number who took the road route back to Swindon.  The rest of us took the long climb up Smeathe’s Ridge. Thankfully the light winds only meant we had a slight headwind (it’s always a head wind up there). Impressively, everybody made the climb without stopping to end what was for me a very enjoyable ride in good company.