We meet up at Lydiard Park cafe for a little jolly around the cycleways of west & north Swindon. Eleven dedicated souls decided that the Easter eggs could wait and that a bike ride was the first event of the day; good on them. 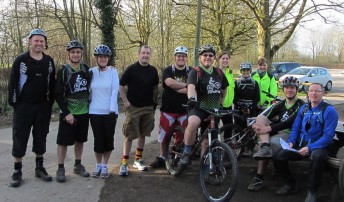 The ride started at the earlier time of 9 am due to the fact that parking can be a bit of a pain later in the day. So with the weather good, we set off on our little tour.

Mainly taking tarmac or gravel cycle paths, we visited some of Swindon’s little outdoor gems: Shaw Forest, Moulden Hill, the old canal and various green corridors to link them all up. With the emphasis on this being a social ride, the pace was chilled so that we could all have a good natter and stop for a break if the idea took anyone’s fancy.

After a few hours of pedalling around, we had travelled 16 miles and returned back to Lydiard Park to find half of Swindon there enjoying the sunshine. It appears there was a family Easter egg hunt underway which I had not realised was organised. So with the queues for the cafe only slightly shorter than the distance we had just ridden, the finishing coffee was off the menu for all but the most dedicated. Another good morning out on the bike with MB Swindon, cheers guys and gals!