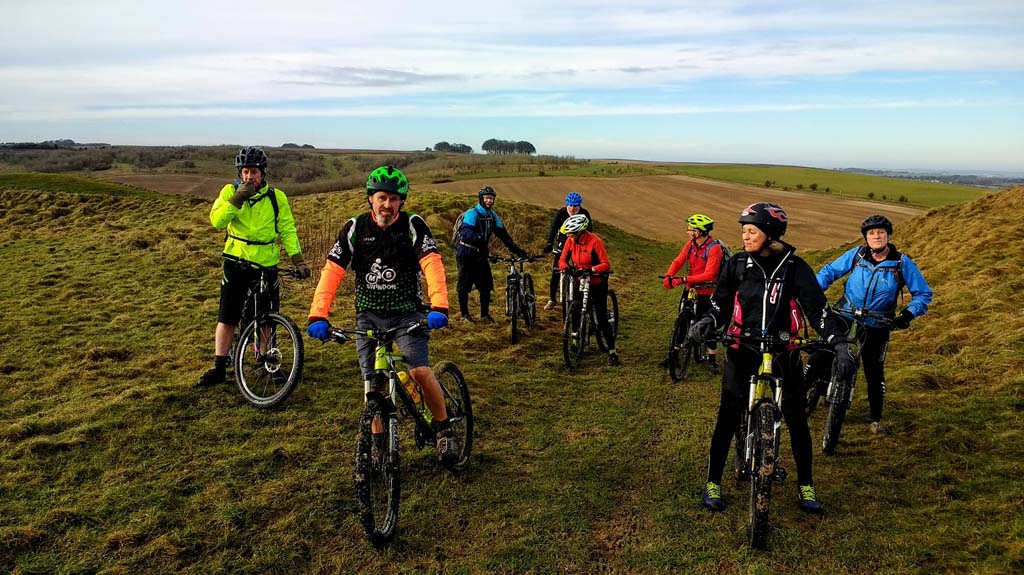 Trying to come up with a route that is winter proof is quite tricky, especially considering it’s predominately clay and chalk around these parts. It was billed as a winter proof route that will miss out on any seriously muddy parts. Unfortunately, with all the rain that we had in the week prior to the ride, the route was, umm, a bit, well, muddy actually.

Still, the week’s rain didn’t deter the hardy folk of Swindon, as 10 eager riders were readying themselves at Coate for a slightly cold, grey, 9am ride.

Sticking with the harder surfaces, we had a route that took us from Coate out to Chiseldon along the well rolled Sustrans route, before heading along the Old Ridgeway to Barbury Castle.  By this point Kate had already lost half her gears as her front mech refused to play ball any longer.

A soggy grass climb up to the hill fort was next, followed by having to navigate the gates at Barbury Castle. Why mention this? Well it looked like a billion plus sheep had flock through the gates just before us, turning the grass into a hoof printed slurry.  Tyres suitably caked in mud, it was on to Smeathes Ridge for a soggy grass descent to the village of Ogbourne St George. Although it certainly didn’t feel like a descent when you have to pedal the whole way down!

Winding down the lanes past picture postcard cottages, the sun was slowly breaking through, a nice touch of warmth allowing the extremities to start to thaw out. After a mile or so on the old Chiseldon to Marlborough railway line, we were back on the Ridgeway for the longest climb of the ride. A few crunches of gears and everyone fell into line weaving back and forth across the rut that had formed in the middle of the track.

After a rest at the top munching Kate’s amazing homemade flapjack, we set off on a little loop of hardpacked tracks that returned us right back to where we was. From here we waved bye to Gary’s badger and set off to retrace our steps down the Ridgeway. Skipping over the drainage gulleys come speed bumps, we were soon back on the Chiseldon to Marlborough railway line heading back to Coate Water.

A nice 22 mile leg spinner with great company. Many thanks to everyone for making the effort and joining MB Swindon for our Round the Ridgeway ride.

See you all on a ride soon!