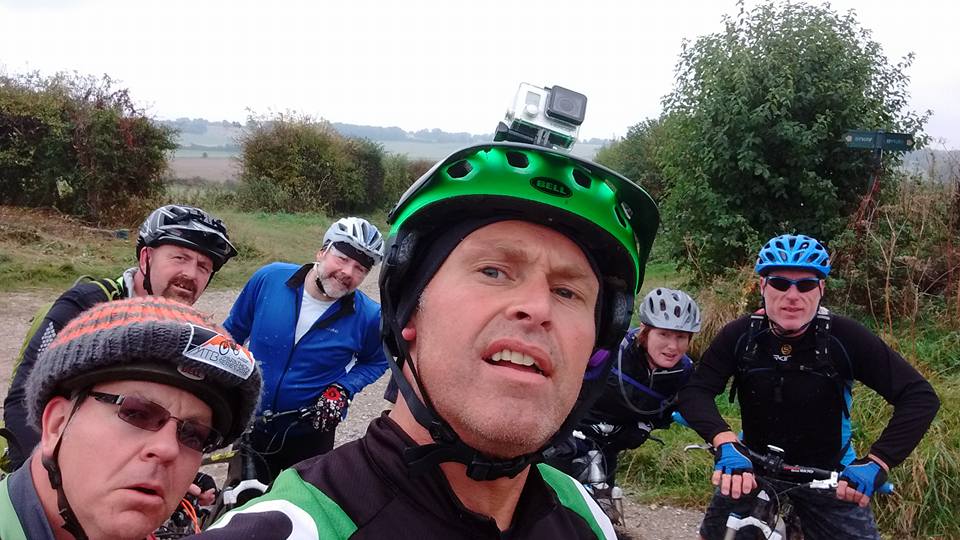 The morning started of foggy but what I had planned wasn’t going to be dull.

As I was first at Coate Water I did my bit of faffing around and though the park was busy I couldn’t see any mountain bikers (always a worry). I needn’t worry as the first to arrive was Claire who I hadn’t seen since her off an Brechfa, the next to arrive was Gary Yeates then I could see Gary Duller and Tom Scott heading towards us, and through the trees I could see Sean getting his bike out of the Van.

After a quick briefing the six of us set off through Coate Water and up to Chiseldon along route 45.

Skirting around the outside of the village we rode out towards Badbury and up to Liddington. The fog hadn’t lifted so there was nothing to see along the road under the castle.Being quite a cold morning the road climb was a nice warm up. We joined the Ridgeway at Fox Hill and started the climb to the top, the descent on the other side is always good fast fun, not this time though a third of the way down we took a left down a long fun single track which brought us back down to the road. After a short ride along the road we take a right turn along a bridleway just before Bishopstone village.

As we climb up through the Coombe it’s becomes noticeably still almost spooky and very quiet, That does last long as the groups conversation (me not included) turns to Justin Bieber.(Don’t ask).

As we make our way out of the Coombe a buzzard over head drops his prey just few yards in front of us, the prey unfortunately was dead and so was the Justin Bieber conversation. 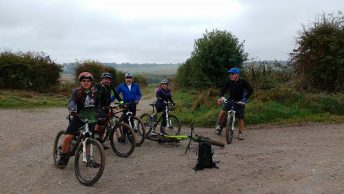 Heading along the Ridgeway we make a slight detour along some single track in the woods parallel to the path, this short section is always a nice alternative if the woods are dry. Heading past Wayland Smithy we leave the Ridgeway path and ride over the downs towards Lambourn. This bridleway went on for a couple of miles through undulating countryside until we reach a farm and the lane which leads to Lambourn. As we pass the farmers house a Labrador and Doberman come bounding across the field barking,this can be a bit daunting especially if you don’t like dogs, someone then shouted where’s your mate, this was to the dogs who were getting closer as I looked across a mastiff (the mate) also came bounding towards us. The pace of the ride seemed to pick up slightly as we passed their field.

We were never in any real danger as they do this all the time to people who pass by, and as Tom had pointed out on a previous ride “they stop at the fence” which the first time I encountered them was no real comfort as the fence was only about a foot tall!

We carried on past some very nice houses and stable yards as we entered Lambourn.

On the edge of the village is a bit of a gem, a wooded area with some great single track and some pretty crazy jumps and drop offs, as we were only passing through we only rode the single track, though Gary D did venture off for a bit.(we never did get to the bottom of what he was up to).

We made our way to the cafe for bacon sandwiches, mugs of tea and some nice cake.

As we left the cafe I think the majority of us were still feeling the cold so the nice road climb out of Lambourn was just the job to get us warm again.

We left the road to follow a bridleway back down the valley and up the other side to the top of some gallops with far reaching view across the countryside.

We made our descent to join the very rutted bridleway towards Russley Park, this particular bridleway is a bit of a slog in places and it was good to get back onto a country lane, albeit for only a few hundred yards before we make the climb out of Russley Park over the downs and towards the Ridgeway. The first bit of this bridleway is used mainly by horses so the path is quite a climb over bumpy ground, but once you get to the top the views are great.

After having a quick breather and a bit of a geography/history lesson we make the descent down towards the Ridgeway, this is a chalky descent with quite a few ruts thrown in for good measure and can be lethal in the wet and trying to pick a suitable line is also a challenge. Luckily we all got down safely.

We rejoin the Ridgeway for the climb towards Fox Hill.

Once at the top I could see Tom was itching to get past and make the descent to the car park, (He loves that Descent), but I had other plans, something a bit different. We took the path off to the right crossed the road and down the bridleway along the top of Coombe and dropped down into Hinton Parva, in the dry this is a great descent and everyone enjoyed it, especially Gary Yeates, who raced down thinking I was filming him but alas I was still at the top shutting the gate.

Once we regrouped at the bottom those that know the area where commenting about what was to come. The planned route back was on the road with one particularly nasty road climb, so I gave them the option of a alternative flat route back but it would be a bit longer, they didn’t take much persuading.

We made our way down a quiet lane which eventually turned into a bridleway along some fields.

With the Ridgeway and the nasty road climb far away to our left we made our way along more country lanes to Lower Wanborough and back to civilisation. We headed back to Coate Water via the cycle track past the GWH.

The route with the extended section was approx 34 miles with approx 2000 ft of climbing, It was a great day with great company,and no mechanicals. Everyone enjoyed it. And with the final words from Claire, “I will sleep well tonight”, job done.