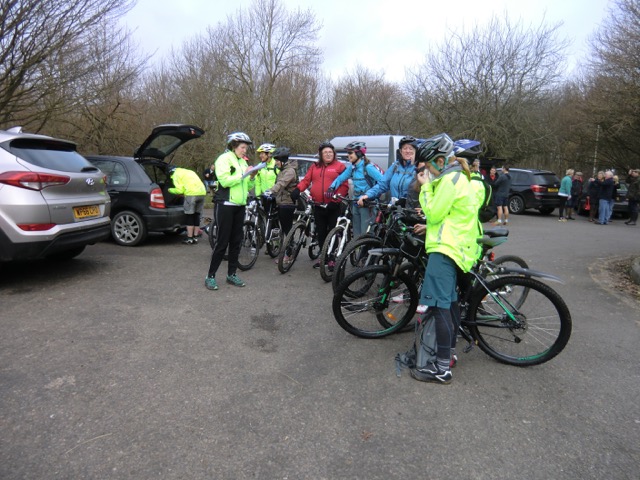 Words and photos by Debbie Davies

The first surprise to the morning came as I cycled into the Croft Trail car park, only to be met by a swarm of 10k runners. This had not been anticipated. After a brief chat to with the organisers it was that any Lady that came in a car with a mountain bike would be admitted, potential disaster averted.

As we all signed in the total group numbered 12 and a quick photo was taken just to prove that we had all turned out on a quite settled morning. We left the car park in a gap between runners and cleared out of their way before we caused more havoc.

The ride was a mix of Swindon single track trails and cycle ways with a only the smallest bit of road thrown into the pot. Happily we had not too much mud on the trails and everyone could chat without having to concentrate too much on the ground conditions.

We made our way along the Swindon country parks ticking off the lakes as we went, Coate Water was the first, then the Lawns and the railway line and the canal took us down from Old Town towards West Swindon.

As a little surprise I had put in a small section of tunnel with a drainage culvert at the side of the trail. A quick explanation of what we were about to meet and then we all rode along it and popped up the other side. It’s a small section we don’t ride very often and it seemed to go down rather well, a bit of an adventure in miniature.

The next lake we reached was Mouldon Lake, where we stopped to share some of Claire’s amazing Brownies. A really nice treat mid ride that saw us fuelled on towards Peatmoor Lake and the final waters of Lydiard Park. It was here that we stopped for coffee and cake and met up with Nikki who had pulled her ride short due to an injury (not on our ride I might add). We celebrated her Birthday with a song and candle dressed cupcake.

The final push towards home went from the park and onto the cycle way back to the railway line, and at this point some of the Ladies peeled off and headed to their own homes. The end of the railway line back into Old Town saw a few more head away possibly hoping to avoid the last hill where they had to retrace their steps.

The remaining few sped down the hill back to the Croft Trail car park, now devoid of runners and back to it’s usual quiet. Just to finish off, after the last goodbyes, a couple of us did a lap of the trail, seemed rude not to.

Many thanks to Sarah, Sharon, Carine, Tess, Jill, Bex, Caroline, Nikki, Paula, Claire and Hazel for making my urban ride such fun.