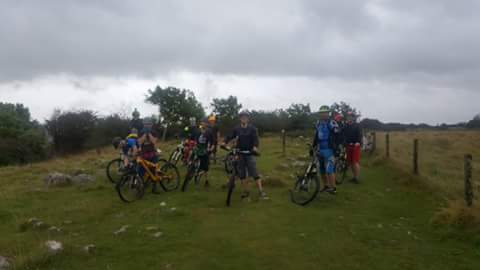 The forecast was for rain, and a fair bit of it. A fat band of rain was to sweep across at some point in the afternoon. It was a case of being prepared to get wet, but just how wet we’d get, we didn’t know at this point.

The day’s gaggle of bikers consisted of eleven fine looking gentlemen (no women today, I’m afraid) on a variety of steeds.

The Swan Inn at Rowberrow had kindly let us use their car park for the day’s ride. It’s a fine old pub that serves great food, real ales and proper cider. The icing on the cake is the fact that you are only a few pedal strokes from the start of some trails. Can’t complain about that.

Setting off on time (or thereabouts) we were straight into the first off-road descent, a piece of singletrack that took us down to Rowberrow Warren. The wet slippery rocks provided an early test of concentration. 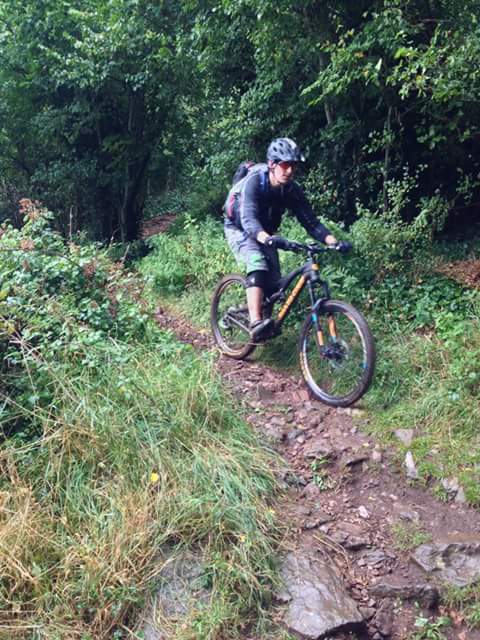 Safely at the bottom, we then had to ride alongside a bubbling stream, skirting the edge of the warren. We climbed up the side of the hill, slowly at first, but then testing the legs the higher we went. Blood suitably pumping, a short recovery spin along some tarmac took us to the quarry north of Cheddar. A straight run down a rocky track alongside the quarry was a good way for the crazy gang to press on and do a bit of stone skipping on the way down. Mike Duller unfortunately picking up the first puncture of the day. 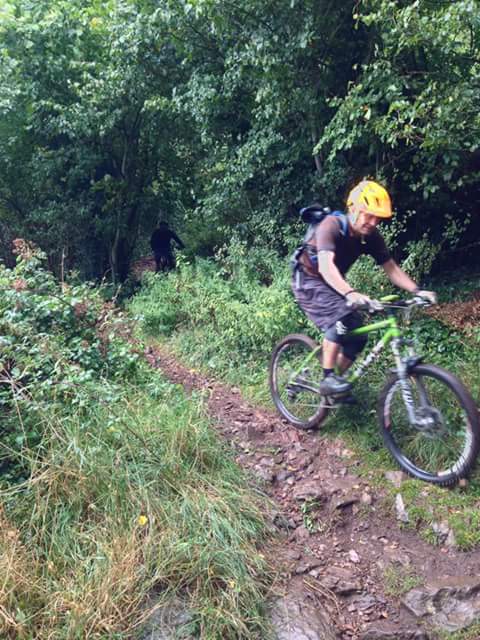 Now on the edge of Cheddar, and with Mike suitably re-inflated, it was a short ride down a few streets to the bottom of the Gorge road. It would be a shame to come all this way and not ride up the road through the Gorge itself. So up we went. It’s a gradual incline with some steep bits around some of the switchbacks, but if you take in enough of the scenery you seem to get up there in no time.

Dippy had snapped his rear mech cable coming down the side of the quarry and was trying to singlespeed it up the hill. Finding it hard going, he and chief mechanic Rich Rowe managed to bodge it so he now had 3 gears instead of 1, making it far easier on the legs. Fair play to them. 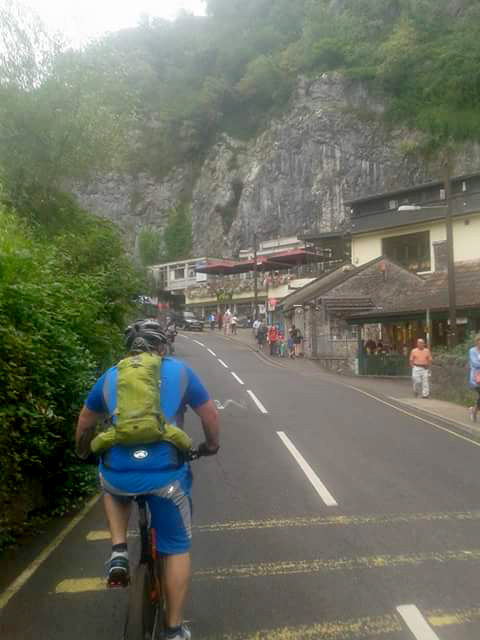 By now, big blobs of rain were falling from the sky as we started the hike-a-bike up to the Gorge top walk – It’s a bridleway, don’t panic, people! Getting to the top just as the rain was easing off, we were greeted with some pretty good views. From here we had a mile or so of going down, skirting the edge of the Gorge to start with then heading inland a little, all the way to Cheddar village.

We started off slowly, pootling along, taking in the scenery before deciding the best way would be to give each other some space and meet up near the bottom at the look out tower.

The ride along the top is a good’un: glorious views of the far side of the Gorge, a gradient that means you don’t have to pedal much and the added bonus of riding amongst goats, if that’s your thing. With rocky outcrops, wet grass and exposed edges not far away, you had to keep you speed in check. Everyone came down smiling (I think they were smiling) having enjoyed it for different reasons. 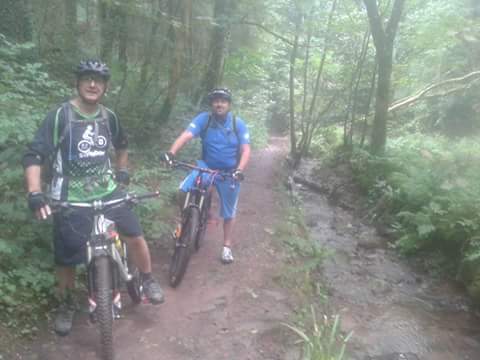 We soon picked up the West Mendip Way heading out and around the Gorge, eventually bringing us to the edge of Blackdown Hill. Here we passed runners doing the Butcombe Trail Ultra Marathon, looking suitably tired. With the heavens opening up again – this time using their full arsenal of rain – we skirted around, down and then finally back up to the trig point. Soaked through, we headed back into Rowberrow Warren for a quick blip down a man made trail before our final descent down a rock gully.

Poor Mike picked up the second puncture of the day and decided to jog the last mile or so back to the pub.

Bikes quickly stuffed on racks and kit thrown in cars, it was straight into the pub for isotonic beverages and food. Job done.

Probably the wettest ride in a very long time, but still a great day out on the bike filled with giggles. Thanks all for ignoring the forecast and joining me for our Mendip jolly. See you all on a ride soon!