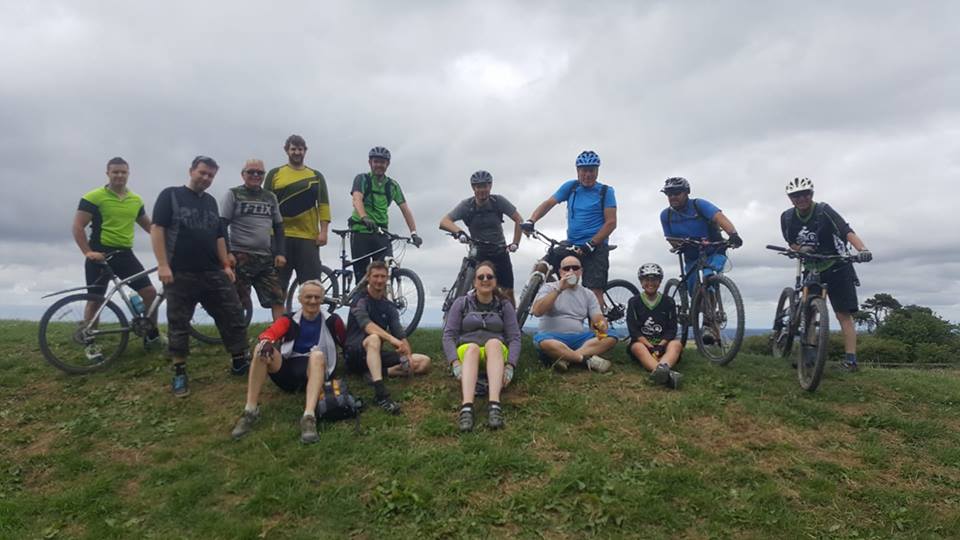 This route was the club route that I enjoyed most when I started with the club.  That day I was pushed to the max of what as a novice I thought I could do whilst enjoying good company in the local countryside.  When Nigel stopped being a ride leader I asked him if he minded if I stole his route.  Being the gent he is, he let me.

Having not done this route for a while I decided to dust it off and did a recce ride on a very windy Saturday in May.  On the day in a fit of enthusiasm (not common for me) I decided to ride up to the start at Barbury Castle.  Puffing up the side of the Castle I feared that I might be over stretching myself.  I got my breath back and rode into the car park to find about ten riders setting up.  Eventually the stragglers arrived and we were 16 of very mixed abiity.  That’s actually what is great about MBSwindon rides.

A quick briefing we headed from Barbury to the byway that has been the subject of much debate this week.  Thankfully the styles had not been added so we headed over the undulating field to the shooting school descent.  I waited at the bottom to see all of the riders down.  Steadily they came and all rode the steep chalk descent well.  It became clear that we were a few down.  Then word got to me that Nikki had, had an off before the descent.  Shaken, but not badly hurt she decided to call it a day on the ride.  A real shame, but a very sensible decision.  Graham very kindly volunteered to help Nikki back to her car and to load her bike.  Saying that he would meet us at the top of the first big climb.

We headed on from there via the byway to the main road between Swindon and Marlborough.  This is where we first encountered the moto cross event that would become a feature of the ride.  They were all pleasant and made way for us, but my do those bikes stink.  At the road I had a choice to make.  Do I try my alteration to the route and climb from Lower to Upper Upham or go with my old favourite/nemesis the radio mast climb.  I decided that the crossing over the road to the radio mast climb was safer and we headed that way.

The climb up to that radio mast is a bit challenging.  I can remember being very pleased with myself the first time I cleaned it.  I couldn’t help, but notice a few grumbles as we got the to the top.  We also had a number of the moto crossers cruising past on their bikes to add to the mix.  While we were waiting for everyone to make the top Graham arrived to rejoin the ride. A short breather later we headed on along the Ridgeway towards Liddington and our next descent.  Everyone seemed to enjoy the chalky double track run down.

We then got to my first alteration of NIgel’s route.  At this point the original ride heads down the road towards Sugar Hill.  Instead we crossed the road and joined the bridleway that runs gradually up to Sugar Hill.  Here we again meet the moto crossers as they tore up Sugar Hill.

We leave them to head along the ridgeline towards Aldbourne and to the first surprise (for me) of the ride.  The path had been quite good on the recce ride, but it has obviously been ploughed in between.  This made what was supposed to be a easy part of the ride hard work.  This hard work was rewarded with the fun little descent into Aldbourne.  Some braved the jump half way down and all had smiles on their faces at bottom.

We took a lunch break in Aldbourne.  Sadly the burger van that was there the first time I ran this route was not in evidence.  All refreshed we headed for my second alteration to the original route.  There were some worried faces as I said I wasn’t sure if the climb to come was easier than the radio mast climb.  At the top I was assured by our number that it was much easier.  Phew.  The route took us to the sadly closed Ramsbury Brewery.

The moto cross bikes made a reappearance as we headed towards the wonderfully named Whitehards Bottom.  Thankfully they were playing in a field at the top of the bridleway leaving us to take the fun run down.  On the recce there was a big puddle of stagnant water at the bottom.  The recent heatwave had thankfully got rid of it.

A short sharp nasty little climb later we headed off towards Rickety Bridge.  It was now evident that some of our number were starting to flag.  That’s where my back marker Debbie showed her worth by coaxing the slower riders on.  I slowed the pace at the front.

When we got to the top of the final big descent I briefed the riders on what to expect (a fun rooty track).  One of our number decided that she had, had enough and decided to start walking.  Debbie and Tony being a stars went with her.  A mechanical at the bottom of the descent meant that they overtook the main ride.

Crossing the main road we headed back up towards Four Mile Clump only to run into two fire engines blocking the trail.  There must have been some sort of fire in the barn up the track.  This forced a diversion off of the main track to a alternative by the gallops,  The grassy trail was hard work to climb on and again I could see that some of our number were tiring (myself included). Catching up with the walking party we decided to ride the final mile.  Taking it steady we headed back to Barbury and the end of the ride.

On reflection I think the route was harder than a lot expected, but all made it.  Including some on their first club rides.  For me it was a fun route to lead with some lovely people.  What MBSwindon is all about 🙂